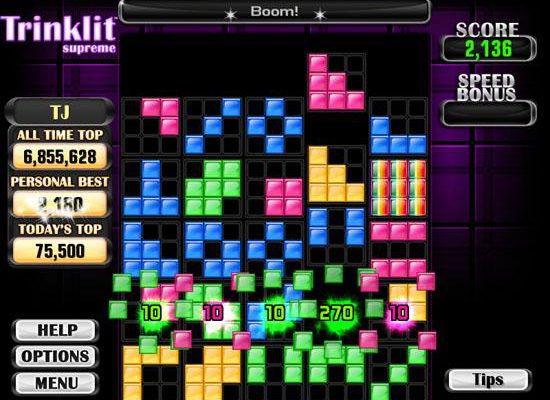 The simplest of casual concept boosted by unlockables and power-ups.

At first, Trinklit‘s premise of fitting pairs of shapes together to make squares probably sounds as challenging and fun as putting together a two-piece jigsaw puzzle. But in the hands of veteran game designer Funkitron, the concept comes alive. Should we be surprised? These are, after all, the same folks who gave us that slots-meets-bingo classic Slingo. Bottom line: if you’re into Slingo then you’ll probably love Trinklit as well.

In fact, if you’re familiar with Slingo Supreme then you’ll notice straight away that the layout of Trinklet is very similar, right down to the plethora of power-ups and bonuses that can be used to shake up the core gameplay and create an almost endless number of possibilities. 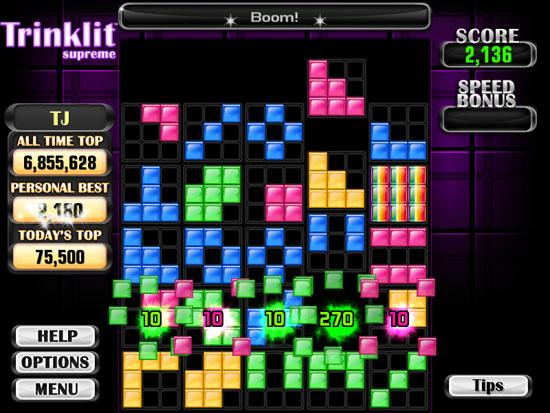 But we’re getting ahead of ourselves. The basic game of Trinklet involves a grid filled with polyominoes (geometric shapes; think Tetris) that are each half of a 9×9 square. The goal is to drag two complimentary polyominoes together so that they form a complete square, thus clearing them from the board. There’s no way to actually lose at Trinklit, but the fewer polyominoes left over at the end of the round, the higher your score will be.

The real fun begins once you start unlocking power-ups. Like Slingo, you can only activate a limited number of power-ups at a time by dragging them into available slots (which, themselves, are unlockable). Each power-up has a different effect on the gameplay, from score multipliers to ones that make special tiles and gems appear, reveal available moves, drop eggs that hatch bonus items, launch mini-games, and even turn certain tiles into molten lava or bricks.

These power-ups – and the ability to mix and match them to your heart’s content – area big part of what makes Trinklit so appealing. For example, if you’re a gambler you can turn on the mini-games power-up, which lets you wager your points on four luck-based mini-games. If you’d rather try to beat your high score, you can turn on the score multipliers are rack up the points. And so on. 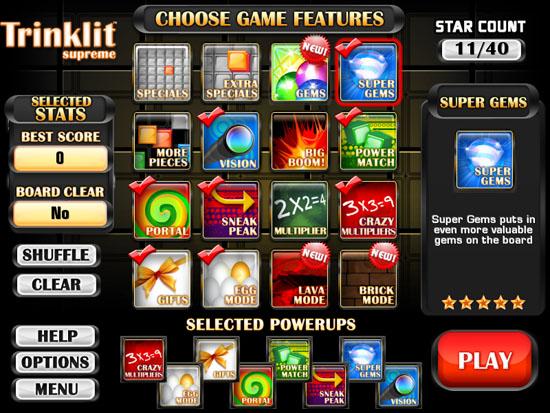 Aesthetically, Trinklit has the sensory overload appeal of a casino slot machine, with bright colors and visual rewards and sound cues popping up all the time to acknowledge speedy matches, color multipliers, and other bonuses.

Like a slot machine, too, there’s no real sense of long-term achievement once a game of Trinklet is over. Make no mistake, you’ll spend many hours focused on earning all of the trophies and unlocking all of the power-ups, modes, power-up slots and other bonus content. But once all of that has been achieved, you can probably expect your involvement with Trinklit to taper off to checking in every so often to try to top your high score (which, given how many different power-up combinations there are can be satisfying in itself) or complete the Daily Challenge – unique objectives like achieving a certain score under certain conditions. In that sense Trinklet is very much an old-school casual game: easy-in, instant gratification gameplay with no way to “fail,” perfectly suited for short bursts of play.