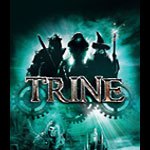 A wizard, a thief and a knight walk into a treasure room – stop me if you’ve heard this one before.  In the treasure room is an all-powerful crystal called the Trine, which merges three different souls into one body.  It may be uncomfortable for them, but it’s fortunate for you.  Now you can rotate between these three characters at the press of a button on an adventure that traverses a world of fantasy overrun by the undead.

The central idea in Trine revolves around using the different abilities of each of these three characters to solve platforming puzzles and do battle with bad guys.  As each of these characters share the same body, using the skills of one class to get to a certain area will make sure everyone involved gets to where they’re going.

Each character has their own strengths and weaknesses, and their abilities reflect this.  The wizard, for example, can conjure a variety of items that will help in your quest.  Boxes to climb on, planks to walk across – he’s like a magical Bob Vila.  His helpfulness comes at a price though as he has no offensive magic.  Sure he can conjure a box and drop it from the sky to squish his undead assailants, but the time this takes makes this a far from practical choice.

Inversely, the knight is something of a no-puzzle powerhouse.  Equipped with a shield and sword, he tackles his enemies head on.  And while he later learns to pick up and move objects, for the most part his puzzling skills leave much to be desired.

The thief rounds out the trio offering a mixed bag of puzzle solving and combat.  Her hookshot can help them reach new areas and her fire arrows can help light the way in darkened stages.  Her skills with a bow can take out enemies at a distance.   But as one might expect, her bag of tricks isn’t nearly as deep as the wizard’s and her combat skills aren’t nearly as strong as the knight.  When it comes to who has what skills and how you’ll need to use these in conjunction with each other, Trine offers up a perfect balance.

The puzzles in Trine are all environmental and never so difficult that you’ll have a hard time figuring out what to do.  These usually consist of "how do I get across this gap" or "how do I climb to that platform" type problem-solving.  What’s neat is that many of these can be solved in a number of different ways.  You could affix one of the wizard’s magical boxes to some spikes to climb over them, or search for a plank of wood to affix the thief’s hookshot to and swing over the chasm.  Playing around with the environment is half the fun in Trine.

What makes this environment such an exciting playground for your powers is a physics engine that’s something of a double-edged sword.  Affixing magical boxes to spiky walls, levitating giant fists around to smash barriers, re-assembling bridges through magic – all of these things rely on a well-developed physics engine.  And while it is well-developed, it isn’t without frustration.  There was more than one occasion where you’d know exactly what you needed to do but had to try over and over to make it happen because the physics weren’t co-operating the way you’d like them to.  It’s not that the physics were wrong – maybe it’s that they were too precise.  Whatever it was, it added a level of frustration that otherwise wouldn’t have been there.

Compounding that frustration was the limited energy each character had to work with.  Things like using magic and shooting fire arrows consumed each character’s energy.  In a perfect world with no hiccups each character would have had an ample amount of energy to tackle the trials in front of them.  But once you start getting into puzzles that you’ll try again and again, this energy runs out pretty quickly.

These weren’t the only stumbling blocks we’d encountered.  While the environments were gorgeously detailed, it was too easy for hazards to be hiding within them.  I lost count of the number of times my characters were injured by obstacles I didn’t notice until I was stepping into them.  We’re not calling for big orange safety cones here, but a little color contrast to highlight dangerous objects would have done Trine a world of good.

The camera also played some nasty tricks on us from time to time.  Stepping on a stone that opens a door, for example, would pan the camera over to the door to highlight it.  Makes sense, no?  The problem is that the action didn’t stop even while the camera was panning.  If your knight is fighting off half a dozen skeletons and the camera trips away for three or four seconds to showcase a door opening, you’re going to have to kiss your knight goodbye.

In terms of downloadable games, Trine is a visual triumph.  Lush, highly detailed environments, gorgeous 3D character models – when it comes to graphical oomph, Trine really packs a wallop.  No two levels look the same in Trine, and each are so rich that you’ll be eager to explore every one of them.  Because of that, we had a hard time putting the game down.  I suppose in that regard it’s kind of nice that you can finish Trine in one sitting, as the game will only take around five hours to complete.

In spite of some of the frustrations we had Trine was a great ride from beginning to end.  Five hours may seem somewhat short, but it’s the perfect length for what’s being offered here.  If you like puzzle platformers this is a title you’ll definitely need to check out.  It’s beautiful, it’s addictive, it’s fun.