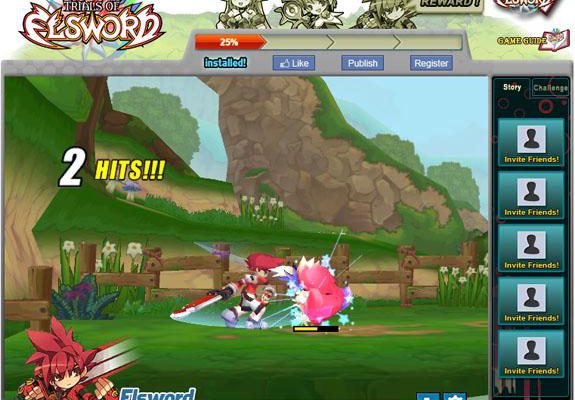 The problem with a lot of Facebook MMOs is that they ultimately feel like trials or demos for the client-based versions of the same games, rather than sincere attempts to make an enjoyable social MMO. The Facebook version of these games often lack features available in versions that are client-based or directly browser-based, like fullscreen graphics and more control customization. Trials of Elsword takes this approach to a whole new level, literally acting as nothing more than a way to promote downloads of the client-based MMO Elsword.

The difference between Trials of Elsword and Elsword isn’t just a few features, either. Trials of Elsword is so stripped-down that it’s better described as a very brief demo than as a game. You can pick one of the three archetype characters and play through a tutorial level exactly once. After you clear the level by beating the Monkey King boss, the game immediately locks the other two playable characters and won’t let you replay whichever character you used first. You can’t play the game again without getting friends to join you in Trials of Elsword. There’s also a play mode called Challenge Mode that you can’t access until you’ve gotten five friends to accept invites to the game. 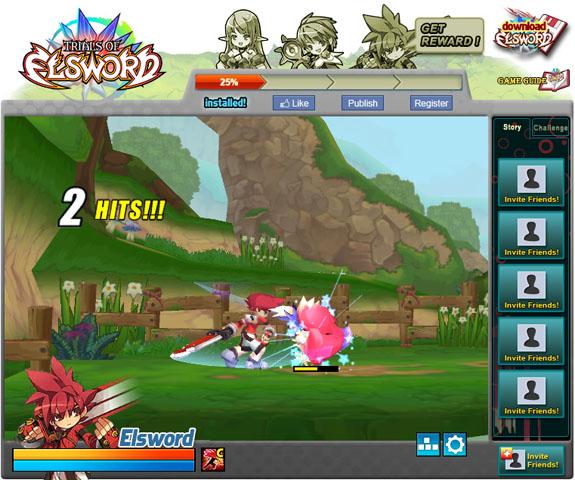 In short, this is a game that you can play for probably less than five minutes until it demands that you spam invites at your friends to do anything else with it. Of course, the Facebook version’s page links directly to the client-based download of the game, which you can probably have fully installed before you can get five people to accept invites into a glorified demo. This is probably the entire purpose of Trials of Elsword even existing, to get people to try out the browser-based demo and then go download the full version of the game.

If Trials of Elsword is anything to go by, then Elsword itself is probably a very fun game. It’s a fusion of 2D side-scrolling action and more typical MMO elements. The backgrounds are bright and colorful, as are the character models. The controls are wonderfully responsive, though the game doesn’t seem designed to be played with a control pad. The emphasis is on doing lots of damage to enemies quickly and racking up long unbroken combo chains. You can keep combos going from one enemy to another if you move fast enough and don’t get hit.

It’s hard to recommend Trials of Elsword itself when it offers so little gameplay itself. The game is really just a demo for Elsword, which is a free download that demands relatively modest PC specs. Anyone who finds the screens or gameplay descriptions in this review interesting is probably better off simply trying out Elsword. Trials of Elsword itself is well-localized, though all of the character voices are untranslated. If you enjoy Nexon titles like Dungeon Fighter Online, though, you’ll probably find plenty to enjoy in Elsword.