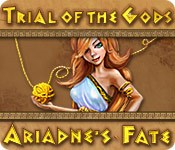 If rescuing the princess was as easy as completing a few puzzles then I would totally be storming the castle right now welding nothing but bunch of Sudoku puzzles , but its seems only in the world of puzzle games like Trial of the Gods: Ariadne’s Fate that you can defeat a Cyclops by matching three or more symbols in a row. Guess I’ll have to stick to my day job for now.

Trial of the Gods: Ariadne’s Fate focuses on Prince Theseus as he journeys across land and sea to rescue his beloved Ariadne from the evil Minotaur and the God of the undead, Hades. This game’s story is somewhat based on real Greek mythology as Theseus was the warrior who entered the maze in Crete to kill the Minotaur, and it was Ariadne who fell in love with Theseus and gave him a ball of thread to help him find his way out of the maze.

Trial of the Gods gives you three modes to play in: Adventure Timed, Adventure Untimed and Ariadne’s Loom, each of which has you playing puzzle boards with symbol tiles on them. In the adventure modes, Prince Theseus is traveling with his crew in order to rescue Ariadne, and you must help him by completing puzzle boards in order to find pearls that have been dropped by Ariadne like a trail of bread crumbs.

On each puzzle board you must keep matching three or more symbol tiles in order to move a pearl tile to the bottom of the screen as to move Theseus forward on the map. One pearl is enough to clear the board within your time or move limit, but dropping more pearls before then will move Theseus faster.

As Theseus moves further on the map, you will come upon new elements for the boards like gems that remove whole rows of tiles in different directions when used or stone tiles that must be removed with matching moves before your pearls will begin to move on the board. Theseus will also come upon special adventure boards that will ask you to complete special tasks like matching three or more shields seven times in order to defend the Harpies. These boards will send you back a few spaces if you fail to complete them within the set limit.

The Timed Adventure will give you a set time to complete each board before you have to move on and the Untimed Adventure will give you a set number of moves you can make. Ariadne’s Loom mode gives you a picture to complete and you must complete tiles matches to move spools of thread down to the bottom of the screen. Each spool of thread completes a line of the tapestry picture.

The game’s hint system was a subtle glow of the tiles in the spot of your next move and a sound effect to alert you to the hint. You also have the option of using blue orbs to remove a bunch of tiles for you in times of need, which you collect via your score points and certain adventure boards. Each mode has an auto-save feature so you can always come back to the last board you left off on.

The first time I played this game; it was 9 o’clock in morning and I didn’t stop playing until around noon as this game is so addicting. The concept of the game may seem simple and not that challenging, but once you get playing you realise the game is a bit more than mindless clicking. The game designers keep adding in new elements to the puzzles as you move along which keeps the game fresh and the board designs require you to really think to move those pearls off the bottom of the screen. The adventure boards especially make the game challenging with their special requirements and timed limits. I know I failed a board or two at least a couple of times each.

Most of the graphics used in the game were cartoonish and Greek themed which looked fine, but there were some 3D character animations used on the map and in the background of the puzzle boards that just seemed out of place. The animations were grainy looking and would have fit in the game better as animated cartoons. The music in the game was a midi based soundtrack with a real groovy jazz sound. Not something you would imagine in a Greek mythology game but it was fun to listen to during game play.

What struck me as odd about this game was the option to print out a board game version Trial of the Gods, which might be a nice option to some, but seems a bit silly to me. Why would you want to play a cheap print-out of the board game when you could be playing the advanced computer game?

Obviously this is one of those games I have to recommend based on its addictive qualities alone, because I feel that any game that can glue me to one spot for more than an hour at a time these days is well worth the money. I know some might see Trial of the Gods as simple looking, but you shouldn’t let a game’s simple exterior deter you from trying it out. At the very least, it’s worth downloading the free trial.