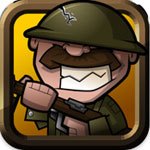 The great Civil War General William T. Sherman once claimed that “war is hell.” While the war in which he fought may have predated World War I by more than half a century, few would argue that his words were just as fitting for those poor young boys fighting the good fight in Europe. Trenches puts you in control of the British Army as its soldiers fought tooth and nail for every inch of land that the continent had to offer. Do you have what it takes to lead the British to victory over unstoppable German forces?

Trenches takes us to the frontlines of World War I in an original new twist on the real time strategy genre. Every battle in Trenches takes place on a fixed 2D field where your armies will travel from left to right. You’ll select which types of soldiers to send to battle and watch as they enter the fray, sending more and more troops as your resources allow. The object of the game is to push back the enemy soldiers through sheer might until you reach the other side of the map, capturing their base.

Bringing real time strategy to the iPhone has been a challenge that no developer has been able to pull off successfully yet, but Trenches seems to have hit on a winning formula. By keeping things 2D on a small map with fixed boundaries, the team at Thunder Game Works have managed to let us enjoy a taste of the RTS genre while creating something completely new for the iPhone.

The campaign in Trenches is comprised of six missions that are more or less identical. The only difference is the size of the battlefield and the soldiers that are available to you. The game offers up six offensive troops, and when playing the campaign you’ll unlock these one after another with each mission. Being only six missions deep, you should be able to wrap up everything the main game has to offer in under 30 minutes.

In addition to campaign, Trenches offers a skirmish mode that is pretty much a cookie cutter experience of the campaign. While you’ll be able to choose options like unit availability and number of trenches, nothing really helps to distinguish skirmish from the main game mode.

Once you complete the campaign you’ll unlock a special skirmish mode that helps break up the experience – zombie horde mode. Rather than fighting live German soldiers, horde mode pits your skills against undead ones. This is more than just a palette-swap – zombies are easier to kill, lack any artillery, and travel in ever-increasing numbers. Make no mistake, these undead military men are no pushovers. The zombies will get you — it’s just a matter of how long you can last.

Seeing something as unique as zombie horde mode shows that the Trenches formula can be adapted for more than what you see in the main game – it’s just a shame that they didn’t show this kind of variety throughout the rest of the offering. Trenches also seems like the perfect formula for online multiplayer, yet multiplayer is nowhere to be found.

The concept and gameplay in Trenches is inspired, yet the lack of variety turns this World War I epic into a war of repetition. Trenches offers up a winning idea but fails to do anything beyond proving its idea successful. On the bright side Trenches appears to have kicked off a whole new genre with lots of room to grow. Other 2D real-time strategy games are already popping up on the AppStore mimicking the design of Trenches to a tee. It’s only a matter of time until one of these games marries this winning concept to a more robust package than what Trenches had to offer.