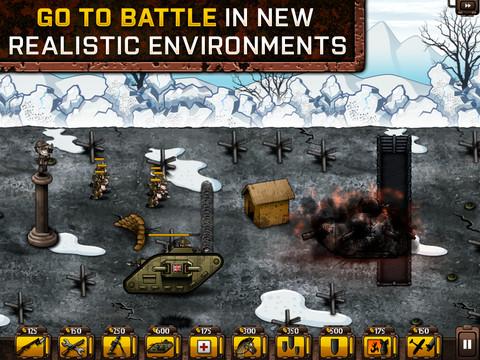 There’s been an incredible amount of anticipation for Trenches II since it was announced earlier this year. Almost two years to the day after Trenches was first released, Thunder Game Works and EA have finally released the game’s true sequel. There’s no easy way to say this, so let’s just rip the band-aid off: Trenches II is a heartbreaker, thanks in large part to some glaring design issues.

Now, admittedly, there are some cool new features here to enjoy. Aside from British and German campaigns, there’s also a campaign for France (and the achievement for winning as that last faction is admittedly hysterical). Additionally, you have a branching series of battles to choose from, and each map is covered with destructible objects like sandbag walls, columns, and small buildings soldiers can take shelter behind. And there are a bunch of new unit types to utilize, including medics, spies, cavalry commanders, and tanks.

The first definitive problem that you’re likely to notice in Trenches II is that it isn’t the most stable of games (at least not during our experience on the iPad). It seems prone to crashing on a pretty regular basis. There’s no telling when the game will shut down, either. It could be right after you start it up —during the opening credits— or it might be in the middle of a large battle. The only thing you can rely on with these crashes is that they’ll lose any level progress you’ve made and you’ll have to start the battle over from the beginning.

When you actually get to start the game, you can go through the tutorial. Don’t bother: It’s beyond painful. As opposed to the Boot Camp section of the first game, the instructions here are vague and poorly-worded; one goal in particular makes no sense and it’ll likely take a bit of random experimentation to solve. Also, the tutorial only teaches you about a couple of the new units (the recon balloon and the cavalry) in the game; other new unit types are completely glossed over with a message that basically says, “Oh, hey, there are these other units, too. We’re not going to show them to you, but you should totally experiment with them later on and figure out how they work.”

The core gameplay here is pretty much identical to what appeared in the other Trenches titles. You start on one side of the screen and engage in trench warfare to hold off your enemies until you’ve earned enough cash to actually start an invasion of your own. The controls from the other games are still here, though the “two finger advance” command (where you swipe two fingers across the screen to get your forces to all march forward) only works about half of the time. Additionally, the AI seems to have been downgraded, since it only seems to send out one unit at a time. In fact, the AI is so basic that levels never really feel challenging.

You can defeat almost every level by setting up a solid defensible position, and then sending out a group of spies to insinuate themselves inside the enemy’s bunker. Once you’ve guided your spies across the map (since they can’t be detected by the enemy unless you de-cloak them), you can just have them shoot spawning enemies in the back since, you know, they’re too stupid to grasp the concept of turning around and firing behind them. After that, you can just march a unit across the map and rack up another victory. Alternately, you can just build a bunch of tanks and then roll them across the battlefield en masse.

While the game isn’t terribly challenging, the campaigns will take a lot longer to beat than those in the earlier entries to the series. Part of this is because of the branching level selection, which is a nice little twist to the overall experience. Another factor, though, is that the level maps are easily three to five times larger than before. While that’s all well and good, there’s no real reason for this extended length. Additionally, later levels are absolutely covered in barbed wire and landmines, which are easy enough to bypass but just slow your progress down to a crawl for (again) no real reason.

Aside from the single-player gameplay, there are also a few different multiplayer modes for you to engage in. If you don’t have a friend whom you can play against over local wi-fi, you can rely on the game’s auto-matching service, though your results aren’t too reliable. Actually, replace “aren’t too reliable” with “broken,” as the service consistently timed out during the review process. 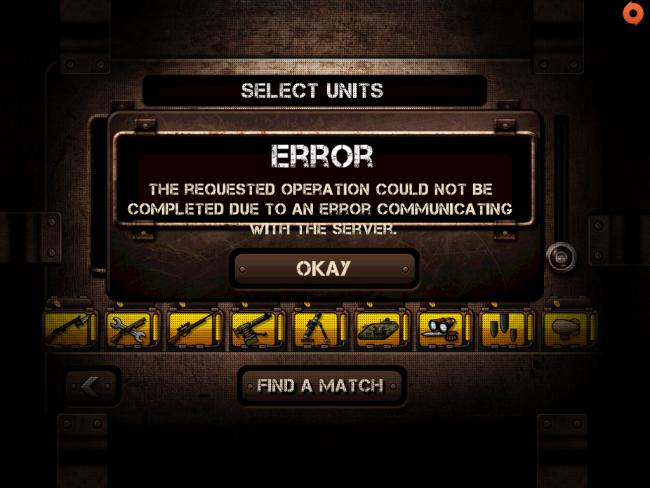 The Perks Points that appeared in Trenches: Generals are back, too, but even these feel poorer for the tweaking. Originally, you would earn points to improve your army’s attributes by completing campaign levels. Now, there’s a freemium component that cheapens the overall experience. You can buy extra points from within the game’s store, and you can also earn some signing up for/logging in to Origin, EA’s much-maligned digital storefront. Before if you had a perked-out army it meant you were a formidable player who had won a lot of battles. Now, it’s just as likely that you spent a lot of money.

Finally, even though the game’s visuals are generally excellent — featuring a number of great-looking environments, characters, and dynamic effects like damage to structures — the graphics aren’t perfect. When a unit crosses the same area that a static object (like, say, an anti-tank girder) occupies, you can actually see visual tearing around the character sprites. Another issue with the iPad version is that the characters are so small on the device’s screen that it’s difficult to trigger their special abilities when you select them.

Trenches II is an incredible letdown. It’s not stable, it shows a serious lack of polish, and, most important of all, it’s boring. What’s really bizarre is that several of these issues are major steps backwards from previous titles in the series by the same developer. As of right now, there’s still a good game beneath all these issues, but it’s going to take a lot of polish to uncover it.