Treasures of the Serengeti Review 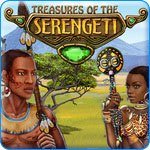 It’s hard to imagine the dry, grassy plains of the Serengeti would be a particularly hospitable location to settle, and it’s certainly not the kind of place where you’d expect to encounter a land rich with colorful gems ripe for the plucking. Treasures of the Serengeti may take more than a few liberties with its premise, but the tribal setting provides a nice backdrop for an unusual blend of traditional jigsaw puzzle and fast-paced gem matching gameplay.

The puzzle adventure picks up just as disaster befalls the village of Tany in the Serengeti. Leaving her home for several months, Asha, the young shaman of the village, embarked a pilgrimage deep into the desert to commune with the spirits of her ancestors. With her quest complete, she began the return trek but was delayed by heavy rains and a massive flood. When she finally did arrive, she learned the entire village had been destroyed by a rampaging herd of enraged elephants. Believing their home was cursed, all of her people had fled except for the chief. Your task is to help Asha rebuild Tany piece-by-piece, by collecting large quantities of four different gem resources and restoring important structures in the village.

Though Treasures of the Serengeti is a gem matching game at its heart, it’s completely different from the typical match-three game variations many casual players are already familiar with. Each level contains a network of grid-shaped baskets that you must fill with interlocking puzzle pieces in order to clear them from the screen. The different kinds of jigsaw puzzles pieces you can pick from to accomplish this goal appear in a column on the right side of the screen, and every piece contains a gem imbued with one of four colors (red, green, blue, and purple).

You’ll use the mouse to pluck pieces, drag them to the baskets, rotate them to fit, and drop them into place. Once all of the slots in a given basket are filled, it will disappear and the gem colors you placed will be added to your totals. There’s a specific quota for each color gem that must be met in a level before you can proceed. Also, the entire playing field slowly inches towards the left side of the screen, and you’ll lose if any gem baskets touch the edge. This forces you to think quickly and clear baskets as fast as possible. The pace is slower early-in in the game when there are only a few factors to worry about, but the intensity gradually increases as new twists on the formula are thrown into the mix.

For example, some baskets can only be filled with specific colored gems. Others require puzzle pieces to be fitted with exact precision, both on the inside and outside edges of the basket. There are also rune pieces that give extra gems if you can attach them to the proper color and other unique elements that force you to strain your brain a little harder on the fly. Making sure you also end each stage with the required quota of each gem type in your coffers is also challenging. You’ll eventually earn some helpful items like a hammer that destroys poorly placed pieces, a universal puzzle piece that fits in any slot, and even an hourglass that temporarily stops time.

In between every level you can spend your hard-earned gems to restore areas of the village. This sometimes opens up fun musical mini-games focused on completing unique puzzles to recover the village’s missing musical instruments. In once instance you’ll tap sacks hanging from trees to match them based on the sounds they make, and another has you placing rocks in baskets to change the pitch of a large stringed instrument to match a certain melody. These diversions are sporadically placed to change things up slightly every so often.

Beautifully crafted, both visually and in terms of the gameplay itself, Treasures of the Serengeti takes an unusual set of ideas and really runs with them. The game’s familiar puzzle concepts are blended in such a fresh and interesting way that it’s impossible not to get hooked once you start playing. Early levels ease you into learning how the game works, though things really get challenging and frantic as you progress deeper into the adventure. This keeps the gameplay from growing dull. What a pleasant surprise this one turned out to be.