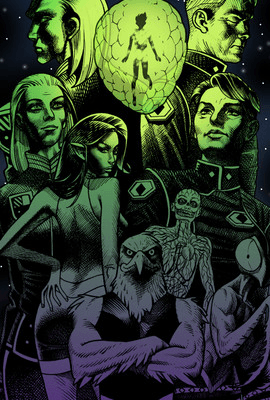 Space pirate adventure games are as common as star-lice on the hull of a space ship, but that’s because they remain fun no matter how many times you set sail for fame and glory. Plus, space is vast and mysterious, so it’s easy enough to pen endless mythologies around it. By comparison, we already know that sea-bound pirates stole a bunch of stuff and had a problem with their teeth falling out. Exciting.

The Treasure Seekers of Lady Luck is an interactive novel about a band of intergalactic “treasure hunters” in search of loot and fame. It falls a bit heavily on the genre’s clichés at times, but its quick pace, crisp writing, and myriad story choices should keep you engaged without a problem.

You begin the game as an Earthling who’s left saddled with massive debts after your parents die. Turns out your folks didn’t borrow from the kindest people in the universe, so you flee to the stars. The vessel you’re on suddenly blows up thanks to a mysterious net-like object that’s hanging around in space, but thankfully you’re quickly picked up by a band of space pirates. They take you aboard Lady Luck and offer you a chance to join them. 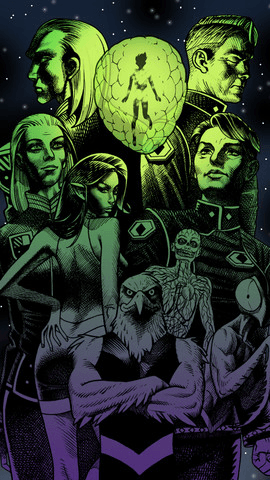 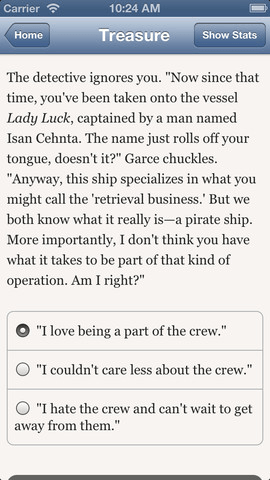 The Treasure Seekers of Lady Luck lacks graphics, music, or sound effects. It is essentially a digital Choose Your Own Adventure book—though your range of choices is far greater than anything that Scholastic’s series has ever offered. Either way, whenever you encounter a new friend, a new character, a new city, or a new alien, it’s your imagination’s job to give them a body and a voice.

You need to give yourself a personality, too. Will you cooperate with the pirates, or resist their attempt to recruit you? Will you follow the Captain’s orders to behave, or stick your nose where it doesn’t belong? Will you get along with the crew, or blow them off? Will you be loyal to the pirates’ life, or will you go undercover for the fuzz and help turn them in?

Most importantly, what’s your special talent? Science? Infiltration? Fighting? Your specialty has a direct effect on what you can do, where you can go, and how you can solve the crew’s problems. 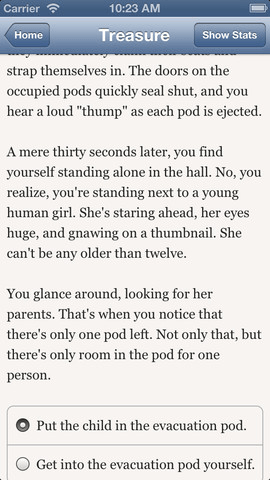 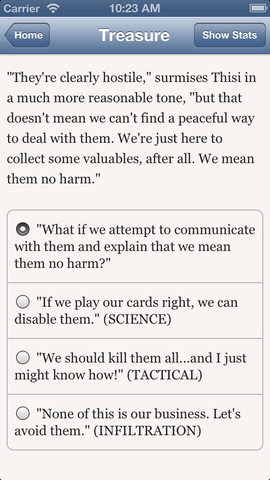 There are dozens of different ways to play through The Treasure Seekers of Lady Luck, which makes the game a lot of fun to read and navigate through. Author Christopher Brendel is a veteran adventure writer, and it shows in his descriptive prose and quick-moving dialogue. There are some hiccups in the narrative, though, particularly in the form of sci-fi clichés. You’ll meet the sexy alien chick that immediately wants to get into your pants (which will happen regardless of whether you play as a male or a female, so it’s nice to have the option for a same sex relationship), the arrogant bird-person, the slippery shadow-person, the silently-suffering ship Captain, and so on.  They’re all familiar, but to be fair, they’re still pretty likable.

The Treasure Seekers of Lady Luck won’t blow your mind with originality, but it’s still a perfectly pleasant and fun way to pass a few hours. Yo-ho, yo-ho, a pirate’s life for thee.