For a brief time after Treasure Isle‘s initial flush of glory, treasure hunting games all but choked Facebook. Now you see them less frequently, which makes seeing a fresh take on the genre like Treasure Quest HD all the more special. Treasure Quest HD combines the basic play mechanics of a Facebook treasure hunt game with the trappings of RPGs. So instead of yet another greedy island-dweller, in Treasure Quest HD you play as a wizard that’s illuminating areas of a mysterious map. There are the typical gates to unlock with brightly-colored crystals, but also monsters to defeat with magic spells, NPCs to help, and quests to fulfill.

There’s very little that Treasure Quest HD adds to the treasure hunt game formula, most of it tying in with the RPG theme. There are more sets of collectibles to complete per map than is typical of more linear games like Treasure Isle, and it’s more likely you’re going to need to get the very last item in a set from a friend. Energy regenerates at a brisk pace, but individual area maps are frankly enormous. You can grow crops to get back energy, spend money on quick refills, or hope your wizard uncovers food while illuminating tiles.

Occasionally you come across a block of tiles patrolled by an enemy, usually something mean but cute like a vicious ladybug or little round robot. Each enemy type has an elemental weakness to one of the five types of magic your wizard can cast (fire, aqua, charge, air, and holy). Select the right type of spell and if it’s potent enough, you’ll blast the enemy away in a single shot. You can power-up spells and unlock new ones by brewing spell components you find while exploring maps. The most common element (inexplicably referred to as “very rare” in-game) is Fairy Dust, while more potent spells demand combinations of Fairy Dust and other reagents.

Other times you may find friendly NPCs inhabiting part of a map. In one early map, a herd of unicorns graze in the field you’re illuminating. A quest here asks you to feed them hay you uncover in this particular location. While this is a minor amount of variation, it still adds interest to the formula. The game is helped by extremely bright and detailed 2D graphics. It runs at a much higher resolution than traditional Facebook games, but didn’t quite seem to merit the “HD” moniker in the title. It still looks very attractive, with each new map offering new brightly-colored elements. 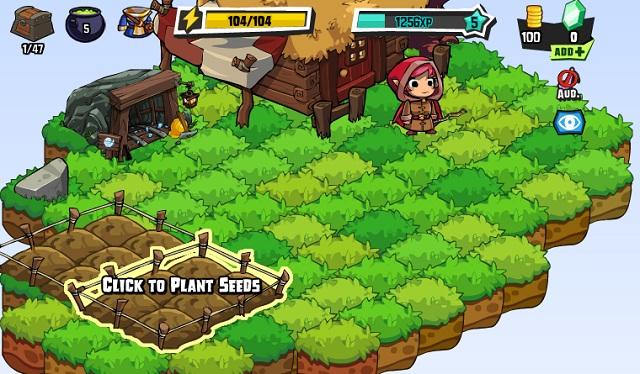 The basic appeal of treasure hunting games is the thrill of discovery (is there a treasure on this tile? Or this one?) and the moments of delight you experience when you uncover something wacky or fantastic. Treasure Quest HD understands this very well and the whole game feels optimized to deliver moments of delight, either at a new treasure you’ve obtained or a cute-looking critter you’ve discovered. Treasure Quest HD doesn’t offer any genuinely new gameplay, so a player burnt out on treasure hunt games may not enjoy it. But anyone who’s new to the genre may find themselves hooked.