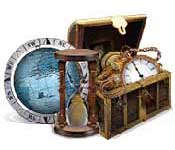 When you think about hunting for hidden treasure, you’re probably picturing a dashing archaeologist like Indiana Jones. Despite the romance of outrunning giant boulders and pits of snakes, most amateur treasure hunters rely on simple shovels, metal detectors and diving rods to seek out their miniature fortunes. Treasure Masters, Inc. is a hidden object adventure that takes players across 48 levels, including numerous inventory-based puzzles and just under a dozen mini-games. You won’t even get dirt under your fingernails.

Gordon Jones is shocked when his adventure-seeking Grandpa Jack disappears mysteriously while flying over the Pacific Ocean. He’s even more surprised to find out that he’s the sole heir, set to inherit the family treasure hunting business. It seems that Jack had some sneaky rivals and business competitors who had plenty of reason to put him out of business. Can Gordon solve the mystery of his Grandfather’s disappearance while still taking care of business?

To complete each chapter in the game, you’ll need to locate all of the items in the rooms on your map screen. Some of these items are described in words, while others are shown as outlines. Along with hunting down objects, you’ll also find yourself completing many challenging inventory-based puzzles. These will require finding certain items on your list, and using them to complete various tasks, such as catching a butterfly with a net. Puzzles that require inventory items will be highlighted by a briefcase cursor.

Other times you must manipulate objects to reveal items on your list, like opening the blinds to see the moon. These spots are highlighted by a hand cursor when scrolled over. Often you will need to look inside an item to find more hidden objects, like opening the refrigerator to find a cake, or sorting through drawers to find an assortment of items. The inclusion of multi-step processes to uncover objects adds a great deal of challenge to the overall game play.

At the start of each chapter you’ll be given a number of hints. You can buy additional hints by finding golden coins and exchanging them (3 coins = 1 hint). If the hint redirects you to another room or area, it doesn’t count against your total.

Players can select between relaxed and timed modes. In timed mode, you’ll be asked to beat the clock, and failing to meet your goal means you must replay the entire (long) chapter. In relaxed mode you can take as long as you like, however clicking incorrect objects darkens the screen until eventually it’s pitch black. The screen will gradually brighten again with no penalty, so this serves to act as a deterrent for random clicking rather than a true punishment.

It’s possible to switch modes during gameplay, but doing this will require you to replay the current chapter. Given the length of each chapter that’s rather undesirable, so it’s best to try and change modes after you start a new round.

This is one of those games that grows on you the more you play. It’s biggest strength is the overall challenge of finding objects using multiple steps. For example, you spot a key which is at the bottom of a fish tank, but there’s a man-eating piranha inside. You must first flip off the light to see the fish net. Then, use the fish net on the carnivorous fish. Once you’ve freed the key, you can finally open a cabinet where other items are hidden. This type of process adds a lot of depth, and makes Treasure Masters, Inc. stand out from the other hidden object games that flood the market.

If you decide to play in timed mode, you’ll find it extremely tough to win. The game is slightly different each time you play, so you can’t always benefit from past experience either. Unless you’re a die-hard fan and whiz kid when it comes to hidden object games, relaxed mode should prove challenging enough for most players. It’s a real bummer if you lose right at the end of a timed round, and must replay the whole chapter to continue.

On the downside, the graphics are done in photo realism which is slightly blurry, though it doesn’t strongly impact the experience. The characters are also a bit unusual, with faces that appear pasted on bodies in a sometimes awkward manner. You might also want to play with the speakers off, since the background music is short and loops continually, so it can get a bit irritating if you play for extended periods. However, the overall challenge of the game makes up for any small frustrations over the production values. The story itself is pleasant to follow, with good dialog that allows users some interactivity, although it’s not particularly original or engaging.

With so many hidden object games to choose from, it’s great to see one that attempts to stand out from the crowd and requires a bit more from players. If you’ve gotten bored with the normal click and find routine, Treasure Master’s, Inc. offers a more complex hidden object challenge that encourages players to think and really explore the gaming environment. It’s geared for experienced gamers, rather than newbies to the genre, which definitely makes one worth checking out for hidden object junkies.