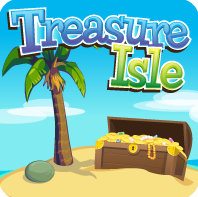 Zynga’s Treasure Isle is a profoundly simple game, but in gaming simple concepts can be the most compelling. In Treasure Isle, you are a treasure hunter who digs for treasures on deserted isles until you get tired and have to go home. You can decorate your island home and tend to your garden while you wait until you’re well-rested enough to go hunt for more treasure. That’s the sum total of what Treasure Isle has to offer.

A derivative game like Treasure Isle has to answer the question, “Is this version of the formula worth playing?” “Yes” happens to be the answer here, as Treasure Isle is at its core everything a casual social gamer could want. It’s simple, fast-paced, and fun without becoming too much of a time sink.

Treasure Isle’s social dimension consists largely of gifting. The contents of each tile on each of the game’s many islands are randomized differently for each player. The overall goal of the game is to collect and “vault” (to borrow a Mafia Wars term) complete sets of themed treasures. You probably won’t obtain every treasure in every set on your own. You’ll need to get the treasures you miss as gifts from Neighbors who are also playing the game. Likewise, your Neighbors need treasures from you.

Treasure Island’s only real weakness as a game, right now, is a certain one-dimensional feeling to the gameplay. Game sessions consist of digging for treasure until your energy winds down, and then there’s not much else to do. You can only buy so many decorations for your island before you run out of money or room for more stuff. There’s little need for micromanagement, besides keeping track of a wish list of treasures you need from other players.

Game sessions are fun while they last, of course. You may be tempted to buy energy refills if you’re just tiles away from clearing out a particular island. It’s hard not to wonder if you’re simply going to run out of islands to dig up at some point in the future, though. Logic dictates that you should, with need for energy and gems and other things just slowing down the inevitable. Treasure Isle‘s long-term appeal may be dictated entirely by how diligent Zynga is in keeping the game updated.