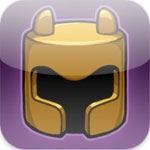 Step into the shoes of Alya Loot, a young thief trying to make her way in the world. Accepting a job offer, she'll need to rob the richest families in town to try and earn her way up to the title of master thief. To do that though, she'll need to sneak around homes, pilfer property, and avoid guards at every turn! Treasure Grab offers up a terrific blend of top-down exploration and stealth gameplay in a way that's unique and fresh — a perfect fit for the iPhone.

As young thief Alya Loot, you'll be breaking into the homes of four noble families in an attempt to rob them out of house and home. Each of these homes has three distinct areas that you'll be robbing, and each of these areas has an heirloom hidden away in one of its many rooms. While your score is directly linked to how much you steal, these heirlooms are the real object of the game. Once you've found all three heirlooms in a house, that family will leave town in shame and poverty.

You'll be able to revisit each area as many times as you want to before you drive the family out of town, and the game will remember exactly what's been stolen on a previous attempt and what hasn't. This means that you can revisit a house as many times as you want in an attempt to steal every last piece of property that's not nailed down, as well as continue your hunt for precious heirlooms.

Many critics are comparing the gameplay to Pac-Man, but such a comparison only paints a fraction of the picture. While there are certainly similar elements in the two games — both offer a top-down perspective and require you to explore a maze-like environment collecting objects — Treasure Grab is as much about stealth as it is about object collection.

Each area is patrolled by a number of guards and maids. Should Alya been seen by either of these it will lead to a relentless pursuit. The only way Alya can shake off these patrol units is to stay two steps ahead, leading them through a series of rooms until they eventually loose track of her. It's a frantic, adrenaline-pumping experience — but the real challenge is in avoiding being seen in the first place.

Alya has some help in her attempts to remain hidden. She can choose from a variety of spirit companions who have some tricks up their sleeve to help speed and protect her along the way. There are spirits that let you see other parts of the map, spirits that speed up item collection, and spirits that disguise you as a maid. As you progress through the game you'll unlock more and more spirits with different abilities. You'll only be able to bring one of these with you at a time though, so there's an added level of strategy to be found in figuring out which power-up is right for which level.

Treasure Grab is an addictive little puzzle game that finally brings a top notch taste of stealth action to the iPhone. The controls are responsive, the level design keeps you on the edge of your seat, and the guard patrols are balanced with perfect fairness. Our only complaint with Treasure Grab that there wasn't more to be had. All 12 heirlooms and the final stage can be completed in a little under two hours. Once you've learned the maps inside and out there's not a lot of reason to play it again. Even though it's a fairly short experience, it's well worth the $2.99. Treasure Grab is one of those rare must-have iPhone experiences. Now quit reading, and get stealing!