Home / Reviews / Travelogue 360: Rome – The Curse of the Necklace Review

Travelogue 360: Rome – The Curse of the Necklace Review 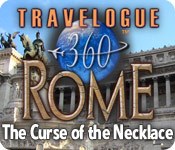 Undoubtedly, in the world of hidden-object games, the Travelogue 360 series stands out by nature of its more immersive, 360-degree interface featuring a patent-pending mechanic that employs photos of historical locales to create a more authentic environment. In essence, it places you at the center of the experience.

Where did it start? First came Travelogue 360: Paris, a panoramic object hunt for baguettes and baggage in the City of Love. The second installment, Travelogue 360: Rome – The Curse of the Necklace, transports players to exciting landmarks that only Rome has to offer.

Truly, the Travelogue 360 games need to be experienced to be fully appreciated. Their high-resolution, 360-degree environments and photorealistic imagery make for a unique seek-and-find encounter. While every other game in the genre presents a single, screen-size snapshot on its world, Travelogue 360 ups the ante by allowing you to view each location in its entirety – up, down, left and right. Plus, you can even zoom in for a closer look.

Travelogue 360: Rome, set during the nineteenth century, centers on a long-fabled noble family who disappeared over 200 years ago, their destiny drastically altered by a diamond necklace possessing mystic powers. The mystery leads you from one historic landmark to another as you travel from the Coliseum to St. Peter’s Square to an Etruscan village and other destinations collecting clues en route via letters, postcards, newspaper clippings and photos.

Two modes of play greet the would-be adventurer, Explorer and Tourist. In Explorer Mode, you race the clock across more than two dozen Roman locales, while Tourist offers the same excursion at a relaxed, timer-free pace. However, most players will find the clock less than menacing in the former mode, easily completing each location with time to spare.

The Travelogue, a scrapbook of sorts, is your source of information and clues – a repository for the letters, cards, clippings and pictures you acquire. This includes Fun Facts, too, interesting bits about each landmark. The Travelogue is also your means of returning to landmarks you’ve already visited and replaying mini-games previously encountered (described below). Upon completion of the game, it provides the full text of the mystery.

Your ticket to navigation, though, is the City Map. Click any active location and you’ll be whisked there immediately. Employing a chapter mechanism, several locales are available at any given time and the goal for each is identical – collect the items on a Word List. Unique to the Travelogue 360 games, however, as you peruse the environment, names of objects on the list highlight when they become visible in the current view.

As for changing perspective, it’s accomplished via a 360-degree compass, by using on-screen arrows or with the keyboard’s arrow keys. Zooming is handled with an on-screen slider or scroll wheel (if your mouse is so equipped). Most objects are of the generic variety – household items, produce, toys, animals and other everyday things. However, each scene includes a special Collectable, too, one that can be traded for clues at the Old Emporium.

Once you’ve collected all objects in a chapter, you’re presented with a mini game. These include Spot the Differences, Jigsaw, Word Search, Scopa and Camera Bag. In Spot the Differences, two scenes are presented side-by-side with subtle differences you must identify. Jigsaw is exactly what the name implies, a puzzle to be assembled. Word Search challenges your ability to locate words that match items pictured. Scopa is a traditional Italian card game of matching values (a tutorial is provided). And, finally, Camera Bag is a Pack-Your-Suitcase style game where you match items with their silhouettes.

From a design standpoint, Travelogue 360: Rome offers great visuals, wonderful music and a solid hidden-object implementation. Each location is expertly rendered with a collection of items that look much less “out of place” than other genre favorites. Indeed, they appear more a part of the environment than pasted images. The artists and developers deserve a hearty round of applause for a job well done.

Honestly, finding nits to pick is a tough job, but a few exist. Longer Word Lists wrap. So, you have to scroll to see all the objects listed. Displaying the whole list at once makes more sense, especially given the game’s highlighting system. Moreover, you can’t increase the challenge of finding objects by disabling highlights. As such, veteran hidden-object fans will breeze through the game much too quickly (you can easily see Rome in a day…or less). Last, the Word Search mini game is a bit enigmatic. It’s sometimes difficult to know what word to look for based on an object alone (is it a statue, sculpture or torso?).

Still, Travelogue 360: Rome – The Curse of the Necklace is a sumptuous feast for genre aficionados. Say, “Hello, Rome!” and “Arrivederci, $20!” It’s an enjoyable romp and travel well booked.