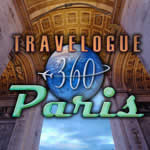 If you’ve ever dreamed of climbing the Eiffel Tower, taking a stroll through the Champs-ElysÃ©es, or breathing in the aroma of fresh baguettes from the local boulangerie, Travelogue 360: Paris is probably the closest you’ll get to the City of Lights without actually buying a plane ticket.

In the latest title from Big Fish, you take on the role of a “Travelogue 360 Adventurer” on assignment in Paris, France, where your job is to tour the city, visit its most famous locations and gather souvenirs to be featured in an upcoming article in Travelogue 360 magazine.

The game’s formula is based on the tradition of ever-popular hunt-and-peck titles like Mystery Case Files and Hidden Expedition: Titanic. For each location you visit, you’re given a list of items scattered throughout the scenery that you’ll need to find.

However, instead of limiting players to the confines of a single screen, Travelogue 360: Paris expands the game world into a panoramic 360-degree environment. You can look in any direction, including up and down, and even zoom in and out using the keyboard or mouse. The scenery rotates seamlessly, giving the impression that you’re actually standing right in the middle of the location rather than looking at one piece of it from afar.

There are 22 different historic and beautiful locations in and around Paris to visit, from the Arc du Triomphe to the Church of Saint-Sulpice and Usse Castle. Each scene is rendered in impressive detail, made all the more impressive because the 360-degree approach allows so much more of the setting to appear.

Granted, navigating the 360-degree environments is a bit more difficult than the standard one-screen approach, but the game offers a tutorial to ease you into the new way of thinking. There’s also a generous hint system in the form of radar-targeting that helps you zero in on the location of items. The radar can be used an unlimited number of times and doesn’t drain time off the clock; however, it does take some time to recharge itself after each use.

During each game level, you’ll take a tour around the city, stopping off at a handful of different sights along the way. When you visit an area for the first time, it is added as a stamp on your passport, and in between levels you can click on any of your stamps to read interesting facts about each location. You’ll visit areas more than once in the course of the game’s 100+ tours, but each visit will be slightly different in that you’ll have a different set of items to look for each time.

After completing a tour, you’ll move on to a bonus stage where you’ll have to complete a mini-game like completing a short jigsaw puzzle, selecting matching postcards from a big pile, or packing all your souvenirs into a suitcase so that they all fit without overlapping each other.

The first of two game modes, Explorer, challenges players to find all the items in a given tour before time runs out. The second, Tourist mode, has no time limit, allowing players to experience Paris’s rich locales without feeling rushed.

If there is a downside to this game, it’s that the momentum seems to stall around level 13 or so. After all the locations have been visited once, and all corresponding stamps have been collected in the passport, the game just keeps going by sending the player out on more tours to locations they’ve already visited. It’s a bit anti-climactic, and doesn’t give the player a clear idea of when the game is supposed to end.

However, by introducing panoramic environments to a genre traditionally rendered on a single screen, Travelogue 360: Paris has certainly taken game-play to the next level, and has ramped up the challenge (and visual rewards) in the process. And what better place to debut the new technology than the gorgeous city of Paris? We can only imagine what London, Tokyo or New York would look like.