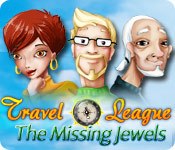 These days, hidden object games tend to fall into two categories: those that make a valiant effort to innovate within a genre that has already been thoroughly explored, and those that come off as a little more than an attempt to cash in on our obsession to search for stuff in crowded pictures. Travel League: The Missing Jewels is, unfortunately, a member of the latter group.

Players take on the role of Alex, a young woman enlisted to help find the stolen jewels of an ancient and mysterious group known as the Travel League, of which her grandfather is a longtime member. She travels to cities around the globe, talking to locals who provide information on what has happened to each piece.

This formulaic narrative is vaguely interesting, providing dialogue which, though free of typos and grammatically sound, never quite manages to fully engage our curiosity, due mostly to a cast of culturally stereotypical characters and some repetitive and slightly absurd mission objectives (it seems Alex is always being told to clean up areas before she’ll be given information about the whereabouts of someone or something).

Still, it’s a rare hidden object game manages to capture our imaginations with its story. The reason we play these games is to challenge ourselves to find cleverly hidden objects hidden in pleasantly rendered scenes.

Each scene we visit is a mishmash of low-res photography and obviously copied-and-pasted objects. Take the Forum in Rome. The view is from ground level, with rocks and grass in the foreground and ancient ruins in the back. The grass and stone lack definition, coming off as little more than splotches of green and beige, while the objects hidden around them-a gear, a soccer ball, a lightbulb, a playing card, a pilgrim’s hat, a plate-are small, out of place, and often purposefully discolored so that they blend in with the environment. Lazy and a bit unfair are the descriptors that jump to mind.

Indeed, my biggest beef with the game has to do with the objects for which we hunt. Most are humdrum while others are almost unrecognizable. There were probably a dozen items which, even once found, I had difficulty properly identifying, including a brown mess that was apparently supposed to be mushrooms and an oversized boomerang that looked rusted, of all things.

There are also several instances in which we are simply provided poorly defined clues. I was directed to find a hook on one level that had a few different hook-like objects, including a fishing lure and a winch. Ditto in another level in which I was tasked to find a bottle, but wasn’t told whether it was a wine bottle or milk bottle (both of which were present). Higher quality HOGs make a point of precisely delineating the exact nature of the objects sought in order to avoid this sort of frustration.

The good news-or bad, depending on your point of view-is that we never get stuck for too long because the game inundates us with help. Though we must find only nine objects in most of the game’s scenes, we’re provided one hint, which shows the exact location of a single object, for each scene as well as a helping bird, which will fly around the general location of an object. You can also opt to see each object’s silhouette with no penalty. Plus, most levels have several hidden butterflies which, when found, add additional hints to your store of hints, which gets carried over from one scene to the next.

I used these aids liberally and still had more than 40 hints left over by the end of the game.

On the subject of the end of the game, you’ll arrive at it quickly. It takes a little more than two hours to go through the 30-odd scenes, which you’ll visit just once each over the course of the story. This includes the time it takes to work through the one-off and quite disposable bonus puzzles associated with each of the jewels we find, which last a couple of minutes and have us doing things like matching up arrows on a ring of concentric circles and guiding pieces of a ruby heart together with a magnet.

Though technically sound, Travel League: The Missing Jewels is difficult to recommend. It’s awfully short, it suffers from lazy puzzle design, and the art direction is uninspired. HOGs may be popular, but that doesn’t mean HOG players will gladly consume anything developers throw at them. Let’s hope Tiki’s Lab puts a bit more effort into the sequel, which, based on the game’s ending, seems sure to come.