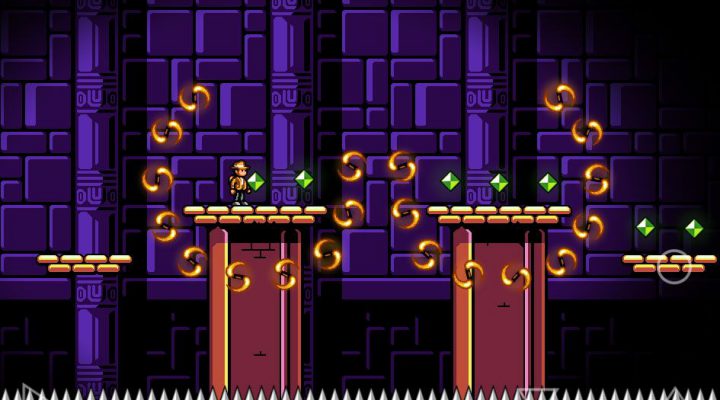 Unique twists make it a much better fit for mobile than you'd expect from the genre.

Like other games in the genre, it's likely you'll have at least one moment of feeling completely without a clue on what to do next.

I like to explore. More than that, I like to find stuff. Some people can scratch their exploration itch with games like Minecraft or Dear Esther. Not me, though. When I explore, I want to find new tools that let me go back and explore in places that I couldn’t before. I want to uncover every square inch of an intricately planned map. I want to be master of my domain.

I want to play Metroid.

I’m not alone in this feeling. There’s a reason why the term “Metroidvania” has come to describe an entire genre of backtracking, exploration-based platformers. They’re challenging, head-scratching — and if you manage to reach the end, completely satisfying. Traps n’ Gemstones is no exception. 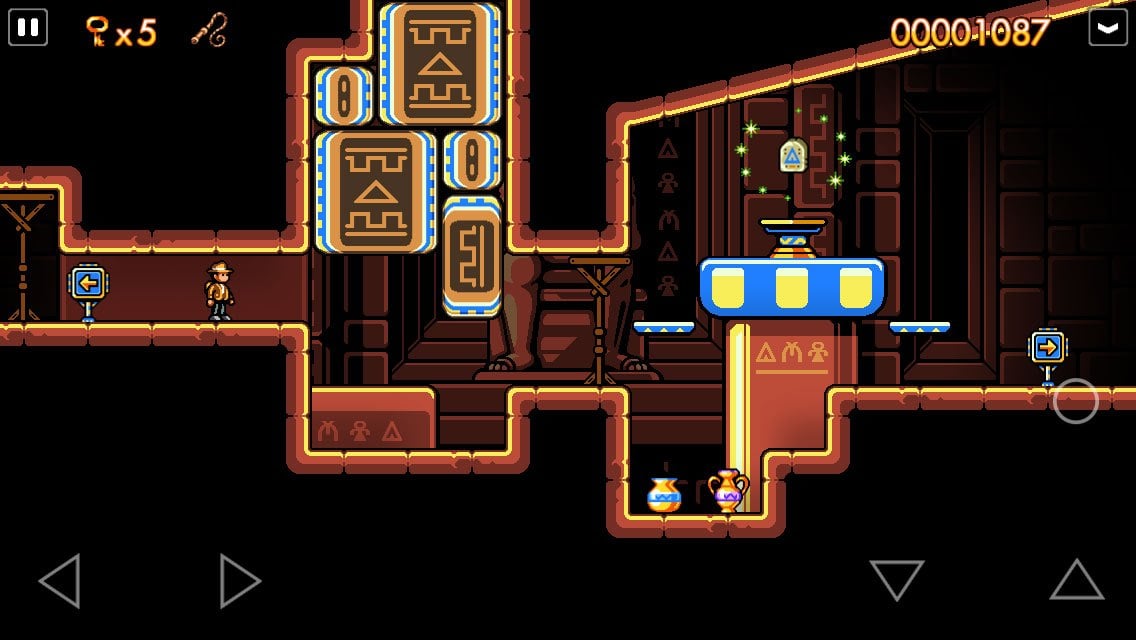 Players take up the role of a fedora-capped explorer as he delves into an ancient pyramid in an attempt to find 25 artifacts and return them to where they belong. You’ll start the game with little more than two feet and a heartbeat, but you’ll quickly pick up a trusty whip – the first of 10 unique items that will allow you to reach areas that were otherwise inaccessible. (How does a whip do this? YOU CAN’T JUST WALK THROUGH A MUMMY, THAT’S HOW).

The controls are simple and reliable, yet offer up enough variety that you’ll find yourself engaging in any number of different activities. Rocks in the way? Your whip button will magically become your pick axe button. Need to roll through a tight spot? The down arrow is here to help. With only five buttons on the screen (up, down, left, right, action), user interaction become intuitive very quickly. 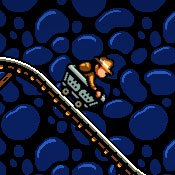 And you’ll be grateful for how intuitive those controls are once you start exploring, because some stages can be downright cruel.

A good Metroidvania lives and dies by its level design, and this is where Traps n’ Gemstones really soars. In offering up 25 artifacts to collect, 25 altars to find, and 10 essential items, you’ll find yourself bouncing back and forth all over the map. Rooms come in a variety of styles, sometimes featuring simple puzzles, sometimes just classic “try not to die” platforming goodness.

At times the game seems like a love letter to gaming tropes, though it never overdoes it. Minecart and underwater stages are staggered perfectly. There’s even a rope-descent that couldn’t help but call memories of Donkey Kong Jr. to mind, and a much clearer homage to the barrel-shooting stages of Donkey Kong Country.

Donut Games has made a brilliant Metroidvania. It’s the most fun I’ve had since Guacamelee, and arguably the best example of the genre on mobile. But that brings about the real question — how do you make a lengthy back-tracking platformer that’s appealing to mobile gaming sensibilities?

Maybe it’s because they have 38 other mobile games under their belt already, but it turns out that Donut Games has a very good answer to that question. (Or more accurately, three answers). 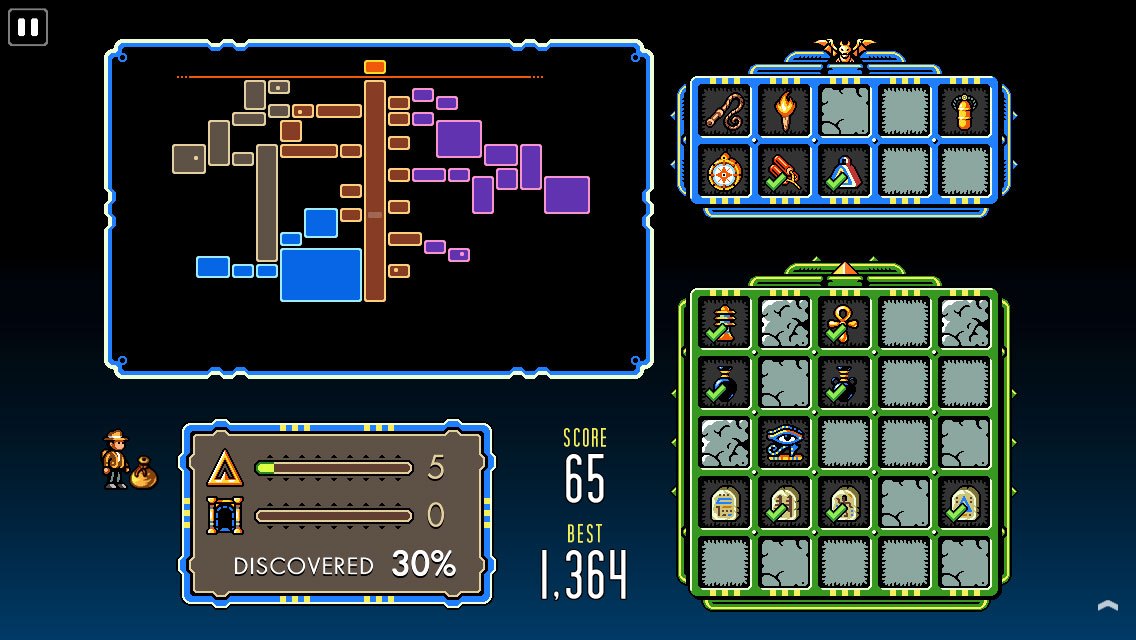 First, the map isn’t terribly large. It certainly feels large as you’re exploring it, but Traps n’ Gemstones ties everything together with a single mineshaft in the center of the map. Because of this, no room is ever more than a two or three minute journey from another. So if you’ve found a new artifact, but the map is showing you that it needs to be placed on the other side of the pyramid? No sweat – you’ll be there momentarily.

The game also fosters a great spirit of competition with your friends, but it does so by awarding points only so long as you stay alive. You’ll collect coins and gemstones to earn points, but with every death your score will reset to zero. So it’s not about how far you’ve progressed in the game — just how far you could progress before being devoured by a giant spider or impaled by an arrow. 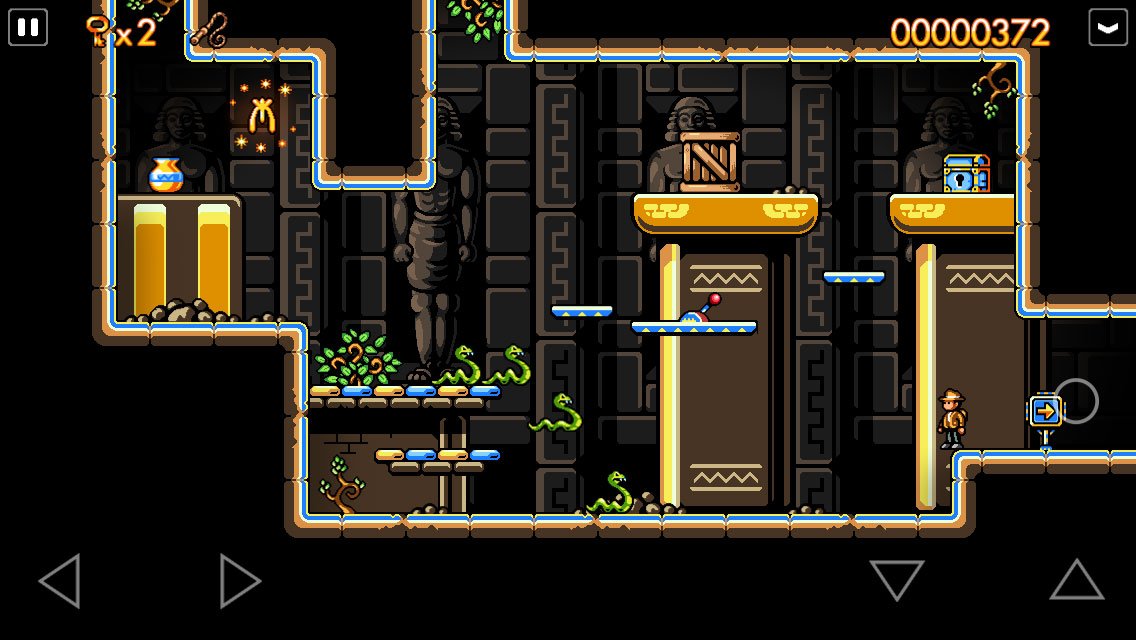 But the biggest thing that feeds into the shortened attention span of mobile gamers? The 25 artifacts. By requiring the collection of this many targets, you’re pretty much guaranteeing that players will find a new one every five or ten minutes. If you want to play Traps n’ Gemstones in bite sized sessions, you’ll still feel that tickle in the reward center of your brain after every play.

Well …probably. As a Metroidvania, there’s one pitfall that Traps n’ Gemstones simply can’t avoid — some players will get to a point where they scratch their heads, with no idea of what to do next. This happened on my playthrough after finding the 20th artifact. I searched every room I’d uncovered nearly a dozen times before I figured out what I was missing. And with every new sweep, I came one step closer to just giving up and not finishing the game. 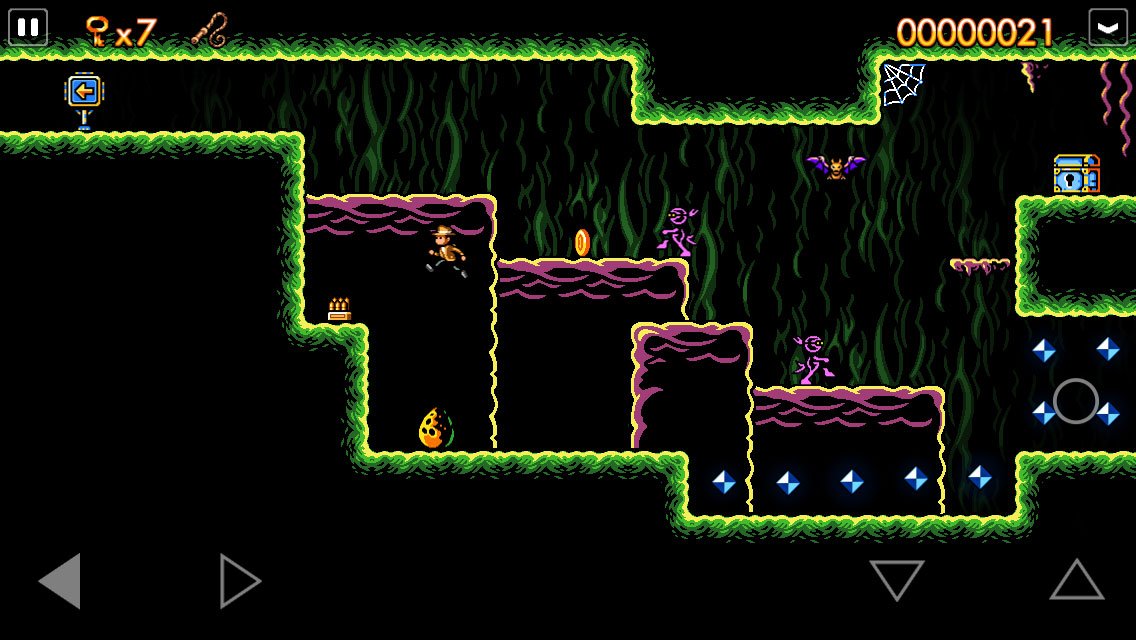 This is a bummer, but it’s also a staple of the genre. Still, I’m very glad to say that I pushed through that frustration and collected every last artifact.

Traps n’ Gemstones is more than just another great release from Donut Games — it’s essential gaming for fans of classic back-tracking platformers. I really can’t recommend this highly enough, especially to gamers who are already enamored with the genre. Hands down, this is one of the best games of 2014. Buy it.

Gods Will Be Watching Review – God Help You