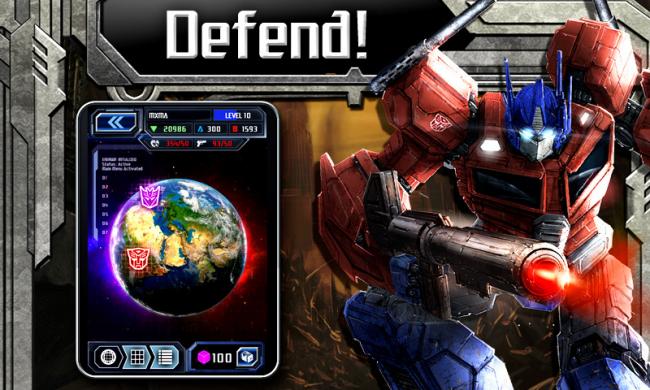 This will probably come as no surprise to anyone familiar with the collectible card battle game genre, but Transformers Legends brings almost nothing new to the table and is for all intents and purposes just a re-skinned version of Marvel: War of Heroes. But Marvel: War of Heroes is a very good game, so you can hardly blame Mobage for not wanting to reinvent the wheel.

After a brief-but-impressive animated opening, you’ll be prompted to choose your side, Autobot or Decepticon, and an initial leader – in the case of the Decepticons, either Skywarp, Thundercracker or Ravage. It doesn’t really matter much which faction you throw in with, though, because each has its own campaign and you can play through both simultaneously, alternating between missions for each team as you go. Once that’s taken care of, yet another Transformer will lead you through a brief tutorial mission that introduces the basics of the game, and then it’s off to battle for the fate of Earth!

You’ll begin the game proper with a small squad of low-end Transformers and options to conduct missions, upgrade your forces and engage in player-vs-player battles. Aside from the inevitable changes in terminology and other such details, it’s almost exactly the same as most other CCGs, although it does make an effort to insert a little more “game” into the mix by regularly confronting you with an enemy Transformer who fires missiles that must be “shot down” by tapping on them when they come into range. The faster you can bring them down, the more bonus credits you’ll earn, and while it’s very simplistic in terms of actual gameplay, it does help to keep things interesting.

You will also occasionally be given the opportunity to engage in PvP “ambushes” while in the midst of missions that allow you to partake in a head-to-head battle without expending a “Battle Cube” (more on those later) and “Boss Interceptions” against more advanced and powerful computer-controlled opponents. Much like the enemy attacks, it’s not terribly sophisticated but it’s a nice way to break up the action.

Another interesting feature is the way that each Transformer has a robot mode and “alt” mode, cards for which must be collected separately and can then be “Trans-scanned” into a single, more powerful card. Cards may be upgraded in a more conventional fashion by combining them with others and there are also weapon cards, some generic and some unique to specific characters, which can be given to your team and squad members to provide them with a little extra oomph in battle.

Multiplayer battles are exciting, high-intensity affairs, with melee attacks and exchanges of gunfire flashing back and forth across the screen, but it’s a bit tricky to tell what exactly is going on, at least as a newbie. It’s kind of like the Transformers movie that way – full of sound, fury and giant robots, but a tad confusing unless you really take the time to dig into the details. The good news is that, also like the movie, you don’t have to know what’s going on to have a good time. There are plenty of details for serious CCG lovers to obsess over but the game will automatically configure optimal squads for battles, meaning that all you really need to do is collect, upgrade and “Trans-scan” cards.

And if you’re a Transformers fan, that’s where the real fun lies anyway. Thanks to the promise of “hundreds” of cards to collect, Transformers Legends features Autobots and Decepticons both popular and obscure, rated in four levels of rarity from “common” to “super-rare.” From Optimus Prime and Megatron to Jetfire and Skyfire (that’s a little Transformers joke), the gang seems to be all here and they look absolutely fantastic, with art that makes the old cartoon series and comics (and, in my opinion, the recent movie franchise) look absolutely sick by comparison.

But the opposite side of that coin is that if you’re not a Transformers fan, there’s not a whole lot about Legends that makes it stand out from other such games. Once you’ve made your way to around level 10, the action is slowed down dramatically by the increasing consumption rate of both Energon, required for missions, and PvP Battle Cubes. You can purchase more at a rate of 100 Mobacoins (99 cents) per single Energon or Battle Cube recharge but given how quickly they’re consumed – a full Battle Cube recharge is good for three PvP fights – it’s an expensive proposition, compounded by the fact that as far as I can tell, there’s no way to increase your Energon or Battle Cube capacity as you level up. They’ll recharge on their own, of course, but very slowly: My first full expenditure of Cubes took two hours and 44 minutes to fully replenish. I understand that Mobage has to make money and it may just be my imagination, but Transformers Legends feels like it’s putting more of a squeeze on players than the studio’s previous CCGs. 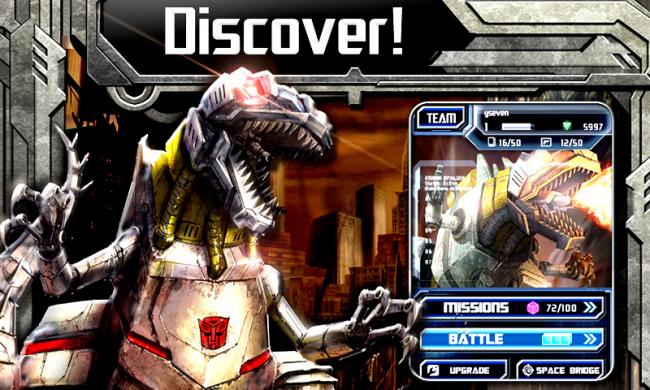 There are one or two other odd shortcomings as well, most obviously the inability to index or even search the “Cyberdex,” a list of all the Transformers you’ve discovered over the course of the game. Want to take a long, lingering look at Ratbat’s card? You’ll have to skip through 35 pages of small images, and if you happen to miss it, back you go to look again. Call me a nerd if you will (and it’s pretty obvious that I am) but I expected a lot more fanboy fun out of this game than it ultimately delivered.

Transformers Legends is a good game, but it fails to impress quite as powerfully as it might because it slavishly adheres to the cookie-cutter CCG formula without adding anything of note for die-hard Transformers fans. If you happen to love both then you’re probably going to love this, but if you’re looking for a fresh take on collectible card battle games or just a new way to indulge your deep-seated obsession with the gang from Cybertron, you might find it a bit of a letdown.