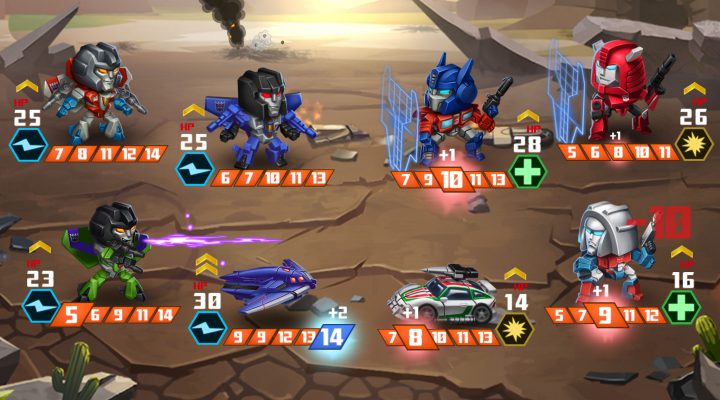 Tactical battles are entertaining combos of skill and luck.

Tons of Transformers, rendered in an eye-catching art style.

Live multiplayer, at least some of the time.

Could use a story, more events or something else to tie the battles together.

Contrary to what our headline might lead you to believe, Brawn is one of the bots who didn’t make the launch roster for Transformers: Battle Tactics — but plenty of other Autobots and Decepticons did. With a unique super deformed (or chibi) art style as its calling card, this mobile tactics game has a simple set-up but offers plenty of ways to utilize strategy (and yes, luck) to form the best team of Robots in Disguise you possibly can.

The chassis on which Transformers: Battle Tactics is constructed is turn-based combat between teams of four Transformers. DeNA is explicitly linking the game to the multimedia Combiner Wars storyline that is running throughout the IP, but fans of the franchise are guaranteed to find some of their favorites among the 77 characters spread across four rarity tiers at launch. 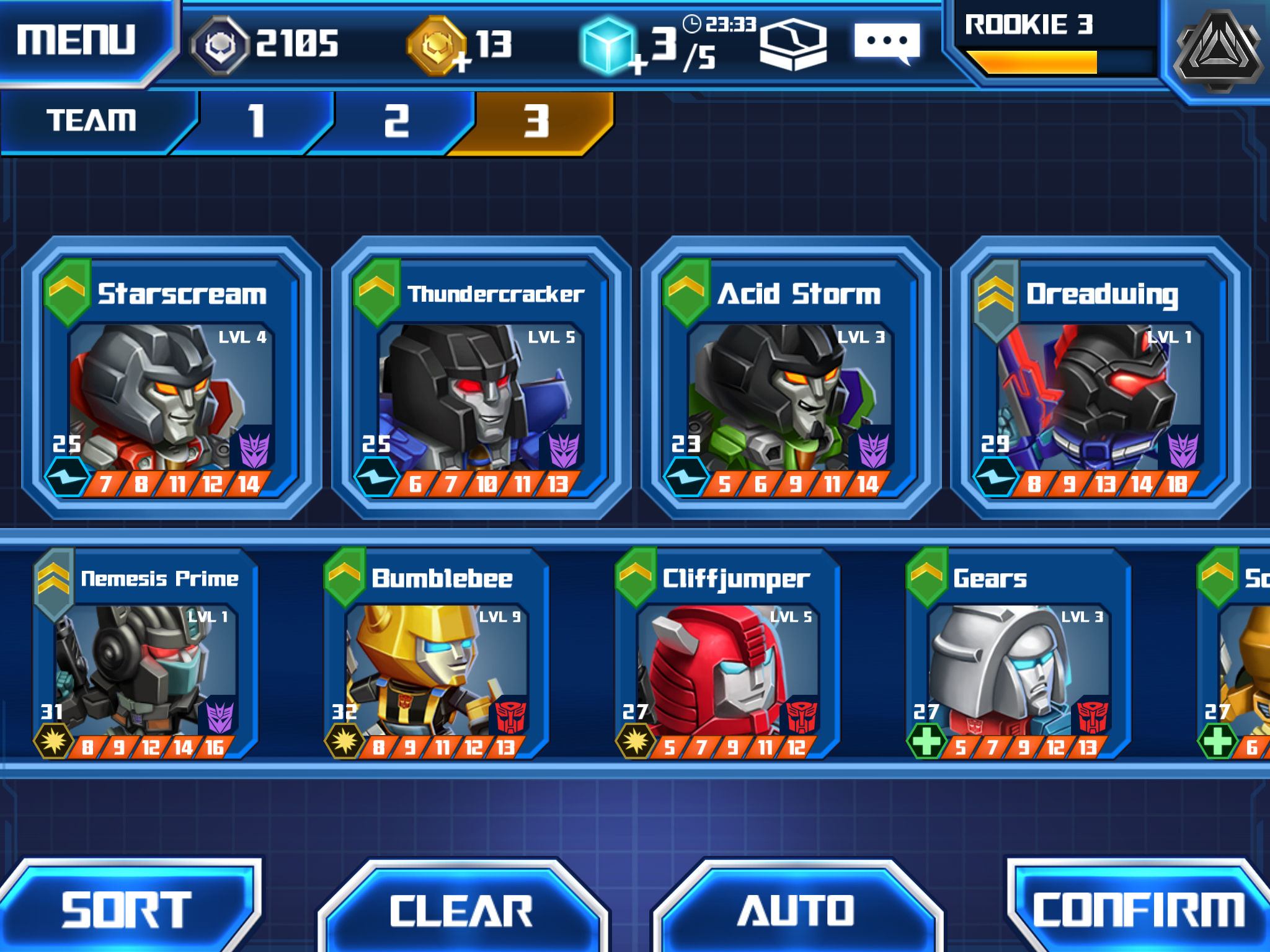 Any four bots can be combined in a team, meaning Autobots and Decepticons can work together (grudgingly, I’m sure) if you so choose. But the strategy really begins here, as placing four characters from the same faction together grants a passive bonus, and specific lineups of bots can do the same thing. Each character has a combat dial of sorts, similar to what you’d see in HeroClix or other miniatures games. The values for each of the five steps on the dial are different in robot mode and in each character’s one or more alternate modes, which is an important element in battle.

That’s because combat introduces chance into the gameplay, with each character or both teams “rolling” one of the five spots on its dial randomly at the beginning of each turn. The resulting number shows how much damage the character does during its attack, but the cool part is that you can transform between forms for free at any time before you finalize your team’s actions. There’s often a risk/reward decision to make; Optimus Prime has generally higher damage values at each step in truck form, for example, but leaving him as a robot buffs all of his teammates’ attacks by one point each. 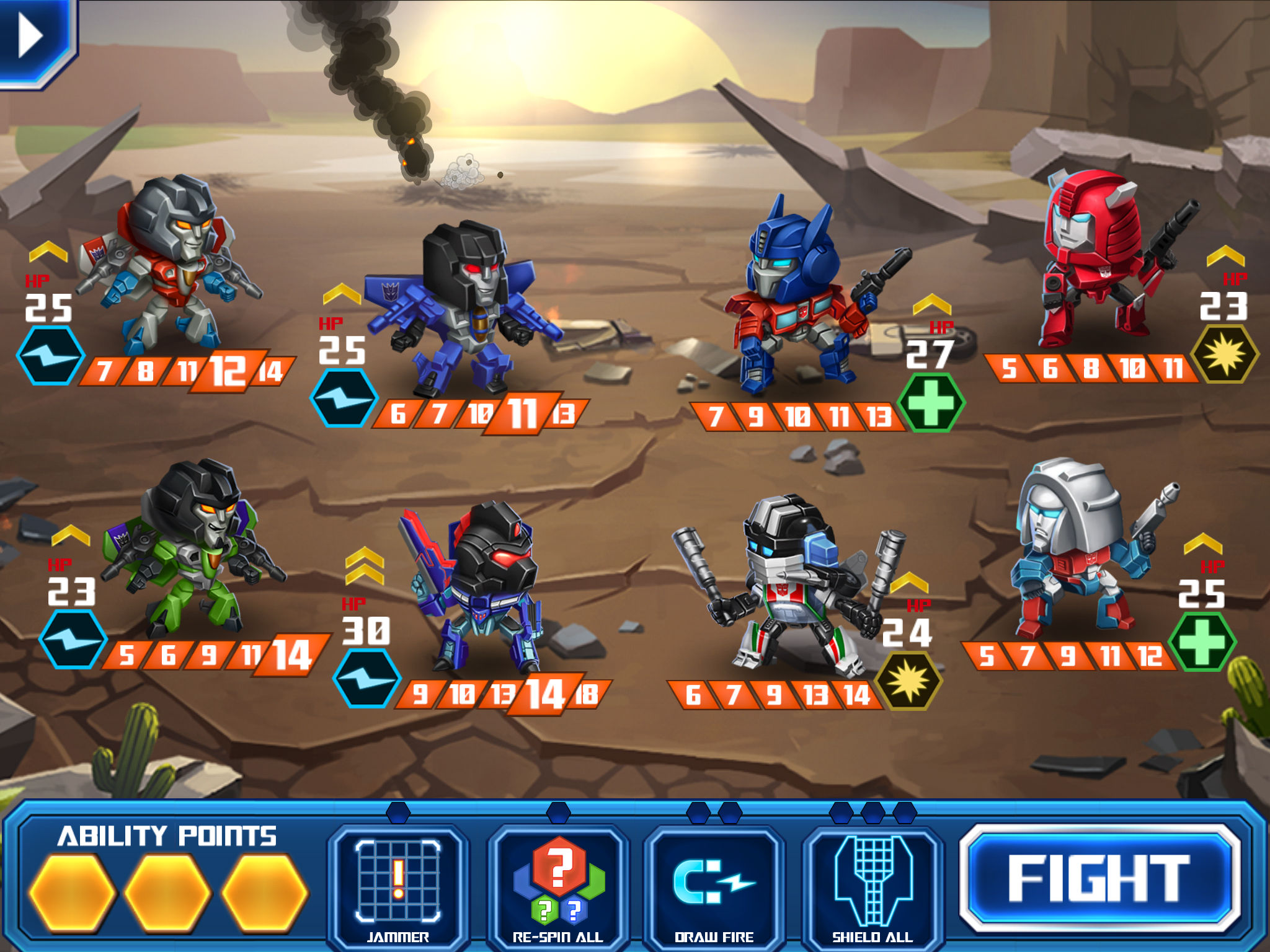 Special abilities are occasionally found at the end of a character’s dial in one mode, which suggest play-style strategies right away. The Decepticon jets (Starscream, Thundercracker, etc.) all have one spot of “first attack” at the end of their airplane mode dials, automatically winning their team first attack, which otherwise is up to a coin flip.

To top it all off, you get three points to spend on team abilities each turn, which can really swing the battle in your favor if chosen at just the right time. DeNA even managed to work the luck element into the gameplay here, as some abilities allow you to re-roll one or more characters’ values before you confirm your team’s actions. As a result, there’s very rarely a turn until maybe the final one in each battle where you don’t have multiple decisions to make. Between evenly matched teams, skillful play is important, and even when you are slightly overmatched, you can still pull off an upset if you make smart choices and the rolls break your way. 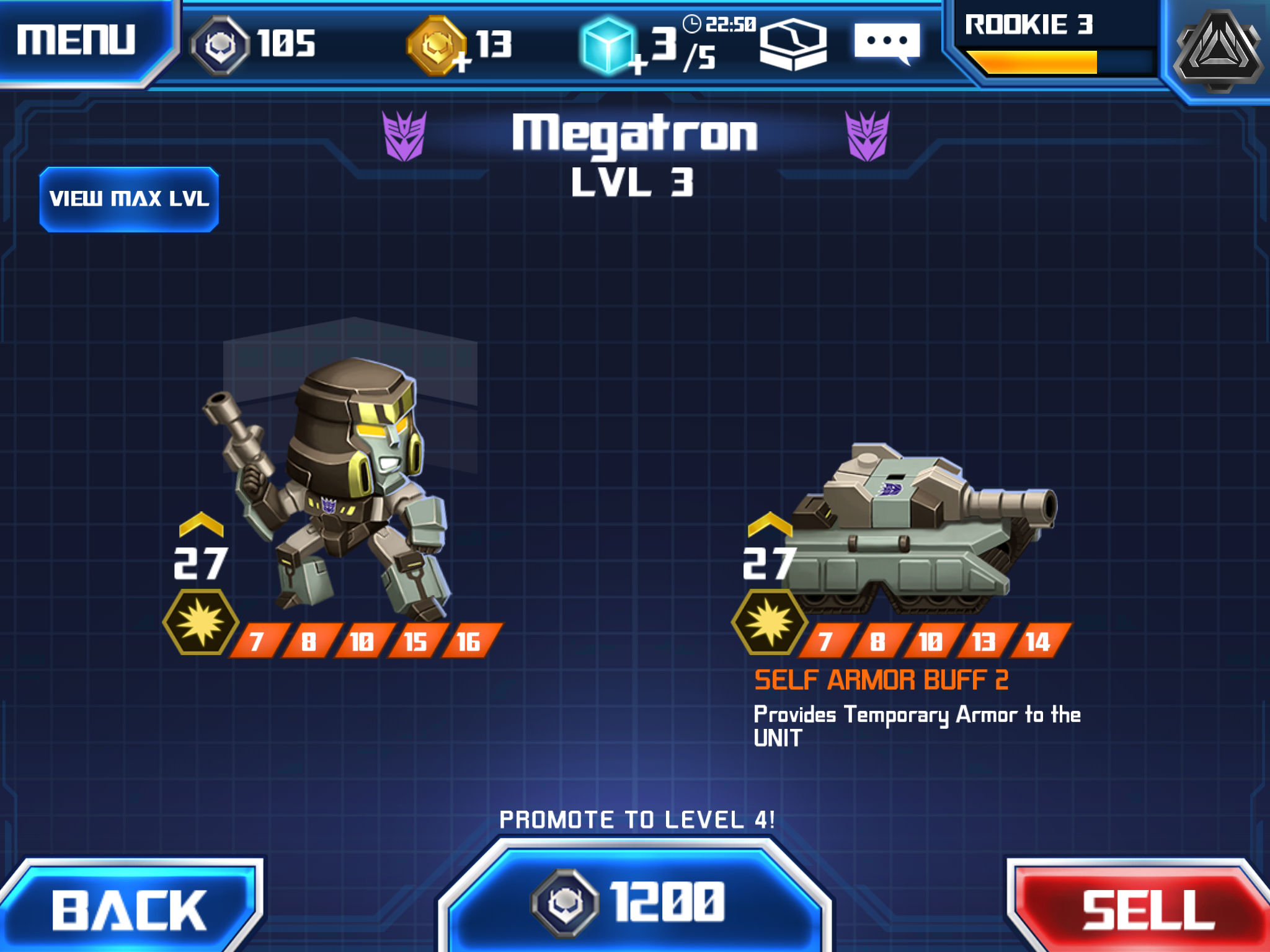 You’ll get a chance to test what you learn against both live human opponents and AI teams, though the matchmaking system can be a bit wonky for PvP. On the plus side, when you get matched up against a really superior foe, your PvP ranking takes either a small ding or none at all if you lose, and even knocking out one or two enemy bots can win you valuable resources to level up existing characters or unlock new ones. And while you can always pick your opponent for a single-player scrap, choosing a PvP battle will sometimes dump you into single-player anyway, presumably because the game couldn’t find a proper match for you.

The Space Bridge monetization system should be familiar to anyone who’s played Transformers Legends, and while it’s more forgiving than in that game, it’s a bit pricey. But if you’re willing to grind things out, there doesn’t appear to be anything that can’t be earned through regular play. An energy system limits play to just five battles per session, though refills cost only a few pieces of premium currency, which can also be earned in battle or through the resource drops.

Transformers: Battle Tactics feels like it still needs events, which are undoubtedly in the works, and a story, which may or may not be forthcoming. Even so, there’s a really nice framework in place to ensure mobile gamers, especially those who count themselves as Transformers nuts, have something to enjoy for months or even years to come.