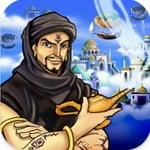 The course of history is often determined by trade. Shrewd business sense and quality trade routes can grow an empire, bankrupt potential enemies, and sometimes lead to war. Sandlot Games’ Tradewinds Legends, originally released for PCs, does a remarkable job of showing how powerful a tool trade can be. The game’s port to the iPhone/iPod Touch manages to convey this concept well, but a few shortcomings in the execution keep it from being a truly great portable experience.

The main story mode has you choose from one of four playable characters, or you can create your own. Each character has a specific storyline to pursue: there’s a widow who has to pay off her dead husband’s debts, a morally-flexible merchant looking to make it as big as possible, an ancient captain who wears mystery like a cloak, and a desert warrior searching for his missing brother. They’re all interesting plots, and each character has their own unique attributes that will affect gameplay.

Once you’ve selected whom you want to manage your trade empire, the game begins. The game starts off in one of a few fictional ports between the Mediterranean Sea and the Indian Ocean, with more and more opening up as time goes on. Eventually, some inland ports become available, though you can only reach those if you have an entire fleet composed of flying ships.

While the game starts out seeming like a historical trading sim, it quickly incorporates fantasy elements like the aforementioned flying vessels, genies, and phoenixes (to name only a few). As opposed to some games, Tradewinds Legends mixes things pretty flawlessly, given the Medieval setting that spans a couple of continents.

That’s the beauty of this game: it mixes in so many things and manages to do it so very well. Because of this, it seems unlikely that anyone will play exactly the same way. If you want, you can adopt a military strategy and just roam the waterways looking for random pirate encounters; these tend to have massive cash/treasure rewards, but are risky since you can lose your entire fleet if you run into overwhelming odds. Or you can trade to your heart’s content by buying items for a low price in one city and then selling them for much higher amounts in another. Or, finally, you can simply pursue the main story quests and receive varying rewards while furthering your character’s plotline. The gameplay is about as deep as you’ll let it be, but it’s never not enjoyable.

The game’s got some strong production values, too. Character portraits are cartoony and often a bit whimsical, and the game itself consists of sprites that move around on lovely painted backgrounds. It’s not amazing, but the visual content is strong and the look fits the theme of the game nicely.

The audio, too, is solid. The music is well-composed but unobtrusive, and the sound effects of ships sailing in port, people talking in the background, and explosions during combat all add to the overall experience.

Aside from the story mode, there are two other game types available: free trade and multiplayer. The free trade mode eschews the story entirely, allowing players to start engage in lots of trading and combat from the getgo. Multiplayer, meanwhile, needs a Bluetooth connection between devices to play; since no other iPhones nearby had this game on hand, it was impossible to test this mode out.

The problem is that this doesn’t feel like a game that’s right for the iPhone/iPod Touch format. Yes, it looks great on the small screen and has some very deep gameplay, but the system isn’t an ideal fit. Selecting buildings on the screen is often awkward, because they’re grouped so close together, and you’ll often end up selecting the wrong area to visit in a port. This is also problematic when you try to buy items in different stores, since fields are lumped so closely together that you’ll often select the wrong thing to buy and then have to backtrack to the previous menu.

Also, the text displaying character dialogue and various instructions is rather difficult to read at this resolution. The other failing of putting a game like this on the iPhone is that it’s a bit unstable. On a new iPhone 3G, the game would randomly crash from time to time, or simply fail to load.. Needless to say, all of these issues detracted from the overall experience.

However, the game is much better on the iPad, especially when it’s enlarged to twice its original resolution. Suddenly it’s much easier to select port buildings and read the text; it should also be noted that when playing the game on the iPad, Tradewinds Legends never crashed or failed to load.

As a game for the iPad, Tradewinds Legends is an excellent fit (and deserving of a score of 4/5). It’s a great game that is deep, addictive, and fun, not to mention somewhat addictive. The only real improvement that it could use is some better graphics to take advantage of the larger display. If, however, you only have an iPhone or iPod Touch, you’ll need some patience to enjoy playing this title.