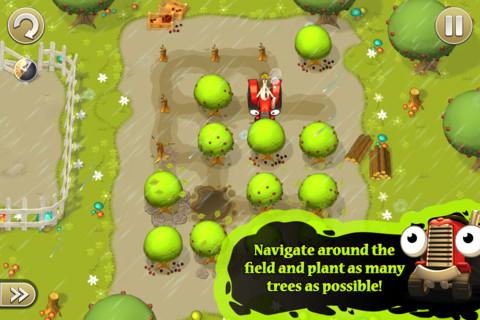 The farm isn’t exactly seen as the toughest atmosphere in the social gaming realm. In fact, farms aren’t really seen as anything but simulation games. So, when we found that Origin8’s Tractor Trails was one of the deepest and most difficult puzzle games on the App Store, we were very pleasantly surprised.

You play as a crafty hen, capable of maneuvering Red the tractor—a friendly-faced farming machine that is able to plow land at light speed. In this quirky puzzle title, it’s up to your dynamic duo to maintain over 100 plots of land as diligently as possible.

By clicking and dragging on Red, you’re able to plot out a linear course. Red drives until he hits a wall or tree, and the hen will plant trees that grow behind you as you drive. As any farmer would tell you, planting trees without wasting any soil is of utmost importance. In layman’s terms, your goal is to complete a maze without ever retracing your old path.

Each stage is completed when one of three things happens: you hit a dead end, you complete the stage 100%, or your tractor crashes into one of many obstacles in the later game. While hitting that second option is your main goal, it isn’t always mandatory in order to progress through the stages.

Almost every stage can be completed without planting trees over the complete path, but it’s in your best interest to do so. Each stage offers three gold stars: one for running into a gopher planted in each level, one for planting trees on 100% of the field, and a third for completing the stage 100% in a designated amount of time. As you accumulate stars, you’ll unlock more and more of the game’s 130 unique courses.

The maze mechanic might seem simple, but farming in Tractor Trails is a lot harder than it looks! Each of the game’s 4 additional areas brings a unique mechanic or two to the table, including sliding rafts, un-plowable soil, sticky mud, and mine carts, to name a few. The constantly changing mechanics keep each puzzle both fresh and challenging.

Luckily, you have a few tools at your disposal in the game’s shop. Here, you can exchange corn you’ve accumulated from levels for different permanent and temporary tools. Most permanent items increase the speed of your vehicle, either through physically boosting your tractor’s movement time, or by allowing you to queue multiple moves at once. Single-use items range from an undo button to a guide that reveals your first few optimal movements.

The only gripe we have with the way that the shop mechanic is how it can be necessary to recover the third star for some stages later in the game. You can collect the first two stars (golpher and 100%) with careful planning, but some stages require you to obtain a time limit that is impossible to reach without increasing the speed of your tractor in the shop first. 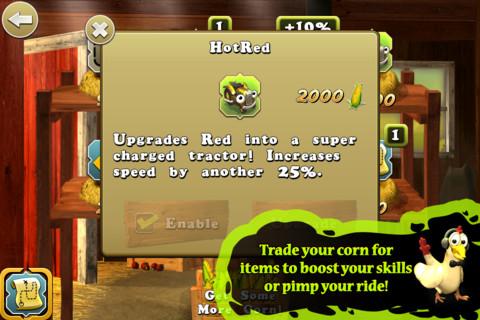 It won’t ruin your time in Tractor Trails, but it can definitely prove to be an inconvenience. Repeating already completed stages in order to retrieve the third star can be a hassle, especially when all you want to do is collect stars in order to play more stages. Of course, you can always purchase additional corn or outright unlock all stages with a single microtransaction, but it shouldn’t ever feel like a required option in a game that requires an upfront cost in the first place.

Speed issues aside, there really isn’t anything else to knock Tractor Trails for. It’s an addicting, colorful, and thought-provoking puzzle game that doesn’t really have an equivalent. With hundreds of stages and plenty of massive stages in the later levels, this puzzle game takes the farm setting deeper than it has ever plowed before.