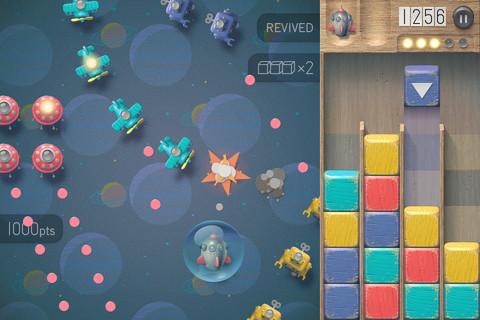 Whether in Triple Town, 10000000, or Puzzle Forge, the match-3 game has been put through its paces lately in mashups with other genres. With Toybox, developer Barrel of Donkeys tries to take things a step further, delivering two styles of play at once. And like the made-up, hybrid games of an imaginative child, the result is at once lovely and inconsistent.

Toybox describes itself as equivalent of patting your head and rubbing your stomach at once, and I couldn’t have said it better myself. Instead of matching to create things, or powering another game by lining up blocks, you use your thumbs to juggle a basic match-3 title and a retro-inspired space shooter side by side. Each in turn affects the other, with blasted ships translating to falling blocks, and cleared rows and columns ridding the screen of enemy spacecrafts.

Almost immediately, Toybox won me over with its aesthetic. Ornate-by-design, every aspect of the game feels pulled from a collective childhood we’ve all experienced. The “play” buttons are pulled directly from an arcade machine, and to start, you have to tap two of them at once. The match-3 experience is rendered as a set of vibrant, well-worn wooden blocks. And the space shooter takes place against a childhood wallpaper come to life, like a claymation scene from a space-lover’s mind played out on his roof before bedtime.

Every good bedtime story needs a lullaby of course, and Toybox‘s unstoppable reign of adorableness most definitely extends to the music as well. The xylophone-driven soundtrack is lilting and serene, with generative notes powered by the destruction of incoming enemies and clearing of blocks. Arguably a simple flourish, but a great example of toying with player agency, and a reminder that – ultimately – games are toys (and that’s a good thing!).

Belying the game’s childlike sense of wonder, however, are a few niggling gameplay and design issues. On one hand, there is a great sense of satisfaction in learning to master the two boiled down mini-games and play them both at once. Toybox certainly doesn’t treat you like a child, testing your reflexes and decision making in tandem. Learning when to pull the trigger on a possible match and when to stay and fight it out in the space shooter so you can bank a near-match for later gives the experience a great strategic rhythm. Meanwhile, the contradictory play styles cleverly up give each game a little bit of what it would normally be missing.

With that said, the obvious compromises necessary to pull off an audacious idea like this gradually begin to take their toll. With only four available rows of five blocks, there is a very limited set of strategies available to you as a match-3 player, meaning that you’re often left to take blocks as they come and make matches right away. This leads to an uneven experience of useless matches, or matches that come just shy of a massive incoming wave where they would have been needed most. Meanwhile, the advertised prospect of making two matches at once to recover a life is more truthfully a fluke than it is a display of skill, making thrilling near-death comebacks highly unlikely.

On the game’s iTunes page, Barrel of Donkeys make it clear that Toybox shouldn’t be played on the iPad due to necessary use of your thumbs deftly and dextrously. In fact though, it’s simply the case that the “dual thumb, alternating action” control scheme isn’t all that conducive to mastering a learning curve. At some small level, I always felt like part of my brain was dedicated to keeping my actions straight and making sure I wasn’t pulling my ship off course, or misplacing a block. The result is an overall lack of nuance; it’s hard to master strategies when playing the game itself feels like something to master.

By deciding to deliver one stage and configuration of enemies per week as well, Barrel of Donkeys reduces a significant amount of the game’s long-term playability. I can’t see what would have been lost at the level of excitement or competition by allowing players to use previous configurations as free-play “training zones,” while tabulating scores of the current “competition level” for the chance at “top player” glory. It’s a shame to think that if I don’t jive well with a certain level, or feel unfairly bogged down by the pattern of ships, I simply can’t play Toybox for a week.

Yet for everything preventing the game from claiming technical perfection or proving as fun as perhaps I would like, there is a wonderful sense of charm and earnestness there to soften the blow. If you’re looking for another addition to Triple Town school of match-3 innovators, you may find this falls a little short. For anyone curious about playing something genuinely new and offbeat, however? Toybox is a lovingly crafted flight of fancy with its heart in the right place.