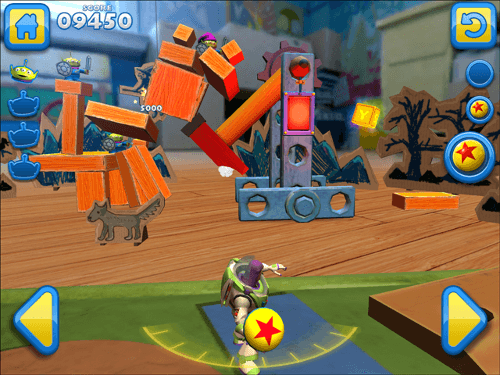 Playtime is serious business in Toy Story: Smash It!

When evil threatens the innocent, Buzz Lightyear is bound by honor and Star Command to quell the danger. Bonus points if he destroys as much property as possible while restoring the peace. Toy Story: Smash It is a 3D physics game in the style of Boom Blox that has lots of the things kids love best: The cast of the Toy Story movie, great visuals, and an excuse to fling stuff at block towers.

Toy Story: Smash It captures the heroes of Toy Story in a rare moment: Playtime. There are no grabby collectors to deal with, no stuffed bears with totalitarian ideals, and even difficult questions about growing up and away from the things we love are left by the roadside. Instead, Buzz Lightyear and his pals find themselves engaged in conflicts that are purely make-believe.

Each “Episode” of Toy Story: Smash It contains a collection of levels wrapped within a theme. The object of each level is to knock down all of the squeaky three-eyed aliens, who are posing as villains. Don’t worry; they’re totally into it, and they don’t get hurt when they fall. They just run away.

Buzz is allotted a set number of projectiles at the start of each level. If he fails to knock everyone over before he runs out, he needs to start the level again. His basic weapon is a regular ball, but before long, Star Command sees fit to distribute more potent weapons, including a rocket that bores through tough foundations and a balloon that can spontaneously inflate and burst a tower open from the inside.

Unlike, say, Angry Birds, Buzz can’t win by simply lobbing a projectile at an alien, since each one is equipped with a shield that deflects fire. Instead, Buzz needs to scout each level (he’s given a limited amount of movement, which lets him view towers from different angles), analyze the structures’ foundations, then let ‘er rip.

Toy Story: Smash It successfully captures the spirit of the franchise. Each Episode utilizes tricks, traps, and structures related to its theme, like toy trains in the “Most Wanted” Western-style playset. It feels like Andy is behind the toys, busting the bad guys and having a great time.

Despite its seemingly childish setting, Toy Story: Smash It is a challenging game for puzzle fans of all ages. In fact, very young players might find it a little frustrating. Access to new episodes is locked away behind stars, and gathering stars requires a stellar performance on each level. You need to knock down the aliens, collect the gold point blocks, and do it all while expending as few projectiles as possible. If you fail to three-star a level, Rex the dinosaur will try and help you out by pointing out what you did wrong. It is, frankly, a little annoying. Hey Rexy, why don’t you throw the ball with your tiny little baby arms? Yeah, that’s right, walk away.

Even though Toy Story: Smash Itmight look a little familiar to Boom Blox fans, it’s still a solid, addictive puzzle game. Experienced players should play alongside youngsters in order to show them the ropes, however. Think of it as mentoring the next generation of Space Rangers.