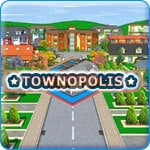 Construction simulations are all the rage lately, helping to prove that literally every genre – real-time strategy included – can benefit from a casual-minded extreme makeover. Townopolis certainly swears by this theory, reducing the core number of resources you must manage to just two (materials and workers). Unfortunately for aspiring foremen though, a weak presentation and tons of inherent drudgery serve to undermine what could otherwise be considered a strong foundation on which to build.

On this topographical map, which displays a snapshot of local forests, fields, streets and homes from an angled, overhead view, a series of structures and terrains await. Using your mouse, and the Spartan, if easily navigated user front-end, you’ll click on this workmanlike backdrop to build houses, clear out rubble, erect supermarkets and place the odd post office or park. The core goal: Turn dwindling settlements (all of sadly limited scope) into thriving settlements.

Up to three objectives – build a certain number of apartment blocks, reach a specific happiness level, attract a set amount of citizens – are assigned in each of the campaign’s two dozen featured scenarios. Predictably, achieving them requires thinking several steps ahead, assembling and laying out income-generating dwellings (small homes, large homes, apartments, etc.) and commercial structures in highly specific ways.

The biggest challenge basically being managing a limited cash flow – rental properties generate a set amount of loot each time a slowly filling income meter replenishes – and keeping morale-crippling commercial structures away from residential zones while finding ways to meet objectives without breaking the bank, or running out of limited resources like building supplies and land.

Props are awarded for approachability: It’s easy to jump right in and understand the simple socioeconomic systems that are highlighted. As such, within minutes, even newcomers should feel right at home throwing up buildings, assigning security upgrades and taking pains to group houses so as to create spirit-boosting camaraderie. Likewise, the ever-present option to restart scenarios helps when you’ve failed to meet your task of attracting 40 residents or stacking enough resources to repair vital income-generating structures, which break down randomly as the proceedings unfold.

Still, as much as multiple workers can effortlessly be assigned to one job to speed up build times or restaurants quickly erected where underperforming shacks once stood, there’s a single major point of failure that drags the entire experience down. Specifically, the fact that on-screen excitement involves a ridiculous amount of idly sitting around on your keister, and serious lack of compelling visual content to keep you preoccupied in the interim.

It’s even more unforgivable when you consider that the title’s essentially a clone of category leader Build-a-lot, which shipped months earlier, yet does literally every highlighted feature one better. As such, despite handling reasonably well, the title feels more like an uninspired knock-off than spirited homage, a problem which could’ve been avoided as easily as by just investing more in giving the game a sense of personality or humor.

Alas, it’s not to be. Drawing unavoidable parallels to recent genre contemporary Carnival Mania, there’s a surprising amount of downtime involved, with slowly-moving progress meters driving nearly every activity. You’ll wait for income to arrive; wait for houses to go up; wait for material shipments to show; wait for repairs to finish; wait for debris to disappear; wait to have enough cash to buy the blueprints and licenses needed to advance; wait for upgrades to take hold; and wait some more.

The key difference here being that, in lieu of painful difficulty spikes (a common category mistake), the designers instead draw scenarios out by giving lengthy goals as filler. When earning a gold star on your first scenario without handholding requires finishing in less than 10 minutes, it’s never a good sign. Worse, there’s precious little in the way of sharp visuals, catchy sound effects or much of anything animation-wise, really, to help pass the time.

A clever sandbox mode, which lets you assemble your own scenarios and goals, does help the game recover a little lost ground, as does its overall depth and forgiving nature. But however you choose to tackle the title, it’s hardly what we’d call much fun just sitting around waiting to see if strategies have proven effective with no major payout graphical or otherwise, apart from a few odd trophies, to reward you for all the time and trouble. Pity.