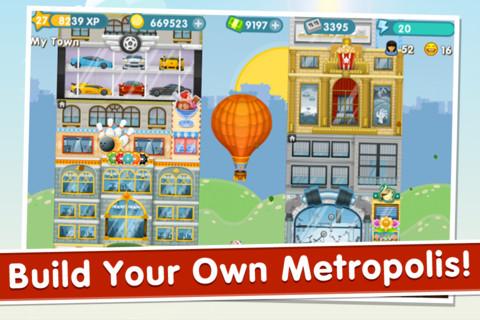 Tower Town is a little like Tiny Tower, but with a town full of towers!

In Tower Town, you are tasked with building a successful tower with either residential or commercial properties. You have the opportunity to build several different types of residences, from studio apartments to penthouse suites, and commercial properties, from flower shops to movie theatres. Variety is key in these types of games, and Tower Town definitely nails that aspect.

Building your tower is as simple as tapping where you want to place the next property, and then selecting which property you’d like to place there. You do need special supplies to build certain properties such as wood and bricks, which are collected by using energy and chopping wood or mining concrete with a simple tap of your finger.

Unlike other tower building games like Tiny Tower, Tower Town doesn’t have you micro-manage each property as much. Properties just need to be collected from once in a while in order to keep generating more cash for you. Do I prefer this method over Tiny Tower? Yes, and no. Both games do a good job at requiring you to keep an eye on your properties but Tower Town is probably better for a more passive social gamer such as myself.

Eventually your tower will fill up with properties, which then requires you to build additional towers. This is a neat feature not incorporated in other tower building games, because you can make each tower have its own theme. You could have a tower dedicated to food stands, one for just residences etc. In Tiny Tower, for instance, you only have one tower to manage and it can get really messy and tiring once you’ve reached upwards of 100 floors. Tower Town alleviates this problem, requiring just a simple swipe to the left or right to manage each one of your towers.

Another aspect that Tower Town knocks out of the park is its visuals. The characters and buildings are cute, and they really stand out when compared to the pixely charms of the game’s aforementioned tower building competition. 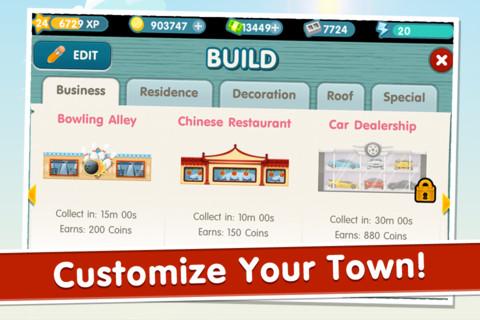 When it comes to social features, Tower Town tries something different in that you must ‘bump’ iPhones with a friend to share gifts with one another. While it is a unique concept I have not seen before in social games, I don’t see it taking off. Not only do you have to know someone else who plays Tower Town, you have to be right next to them to exchange gifts. Simple integration with Facebook or Game Center would have sufficed, but I can’t blame the developers for trying something different.

Besides the social aspect being awkward, there really isn’t much you could say is ‘bad’ about Tower Town except for the originality of it. Ever since Tiny Tower became a big hit on the App Store, it became inevitable there would be copies. Fortunately, Tower Town is a great clone that is in some ways better than the original.