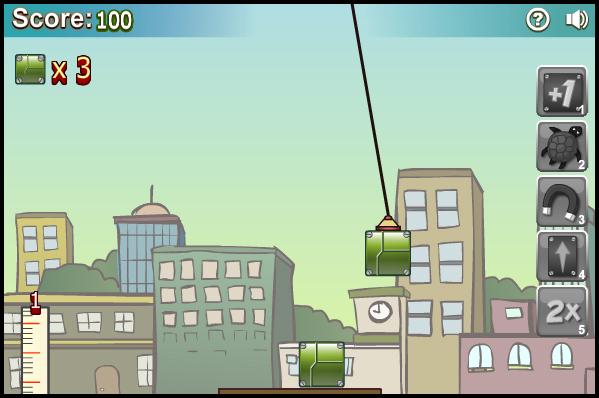 The arcade-style game developer Mindjolt is adding another simplistic casual game to its social collective on Facebook. The name of the app is Tower Stack and it’s a concept many will be familiar with as it plays virtually identically to Tower Bloxx from Digital Chocolate. A high score-oriented title, it challenges you to a game of timing and very basic physics to build a structure as high as possible.

The concept of Tower Stack is simple: Build a tower as high as you can. The catch is that the construction isn’t exactly to code and sections of the tower are built by dropping them from an infinitely tall crane. The challenge comes predominantly from timing, as the crane swings back and forth, thus the idea is to release the tower section it holds — with a simple click — when it right above the tower section below it.

For each successful drop (meaning that the block doesn’t miss), points are earned. Should you manage to land a section directly atop the center of the previous one, double points will be earned. After a successful drop like this, each subsequent one will earn the previous point value plus 50.

Of course, the challenge gets a bit greater as you progress into the upper atmosphere. The taller the tower becomes, the more it begins to sway. Between the moving crane and tower, it can actually be quite difficult. Moreover, once you have missed three blocks, it is game over. Thankfully there’s a bit of help to be had in regards to this challenge, and that is through purchasable power-ups.

These can be bought for a virtual currency that’s spendable in any MindJolt game, MindJolt Tokens, before starting a game session. Options consist of Extra Block, Slowdown, Magnetic Blocks, Taller Blocks, and 2x Bonus. Most are fairly self explanatory, but respectively they grant an extra chance to miss, a slower swinging crane, blocks that connect more easily (it gives you a greater margin for error when it comes to timing), larger blocks to stack much higher, more quickly, and doubling your score for one minute. As for the Tokens themselves, these can be purchased using Facebook Credits, and appear to be earnable through a feature called “$pin To Win” in other MindJolt games. Sadly, this is not available in Tower Stack.

On the downside of things, this simple game is far from original and has been done several times before in the past. The previously noted Tower Bloxx is just one of the more prominent examples. Aside from this, Tower Stack is extremely spammy when it comes to publishing on your Facebook Wall. Most of the time, even when granted publishing permission, social games still prompt you to post a high score or achievement. Tower Stack did not, posting a high score every time a game finished. Since each play session is only a few minutes long (if that), our Facebook profile was absolutely littered with posts that needed to be deleted. 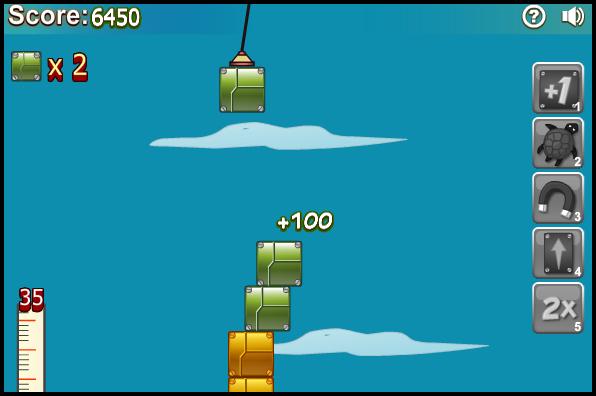 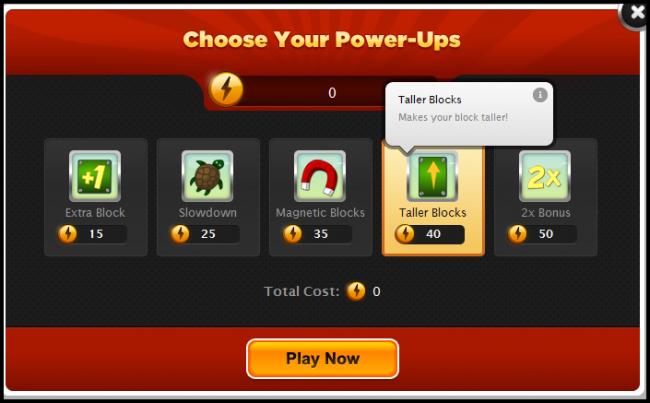 It is understandable that developers are seeking to expand on viral growth through this method, but quite frankly, this is more obnoxious than anything else. Most of the time, for friends that do not play social games, it just turns them off to them more than entices joining.

All in all, Tower Stack is a very drab and dated game design. There is nothing special here, and it’s a game concept that was seen years ago on Facebook (not to mention the web in general). More likely than not, it is just an offering from MindJolt that adds to its overall conglomerate of interconnected casual games rather than be one that stands alone. Still, the lack of creativity and spam-filled nature of the game makes Tower Stack an app that is probably best ignored. The only exception might be if you are already an avid MindJolt user.