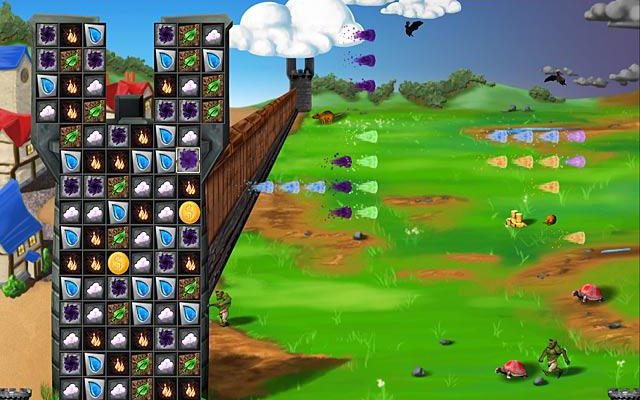 A match three game made exciting by a touch of elemental elbow grease.

Just when you think you’ve played every imaginable permutation of a match three game, along comes Tower of Elements. The creative concept from Frogdice couples a tile-swapping puzzle game with some light defense ingredients, allowing you to put your Bejeweled skills to use to defend helpless villagers from an invading army of evil.

The story behind Tower of Elements sets an epic fantasy backdrop that gives your quest a grand sense of purpose. Many years ago a group of travelers stumbled upon an ancient tower standing alone in a field. They settled in its shadow and built a village, living in harmony with the land for many generations. Then, as evil entities have a habit of doing, the Void army caught wind of the town’s existence and stretched its long arm of destruction out to interfere. King Rand wasn’t going to let his people die, so he enlisted a group of elementalists who immediately took up residence in the tower. Filling its walls with the power of air, fire, earth, water and void runes, the sorcerers used their abilities to fend off wave after wave of enemies. 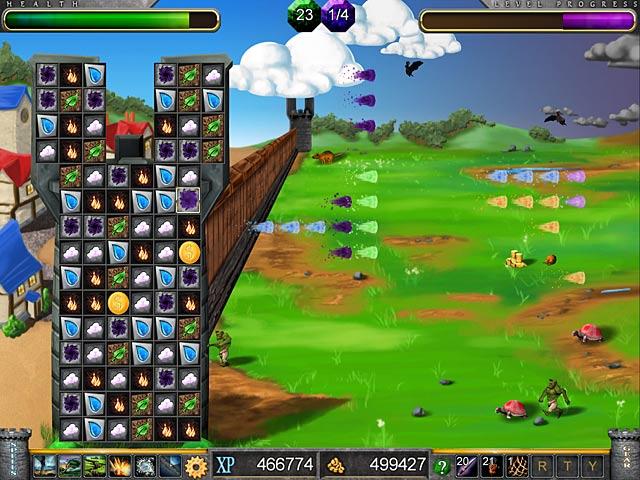 Now, ready to dispel some evil soldiers? Gameplay in Tower of Elements focuses on matching tiles in the tower on the left side of the screen. By clicking and swapping them with adjacent pieces you can form groups of three or more runes, sending a spell blast onto the battlefield that damages anything in its path. Attacks have to be on the same level as their targets, however, which adds a new layer of strategy to the whole tile swapping experience. Want to hit that rat near the bottom of the screen? Make a match at the bottom of the tower. This also gives different weight to vertical and horizontal matches, the former covering a wider area and the latter packing a stronger, more constricted punch.

After you survive the waves of orcs and tortoises, it’s off to the upgrades screen to beef up your abilities. Tower of Elements offers over a dozen new spells to buy using experience points earned through battle, or you can beef up your attacks and let the runes do the work for you. Spells destroy different groups of tiles and are best when deployed in a pinch. Gear, on the other hand, functions as limited-use items that can be purchased in exchange for gold. Gear damages enemies directly, allowing you to slice off some HP of a single foe or damage whole groups of them with one click. 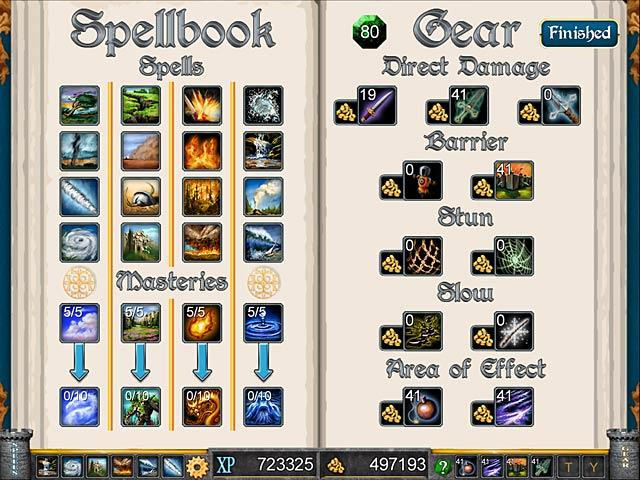 Once you get going with Tower of Elements the game will keep you occupied for a very long time. The gameplay is surprisingly nuanced and presents a stiff challenge in some of the later waves. The artwork looks a little dated, so don’t expect the rounded corners and shiny menu screens modern designers tend to favor. Some of the background tracks also seem a little out of place, but once you’re rolling with the runes and the monsters, none of these things really matter.

Tower of Elements does something risky by changing the formula of a well-established genre, but it does it with enough intelligence that it actually improves the experience. Beyond the basics of tile swapping and spell upgrading, you’ll also fill out a bestiary and play with a few bonus items for making particularly large matches. It’s a great new take on the matching game, and it will remind you why you got hooked on tile swapping in the first place!