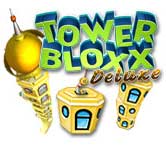 Good news for aspiring city planners: Tower Bloxx, formerly a popular mobile and Flash-based Web diversion, is now available as a standalone, downloadable PC product, and a darn fine one at that. One of the more innovative desktop concepts we’ve seen as of late, it’s a clever (and insanely attractive) marriage of arcade-style puzzle action and civil engineering sure to please fans of all ages.

Just be forewarned before starting: The going gets rough the further engrossed you become, and you’ll probably want to play in bite-sized versus marathon sessions, even as large and compelling a range of featured challenges as there is to attempt.

Plot-wise, you play an accomplished builder who must help Mayor A. Z. Milspaugh and his right-hand woman, city architect Ava Dandelion, rebuild the town of Sycamore Vale. (Or whatever else you choose to call the thriving burg: Like district titles, city names are fully player-customizable.) As the tale goes, local residences are falling into disrepair, and the only way to save them is by stacking blocks to create housing for a population whose numbers your work can directly boost.

As with the best offerings in the genre, on-screen activities prove incredibly easy to pick up and follow, yet exceedingly difficult to master. Basically, play’s divided into two distinct phases. First off being planning, in which you choose where to place blue (residential), red (commercial), green (office) and yellow (luxury) structures given grid-based metropolitan backdrops of limited size and scope. And the second, actual construction, where – using a teetering crane, which wobbles left and right in the air above building sites – you simply left-click to make the device drop the blocks it’s holding, hopefully creating a neatly-stacked series of floors in the process.

A few catches, however: For one, the piles of building blocks you create woozily also wave back and forth as well, with their center of gravity determined by how well or poorly you place each balcony or floor on top of one another. (Create a straight, well-centered structure and you needn’t worry; design something that looks like the Leaning Tower of Pisa and prepare to scramble.) What’s more, accidentally drop a block, and it may tumble aimlessly, knocking several floors off your carefully assembled building as well, with only so many misses allowed before construction’s flat-out halted.

The total size of a building further determines the number of residents it attracts upon completion, with successfully meeting minimum overall population goals awarding you new bonuses, playing pieces and access to additional areas of the city. Making perfectly placed drops – e.g. blocks centered evenly atop one another – in succession doesn’t just build a combo meter too; it also potentially increases the tenants awarded for each edifice. Cranes can also break down as well, forcing you to successfully complete bolt-adjusting mini-games, or risk dealing with wildly malfunctioning (and aim-inhibiting) pieces of equipment.

Beyond these immediate issues, it’s further necessary to think on multiple levels from a grander scale. Consider that larger buildings can only be placed next to certain preexisting structures, forcing you to always think steps ahead given limited room to build in. What’s more, it’s often necessary to demolish preexisting structures to create enough room to reach the level of urban sprawl required for forward progress. As such, you’ll often need to decide when to quickly inflate numbers by making perfect drops, or avoid wasting time knowing you’ll eventually end up having to write-off certain structures’ inhabitants later on down the road anyhow.

Still, given Tower Bloxx‘s constant feature introductions, stunning presentation (try right-clicking to pan around colorful stages strewn with flapping birds, hot air balloons and popping fireworks) and overall level of polish though, most won’t mind. Albeit difficult in later stages and a bit monotonous if attempted in anything larger than coffee break-sized sessions, extensive replay value and solid balancing help keep things engaging and enjoyable throughout.

So whether gunning for mounds of collectible achievements, or just seeing how far into the epic you can get, there’s plenty of reason here to don the old hardhat and see if you’ve got what it takes to literally build a bustling metropolis from the ground up.