Towelfight 2: The Monocle of Destiny Review 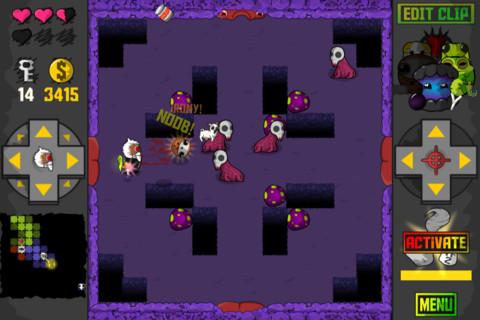 Twin stick action with a healthy dose of laughs

Towelfight 2: The Monocle of Destiny is a smart, silly, crazy game packed with some of the most creatively bizarre dual-stick shooter action you’ll ever run into. I’m not very good at it, but I keep going back to it, and I keep having fun. This game is a blast.

One fine day while walking his pet pug Bella, a distinguished-looking Indian gentleman by the name of Hardik found himself pressed into the role of champion in a battle between two gods. He’s given the mystical Monocle of Destiny, an ancient device of great power that lets him shoot animals from his face, and is then sent on a quest to free his benefactor – who, despite choosing him, doesn’t seem to think too much of his Chosen One.

That’s the setup in Towelfight 2, and as weird as it is, it only gets weirder from there. It’s a solid, fast-paced dual-stick shooter that brings a lot to the table in terms of explosive arcade action, but it’s the sharp writing and oddball humor that make it truly memorable. Jobi, the imprisoned god who anoints you his champion, ridicules your incompetence at every opportunity – at one point he wonders aloud if there’s a market for dead Hardiks, since he seems to have an endless supply – and his rival Morg dismisses your efforts by saying it’s going to make popcorn and enjoy the show, and then actually goes and makes popcorn. And in battle, when your aim is true and your shot strikes an enemy, the game rewards you with an explosion of words, kind of like comic-book sound effects but completely and very strangely random, like “Oversensitive,” “Blastastic,” “Second Amendment,” “Spicy Food” and dozens more.

Graphically, the game is colorful and sharp, and the explosive little animals you shoot from your face – “‘Jectiles,” in game parlance – are, mostly, ridiculously cute, as is Hardik himself – especially when something good happens and he briefly gives up his dignified demeanor to jump and dance like a maniac. The high-energy chiptune soundtrack is noteworthy as well, not just because it’s so good (and it is really good) but because it sounds like it legitimately belongs in an 8-bit era videogame. And while the screen gets a bit cramped on relatively small devices like my 4.0″ HTC, the layout is clean enough to keep it all manageable.

The Monocle of Destiny allows Hardik to arrange six ‘Jectiles in any order he likes and then fire them in sequence, very much like bullets in a revolver. Each ‘Jectile has a unique ability, like the Widow’s poisonous bite or the Twitbird’s “exploding hashtag deuce bombs,” and can support two upgrades that enhance its power even further. There are 40 ‘Jectiles in all, some of which can only be found in more dangerous regions of the game, and 80 upgrades, plus 14 relics of great power that Hardik can collect that will restore his health, let him shoot bags of money out of his monocle, give him the power of electricity and Heaven knows what else.

Towelfight 2 boasts a huge amount of gameplay, using procedural generation to create thousands of rooms to explore across five unique environments. Ten bosses await your attention, each with his/her/its own personality, and four different monocles mean four different ways to kill everything that stands in your way. The action is fast and furious – furry-ous, one might say, if one were predisposed to puns – and while you will most certainly die a lot, that’s not actually a problem. Jobi makes fun of you, Morg wants to draw on your face every time you’re lifelessly teleported back to the beginning and Grubb, the merchant, is willing to tell you the secret of how to avoid dying so much as long as you give him a crapload of cash first. But aside from the loss of some of the coins you collect for dispatching enemies (and the ongoing ridicule, of course), there are no penalties for dying, so even if you are terrible at the game – like me – you won’t suffer unduly for it. 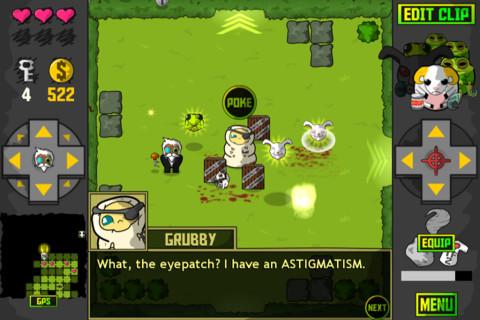 And although the in-game merchant allows you to buy new ‘Jectiles, augments and keys to make your journey easier, it’s far from necessary and not even really encouraged. Developer Butterscotch Shenanigans refers to the game’s in-app purchases as “a time-saver for players who wish to cheat,” and the button leading to the coin store is actually labeled “Cheat.”

Towelfight 2: The Monocle of Destiny is really, really good. Even if you don’t dig the humor (and I’m sure it won’t resonate with everyone, although I love it), the intense shooter action on which it’s built should be enough to satisfy even the twitchiest of thumbs. And if you enjoy a good laugh with your bizarre cartoon violence, then this is one game you really cannot miss.