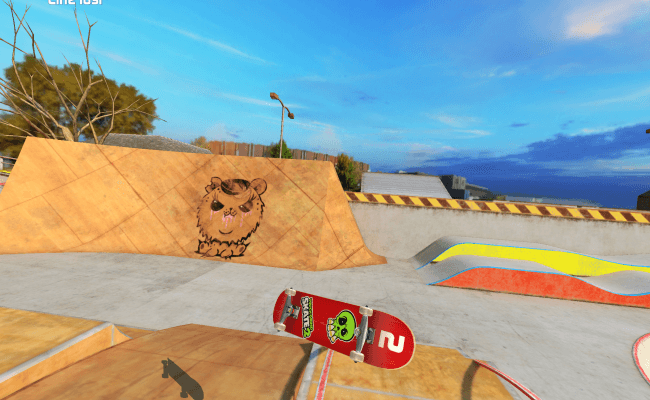 Your fingers are legs

When it comes to skating video games, I’ve pretty much played them all. From the earliest Tony Hawk titles that probably gave the genre a name for itself, to the more hardcore games like Skate, there’s oodles of creativity that has come from allowing players the opportunity to ride on a plank of wood, and launch said plank of wood along grinding bars, up halfpipes, and down into bowls that look like they were swimming pools in a past life.

The Touchgrind series takes this concept and throws away the controller. Instead of flicking an analogue stick left and right, your fingers become your legs, and the touch-screen of your iOS device is the board. As per usual, Touchgrind Skate 2 is a novel idea that can provide hours of great skating gameplay, but the learning curve is steep, and some players – like myself – may never fully click with the concept.

Touchgrind Skate 2 begins with a set of tutorials that teach you each of the basics. Everything is essentially done in the same way that you might control a skateboard is real life – so for example, an ollie (aka making the board jump) is done by lifting your front finger and then quickly lifting the back one, to flick the board into the air.

This degree of simplicity through what appears to be complexity is a breath of fresh air, and allows you to pull of crazy stunts that wouldn’t have been possible in other skating games. The board reacts to any movement you give it, and doesn’t follow set paths or animations, instead reacting directly to physics – this means you can essentially mold your own path style, and create your own tricks.

But it also means that Touchgrind Skate 2 is massively difficult when you start out, to the point that you’ll feel like you’re completely out of control and can’t really do much. The board moves awkwardly and won’t trundle into the position you want, and you’ll simply keep careening into walls and into the sides of halfpipes and rails over and over again for at least the first hour. 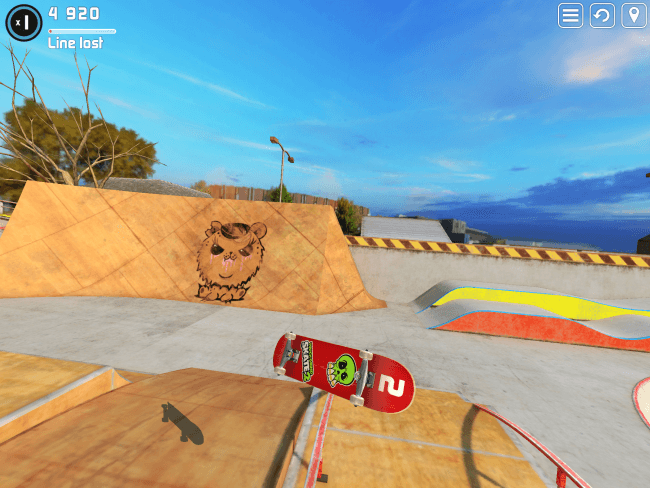 It’s just learning curve that is going to put some people off. Note that Touchgrind Skate 2 is definitely not for everyone, and some people will simply never get to grips with the controls. I personally feel like my brain half-managed to understand, such that I could get decent scores and complete a lot of the game, but certain tricks – such as the powerslide – simply eluded me. Alas, there doesn’t appear to be a free demo for checking out whether you do gel well with the game or not.

But for those people who do pick it up more easily, there’s lots to do. Challenges on each level ask you to complete a series of tricks and score combos, while you’re also given a set amount of time to get high scores and earn trophies. The game could perhaps have done with more levels for launch, but new parks are due to be added over time, which is always nice.

And the customization options are nice too, allowing you to fully pimp out your decks with stickers, new wheels, the works. It would have been even better if I could stick my own photos on my board, as per older Touchgrind games, but I’m probably just nitpicking now.

Touchgrind Skate 2 is going to be a seriously awesome, in-depth skater for some players, and a troublesome, niggly experience for others. What’s for certain is that the App Store very much needs these kinds of unique and innovative offerings in spades, and we’re excited to see what comes out of Illusion Labs next.