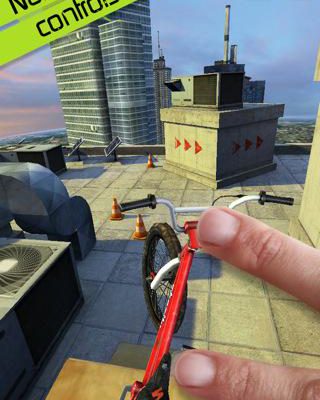 Having taught the world to skateboard with their fingers just a few years ago, Illusion Labs has moved from one act of contortion to another: schooling the art of using said digits to ride a bike.

On the surface, it might seem like the perfect substitute for those without the bottle to ride in real life. After all, there’s no chance you’ll fall off and graze your knee on the asphalt, and the physical damage you can do getting your fingers in a twist is minimal.

Yet, with more tricks up its sleeves than a wizard on holiday in Camelot, Touchgrind BMX manages to make a mountain out of what would otherwise be a fairly attainable mole hill.

It’s all a question of control. Or, perhaps, a lack of it.

Touchgrind BMX offers largely the same set up as its predecessor, putting a bike instead of a skateboard beneath two of your fingers. Again, the game requires you to place them vertically – one on the bike’s handle bars, which you use to steer, and the other on the back wheel, which controls your speed.

Lifting your finger off the latter applies the brakes, and the design of the stages calls for a mixture of speeds: ramping things up a notch as you approach jumps, before pulling things back again should you risk flying off course.

Indeed, it’s the very creativity that’s been pumped into the levels that actually ends up causing a problem or two from the word go. On the surface, said stages act as a playground, packed with ramps, jumps and tubes in a very small space that could and should provide plenty of opportunity to pull off tricks aplenty.

The difficulty is, so wild is some of the design (and so awkward the position of the camera at times), that keeping track of where you’re meant to be headed is no easy task. Should you drift off course even slightly, the game resets your position – a particularly annoying trait given Touchgrind BMX‘s fine margins, and even more frustrating should you be mid-trick.

The implementation of these tricks acts as Touchgrind BMX‘s other sticky patch. Using two fingers to control the bike simply doesn’t feel natural, and to pull off the mid-air tricks required means relieving one or both from the screen and swiping them in all manner of directions.

Pulling this off all while keeping control of the bike’s speed and steering is testing to say the least. 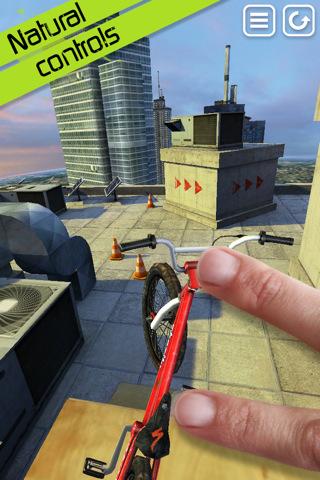 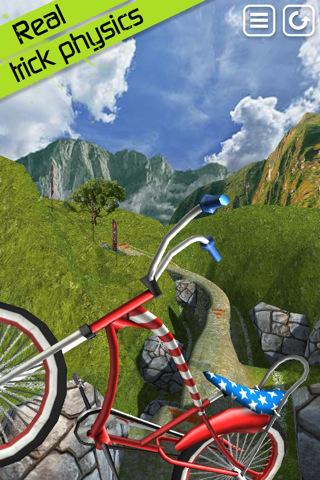 Almost like beat-em-ups of old, each move is attributed to either one swipe of the finger, or a combination. Depending on both your accuracy and, indeed, speed, you can flip the bike forward, spin it round, or twist it in any number of directions. To both accumulate points and then multiply them, the idea is to piece these moves together in a seamless string, resulting in what’s effectively an on-screen finger dance.

Touchgrind BMX creates language of its own, in truth, but one you’re required to learn if progression is your aim. Levels come with specific goals that charge you with pulling off set moves before the finish line, all too unlock fresh bikes, paint jobs, and tracks.

It’s certainly not impossible, and for those who are able both to remember the moves in the first place and then flick and switch their fingers in quick succession, Touchgrind BMX is extremely addictive. Certainly, in terms of presentation and style, this is a game that plays in the big league, and the ambition of the designers has to be respected.

Sadly, however, Touchgrind BMX is a game that, though clearly designed for touchscreen controls, is simply too big for iPhone’s boots. It’s hard to escape the feeling that play is made up of a series of compromises, and for a game with such big ambitions, that’s a trick no-one was looking to see pulled off.