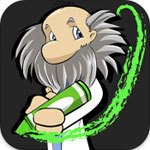 When you were a child the world was full of wonder. With a piece of paper and a box of crayons, you could make anything happen! But what if you could bring those creations to life? Touch Physics applies real-world physics to crayon-drawn objects as you attempt to puzzle your way across 50 beautiful, toddleresque stages.

In every stage of Touch Physics, there are two objects; a ball and a star. It's your job to get the ball to reach the star by drawing any number of shapes with your virtual crayon and using physics to your advantage. Maybe you'll build a seesaw and drop a rock to shoot the ball across the level. Maybe you'll build some ramps to maneuver the ball as it falls. Each level presents a new layout, often with interactive set pieces that will introduce new challenges you had never thought you'd encounter. No matter how you do it, you'll need to get that ball to that star.

Frustration sets in when you begin to realize that you don't really have the freedom to create whatever you want as the crayon-and-paper motif seems to suggest. Everything you create will fall under one of two descriptions; a straight line or a closed object. If you want to create a path that takes a big dip to gain some speed and ramps up at the end to provide a bit of a jump, you're in for a world of disappointment. Touch Physics is either going to straighten that line out for you or close off the path you've made to create a solid object. For a game that touts itself as a physics playground, they've provided a really limited toolset to work from.

While the game suffers when it comes to executing its core idea, it shines in the world of level design. Most stages offer up top notch puzzling fun that could take you a dozen different tries to complete. Each of the 50 stages in Touch Physics is unique and playful in terms of both level design and presentation. Keeping in the theme of the game the majority of levels are presented like a child's drawing. Rocket ships, rainbows and castles are scribbled out on a variety of lifelike paper backgrounds. Every now and then a level comes along that breaks from this vibe, but it always feels more like a fresh challenge than a style-wrecker.

Touch Physics has been frequently criticized for borrowing heavily from 2008's indie-hit Crayon Physics, and it's not hard to see why. Crayon Physics Deluxe not only blazed this trail, but the level of challenge and detail in the puzzles is better than Touch Physics in almost every way. But does that necessarily take away from what Touch Physics offers?

At 99 cents, Touch Physics looks, feels, and plays like a poor man's Crayon Physics Deluxe. While the quality may not reach that of the game it's trying to emulate, Touch Physics offers up a fun little introduction to the world of physics-based gameplay at a price that's hard to beat. If you've been thinking of dabbling in this world but don't want to break the bank, Touch Physics is a title is a totally acceptable place to get started. If you're a veteran of physics-based gameplay though, you might want to spend your money on something a little more polished mechanics-wise.