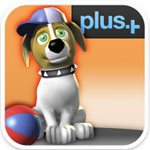 Most gamers might be inclined to call Touch Pets Dogs just another release in an endless sea of Nintendogs clones. Once you scratch the surface though, you'll find that this perky pet simulator has far more in common with The Sims than any other pet project on the market. Attending to your puppy's needs, meeting objectives, levelling up your skills as an owner, and even getting your dog a job round out this fascinating little title – and best of all, it's free!

Touch Pets Dogs is a pet ownership simulator. You'll pick your first puppy from a variety of real world breeds (and even a few robot dogs) and quickly be introduced to the myriad of pet-related activates at your disposal. Petting your pooch, playing fetch, and cleaning up his “messes” are just a few of the tasks you'll be able to perform with your cuddly new friend. You can teach them tricks, dress them up – the world is your oyster.

For my first little friend I decided on a white german shepard and named him Stanley. Stanley' a cute little bugger, and even though he's not real I can't help but feel we have something of a bond. Sure it sounds silly, but isn't recreating that special relationship between pet and owner the entire purpose of games like this?

Stanley, like all of his friends at the adoption agency, has needs. This is where the game really starts to branch out from a run of the mill puppy simulator, and turns into something more akin to a Sims game about pets. Hunger, water, cleanliness – nearly a dozen different stats are tracked that determine a pet's happiness. Each of these stats slowly deteriorates over time, and can only be brought back up by engaging your puppy in certain activities. Feed your dog and his hunger meter will improve. Throw a stick and his fetch meter will go up. The list goes on and on.

All of these meters feed into your dogs happiness, which is something like a mega-meter that sits at the top of the screen. Once it goes from green to platinum, your dog's happiness will start to earn you puppy bucks. These are essential as you'll need this imaginary money to pay for everything from new clothing and toys to snacks and adventures.

Once you've grown accustomed to the basics, you can career path your dog into crimefighting, rescuing, science, politics and celebrity. Since there are too many animals in politics already, I decided that Stanley should see what he could do in the K9 Unit and become a crimefighter. Like everything else in the game, choosing a career path costs puppy bucks. A first career sets you back 3000 doggie dollars – a pretty penny considering where you start out. But what it brings to the table helps elevate Touch Pets above a mere Nintendogs clone.

Once we'd decided on a career path, we were quickly given our first assignment – to stop a burglar in our very neighbourhood! Each mission will be met with a “Career Step Readiness” meter. Based on the mission, your dog will need certain strengths to perform adequately. In this case my puppy's chasing skill needed to be up to snuff. If it wasn't I could always go back and “warm up” for the career step, raising his skill the old fashioned way through lots of training and exercise. Other career steps may need certain items, so you'll sometimes need to work on developing other skills before continuing along the career paths.

In the world of police dogs, Stanley's no slouch. He caught that burglar in no time flat. Like other landmark moments of progress, completing career steps will give stat bonuses and items as rewards. Stanley got a police hat for chasing down that bad man, and it looks mighty sharp on his adorable little head.

Like a real dog though, your virtual pooch needs to be fed every day – and foods does not come cheap. Touch Pets Dogs is among the first games in the App Store to bet its financial success entirely on micro-transactions. This means you'll need to spend real world cash to keep your dog well-fed and healthy. Don't think ngmoco will let your little pup starve to death – your inventory of food will always regenerate 2 bowls to keep your puppy from coming down with a case of skinny-dog disease. But if you want your puppy to have the energy it needs to become a bright young superstar of playtime, you'll need to break out your iTunes account and get spending. (And don't think we didn't catch on with that little scam of letting us adopt more dogs – there's only so much food to go around, ngmoco!)

Should you happen to have friends that play TouchPets and have an ngmoco+ account, you'll be able to invite their puppies over for playdates and improve the sociability of your dog. If you don't know of any friends with the game, don't worry – you can set the game to post photos and updates to your Facebook which is bound to bring Touch Pets Dogs fans out of the woofwork.

Our only real complaints with Touch Pet Dogs lay with some of the technical aspects of the game. You'll use the tilt function to play with certain toys, but go too long without touching the screen and you'll be kicked into standby mode. Other games employ a simple tweak on the backend to address this, but Touch Pets Dogs neglects to employ this. Even more frustrating is the online-only nature of TouchPets. Sure we love the social aspects of the game, but they're not central to your involvement with your dog. So why is it that you can't play the game when you're offline? If you have an iPod Touch and want to break out your puppy while waiting for the bus, you're going to be completely out of luck.

Fans of games like The Sims are going to absolutely fall in love with Touch Pets Dogs. And while Touch Pets Dogs has a lot in common with Nintendogs, it sets itself apart in a sea of clones by offering up some clear goals, easily identifiable needs, and a social aspect on an iPhone gaming network that's second to none. If you've ever wanted to put a puppy in your pocket, Touch Pets Dogs might just be the best, littlest pet shop you'll ever find.