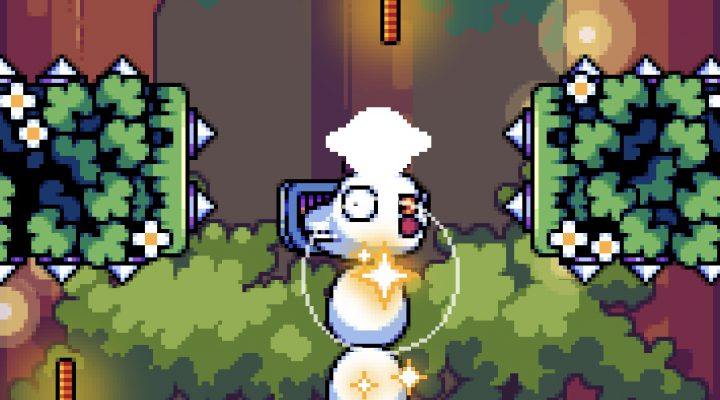 Tries to do something new with an old template

The pace of the game just doesn't feel right

Not as exciting as it needs to be

Total Eggscape (download from the App Store and Play Store) is an interesting one. It’s not quite a fast-paced platformer, not quite a twitchy puzzler, not quite midcore or hypercasual or something else. It’s an in-between game, liminal in its way, and while it’s entertaining it never feels quite as entertaining as it could be.

You’re playing as a chicken, laying an infinite tower of eggs in order to escape from your prison. Press down on the egg button and you’ll start to lay, only stopping when you lift up your digit or die. Swipe left and right on the screen and your pile moves in that direction – you can move horizontally when you’re not moving vertically as well.

Using these simple controls you need to make your way through a series of fiendish, spiky, fiery obstacles. There are circular saws, jagged edges, fire spitting flowers and much, much more to get past. You’ve got coins to collect as well, and there are chilli peppers that speed you up if you snaffle them.

The pace of the game is slightly strange though and that’s made even stranger by the controls. You can’t correct a mistake if you’ve gone slightly too high, leaving you at the mercy of pointy things that seem to extend further out than they appear.

In some sections the upward motion is taken out of your hand, and in a way these moments feel more exciting – scrabbling left and right to avoid the oncoming death-dealing obstacles will raise your pulse far more than the other more sedate sections where you’ll die in ever-annoying ways.

Part of the problem here is you never feel like you’re making any real progression or learning the ropes. You’ll die, get a bit miffed about it, have another go and die in another slightly frustrating way. And eventually those little nips of annoyance will be too much and you’ll give up altogether.

Total Eggscape is well put together and it tries to do something a little different with the shape of the one-finger arcade experience, but in the end it lacks any real spark, any vitality, and that leaves you wondering whether your excitement itch wouldn’t be better scratched playing something else.