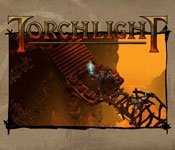 The dungeon crawler. It’s a time-honored tradition amongst gamers. Whether we’re talking Dungeon Siege, Titan Quest or the more casual-friendly FATE, nearly everyone has played a game about killing orcs and selling pants. Well – almost everyone. The genre has always seemed more intimidating than need be, and Torchlight is looking to change that. We don’t want to go out on a limb here, but this might just be the first dungeon-crawler that’s fun, simple, and accessible to everyone.

When writing about Torchlight it would be impossible to not mention the influence it draws from Blizzard properties. Elements of both Diablo and Warcraft are present here, and in droves. Runic Games, the team behind Torchlight, is actually made up of former Blizzard developers that created the Diablo series. With the release of Diablo III looming on the horizon, it seems only fitting that the team that welcomed Diablo into the world release some competent competition in the form of Torchlight.

Indeed, Torchlight can be summed up as little more than an accessible entry point into the world of Diablo-style gaming. I’d once heard a friend describe this style of action gameplay as combat shopping:  kill a monster, a pair of pants pops out. Torchlight is no different. To attack you’ll click the left mouse button. To cast a spell you’ll click the right. Any other doo-dads or extra spells you might want can be assigned to your number keys.

This isn’t a complaint mind you. While Torchlight retains the well-loved control scheme of Diablo, that doesn’t mean the two games are exactly alike. Torchlight breaks from its predecessor by being more accessible to new audiences, easier to understand, and more streamlined in terms of what’s offered. Torchlight isn’t Diablo, it’s Diablo Light. From where we’re standing, that’s a good thing.

If you’re new to the genre, the idea behind Torchlight is simple. You’ll navigate a seemingly endless labyrinth of underground caverns fighting an unfathomable number of monsters and collecting the items that fall out of them. Some of these items you’ll want to keep and equip to improve your characters abilities. Those you don’t keep you’ll sell in town, using the money earned to buy more items to improve your abilities. Lather, rinse, repeat. As you progress your character will level up, allowing you to purchase new abilities and improve their general stats like strength and defense.

While the dungeons are massive and sprawling, Torchlight manages to keep the scope of the game small and manageable. There’s only one town to visit, three quest givers, and a handful of merchants. You’re not going to get lost in new villages, have trouble deciding on a character class, or feel overwhelmed by a massive and meandering storylines. Torchlight has a keep-it-simple mentality, and it’s absolutely a breath of fresh air.

All this praise makes it sound as though Torchlight is flawless, and like any game that’s simply not the case. Veterans of the genre will rightfully argue that Torchlight doesn’t bring anything new to the table.  The game is a perfect candidate for some sort of co-operative mode, yet there’s no multiplayer to be found. And the lack of a decent tutorial meant that there were some neat tricks that simply didn’t dawn on us until we stumbled across them accidentally. I can’t count the number of town portals I opened to sell my inventory before discovering I could give items to my pet, click a button, and send him back to town to sell while I kept on fighting. The game was filled with great little touches like this but failed to let you know about them.

Pets were actually one of the nicest touches in the game once you realized everything they were capable of. You could use them as a pack mule and a salesman, but you could also set them to attack monsters or defend your character. You could even teach them spells to use in combat and offer up some basic equipment to boost their stats. But the coolest thing?  Feeding your pet different fish (you’ll catch fish in a manner almost identical to fishing in World of Warcraft) will temporarily turn your pet into a different creature with different abilities. Almost always by your side, your pet acts as both a faithful companion and a fierce combatant.

Speaking of Warcraft, the game seems to borrow its presentation pretty heavily from the Warcraft universe. Many of the game’s enemies served to pay homage to creatures found in the lands of Azeroth the art style is incredibly reminiscent of Warcraft III, even the abilities upgrade menu looks cut and paste from Blizzard’s highly successful MMO.

Much to our surprise, the lack of originality in terms of presentation did little to dissuade us from liking this game. In fact, if anything it upped our enjoyment. What avid Warcraft gamer wouldn’t love the opportunity to try a taste of dungeon-hacking with a well-loved presentation?

So often in this industry we hear about casual games that are "bridging the gap" between casual and core gamers, but we so rarely hear about it going the other way. Torchlight is a triumph of game design. The developers Runic have taken a genre that traditionally appeals to only the hardest of the hardcore gamer and have found a way to open it up to everyone. It’s simple, it’s straight-forward, and it’s fun. Combat shopping rules. Be a part of it.

10 Days to Save the World Review