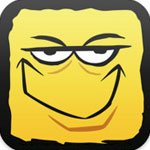 Putting a good game in the iPhone App Store can be a real balancing act, and few titles know this as well as Topple 2.After all, balancing is what it's all about. But the balancing act ngmoco has to pull off has to do with more than just the gameplay.They need to balance to success of their original title with the expectations of its fans.Was it too soon for a sequel?

Like any good puzzle game the concept behind Topple 2 is simple.Tasked with building a structure of a certain tallness, you'll need to reach the goal height using a selection of differently shaped blocks.Should your tower topple before you reach the goal, you've lost.Should your allotted time run out, you've lost.Added into the mix is the iPhone's accelerometer which let's you tilt the device to try and sway your structure back to stability when things start to get a little shaky.

If you were a fan of the original Topple, you're going to find a lot to love in Topple 2.While the original introduced us to the idea of block stacking, the sequel has added some much needed variety to the series.Replacing Topple's fairly limited nine levels is an adventure-style mode that spans 30 levels, offering up objectives and environments not seen in the original.  New gameplay elements creep up pretty frequently.Some levels will see you safely lowering an egg from the goal line to the ground using the tower you've constructed as a cushion.Some levels will be played upside-down requiring you to work from bottom to top.Others still will have you balancing two different towers or trying to build a power line out of conductive blocks.All of the new gameplay modes offer up a great level of challenge and help to keep things fresh, which is something the original was sorely lacking.

Attempting to play the game as intended can often result in a good amount of challenge, though more often than not that challenge can be circumvented by simply shooting new blocks to the bottom as soon as they appear.The speed involved in this “cheat” means that your tower will likely reach the goal line before it has the chance to tilt over.It was the only real problem with the original Topple, and it doesn't look like the developers felt the need to address it in Topple 2.  As far as other negatives go, it should also be noted that Topple 2 features a multiplayer mode that can only be played locally over the same wi-fi network.For most gamers, getting a chance to do this isn't very likely.

The blocks in Topple 2 display cute little faces whose expressions change with their own personal level of safety.Nestled soft and secure at the bottom, that cube you just placed will display a calmed face of relief.That triangle that's teetering on the edge though?There's a definitely look of panic.It's a big part of the games art style, and it gives Topple a distinct personality all it's own. Adding to that is the games outstanding soundtrack.Full of mirth and whimsy, it feels like a children's storybook come to life.It's all very upbeat and cheery.As a fan of game music I'd be more than happy to purchase it as a stand-alone iTunes music release.

Equal parts Jenga and Tetris, Topple 2 adds a good deal of variety to the fun play style that debuted in Topple.It may have only been a little over 3 months since the original's release, but ngmoco took the steps needed to beef up it's offering and make a sequel that is well worth the $1.99 investment.If you're a gamer with a taste for stacking and balancing, you're going to find a lot to enjoy here.