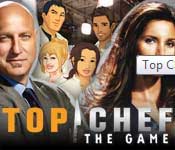 Cooking games, pioneered by the likes of Cooking Mama and Hot Dish, are nothing new. But Top Chef, based on the hit reality TV show, dares to do something different by tasking players to actually create dishes instead of simply following recipes. But does it succeed, or is it a case of too many cooks spoiling the broth?

For those unfamiliar with the Top Chef TV show, amateur chefs compete against each other in a variety of cooking challenges including Quickfire (preparing dishes with specific criteria ) and Elimination (cook your heart out, making multiple courses). These dishes are judged and scored, and the chef with the lowest score “packs their knives” and heads home.

In game, you play a young and naive chef named Anna. As you progress, you learn more about Anna and the other contestants – some friendly, some not – through short intro and outro cutscenes. Naturally, you have a rival, who’s named Charles. He is arrogant and condescending, and wouldn’t it feel great to knock him down a peg!

Hosts Padma Lakshmi and Tom Colicchio from the show are here. The graphics are cartoony, and all the characters are distinct and well-drawn. Even the food looks tasty! The music is taken from the TV show, adding to the authenticity.

The "meat" of Top Chef is your time in the kitchen. Anna has to create dishes in two Quickfire Challenges and one Elimination Challenge in each of the 15 episodes. Before each challenge, Padma briefs you on what you’re about to cook and what requirements you have to fulfill. Anna gives you some helpful tips, then it’s out of the frying pan and into the fire.

After Anna decides what dish she’ll prepare, like a canapé, grilled meat or sandwich, a recipe appears. But this is where Top Chef becomes wonderfully inventive. Rather than explicitly following a to-do list for a dish, you have to add the ingredients that you think are most appropriate.

Behind Anna is the pantry, which houses the ingredients. There are three types: vegetables, meats and proteins, and flavorings (spices, herbs, fruits, whatever can be part of the dish but not a main component). Each ingredient has a distinct flavor like spicy, sweet, savory or salty. Sometimes you’ll just need to worry about the color of the food, or an ingredient’s nationality. Higher levels have ingredients with more than one characteristic.

For example, to make a vegetable side dish, the game might ask you to use a red vegetable. If they’re available in your pantry, you can choose to use a tomato or a red pepper. Then it will ask for a bitter ingredient. Do you use the olives or the lemon? The choice, refreshingly, is yours.

Initially, you have three workstations where you prepare each step of a recipe, which increase you progress further into the competition. Like a good time management game, it is important to multi-task, grabbing new items from your pantry for when Anna has a free moment. A status meter fills faster when Anna stays on task (just like a real chef). Once all the parts of the dish are complete, you’re presented with a picture of what you made along with its name. You’ll have to complete all your dishes before time runs out.

As a foodie, I was very excited by the possibility of crafting my own dishes. Some of the combinations are very distinct, like pairing orange and fennel (real food tip: add black olives, sliced onion, salt and olive oil for a delicious salad!). To succeed, you really have to know your food. For example, even though the game didn’t tell me explicitly, I knew that when the game was asking for a sweet vegetable for a salad, I could use beets.

The concept behind Top Chef is quite similar to Gamelab’s Jojo’s Fashion Show, where you had to dress models by selecting clothing off the racks to conform to a given style like Modest, Racy, Summer or Winter. The judging, where you’re awarded a five-star rating, and the availability of Shuffle and other power-ups are also familiar. However, the concept that made Jojo’s Fashion Show so fun doesn’t always translate smoothly into the world of food.

Sometimes I wouldn’t have the right ingredient in my pantry, and in spite of using my shuffle power-up, still could not fulfill the recipe’s request. Other times, foods would change categories that were opposites. Tamarind was bitter in one challenge, but sweet in another. Some categories were a little ambiguous, like using “dark” food.

Also confusing were foods my tastebuds identified one way, but the game called it another; basil, to me, hits me as savory, but was called sweet in the game. Flavors that I know work in real life, like basil and garlic, aren’t acknowledged as combinations in the game. Other times, I would stumble upon previously unknown combinations, like fennel and carrots.

Because the game doesn’t separate which part of the dish you’re working on, it’s very hard to keep track of which ingredient you’re preparing for what dish, and consequently, which ingredients should be combined to make a better dish.

There are a few other oddities as well. Animations don’t always line up with what you’re doing – apparently, adding soy sauce means to stand at a station and chop. But weirdest of all is the writing in the game. If you add a particular ingredient twice, it will appear twice in the name of the dish, resulting in things like “Italian Dumplings with Lamb, Lamb and Kale Sauce.”

The judges’ dialog is very obviously plugged in. I was ordered to make a tuna salad, and Tom’s observation was, “I wouldn’t have thought of using tuna, but it really works!”

Top Chef brings a number of great new ideas to the cooking game genre. Perhaps if the developer gave us a cookbook, explicitly letting us know exactly what flavor each ingredient was, and a glossary of combinations, things would be much clearer. As it stands, Top Chef is a smorgasbord of potential, but the finish is a little off.