Tony Tough and the Night of Roasted Moths Review 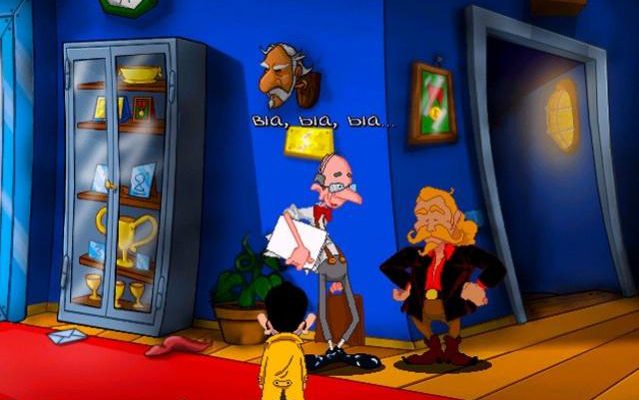 A blast from the past that is, thankfully, a blast.

2012: the predicted year the world will end…for point-and-click adventure games.  The genre has been around for decades, and coming up with new ideas is getting tougher.  Developers have begun looking to the past for inspiration, and more recently, direct relief.  G5 is trying their luck with 1997’s Pilot Brothers, Zojoi is completely revamping 1987’s Shadowgate, and DotEmu has traveled to 2002 and returned with Tony Tough and the Night of Roasted Moths.

Tony brings with him a self- (and player)-deprecating sense of humor, passion for the truth about aliens and conspiracies, and a professional love of appropriate wig usage.  As a detective with the Wallen & Wallen Investigation Agency, Tony has years of sleuthing under his belt, even if his colleagues don’t appreciate his genius.  The Halloween eve case he’s assigned to in Night of Roasted Moths begins as a search for a candy-stealing madman, but quickly turns into a hunt for his missing dog/tapir/wild boar, Pantagruel (kidnapped by the same pumpkin-headed candy thief). 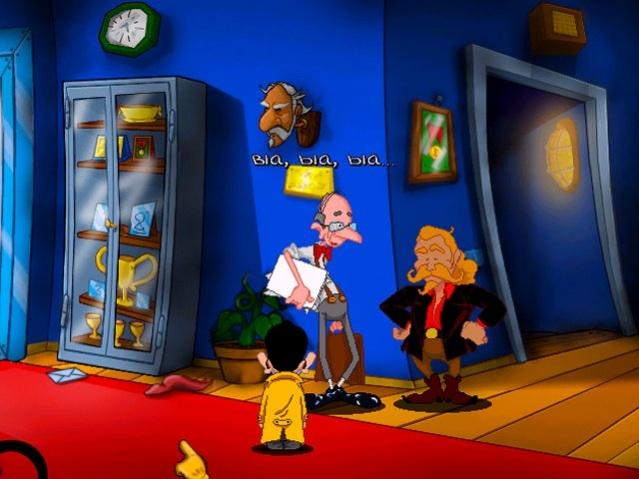 With only four interactions available throughout his quest, Tony Tough is more reminiscent of Sam & Max than more classic—and sometimes overwhelming—adventure games, like The Secret of Monkey Island.  You’ll guide Tony through a colorful cartoon world full of items and characters, which can be examined, talked to, used, or taken via the right-click interface.  Although his journey begins very linearly, in the confines of the Wallen & Wallen agency, the real adventuring and exploration begins once Tony makes it into Halloween Park: a vast, carnival-like atmosphere filled with intersecting scenes and plenty of people to interrogate.

These interactions mostly revolve around humorous anecdotes and questions posed by Tony, although the tone does vary between ridiculous and over-the-top insightful.  A long discussion with one of the sideshow beasts results in a reciting of the poem “Tyger” by William Blake, in its entirety, along with the beast’s philosophical explanation of it.  More often, you’ll receive snarky and joking comments from Tony in his nasal, nerdy voice.  Upon telling him to “use” a fire, he responds, “If I go any closer, I’ll risk exterminating the colony of lice I’ve been raising on my person;” after a long chat about how a pirate came to have a wooden leg, he observes “Pirates are always extremely proud of their bodily mutilations;” and when trying to pick up a hole, he snorts, “Better not pick that hole up.  All the things I have in my pocket might just fall into it.”

Although the game is filled with such delightful conversations and commentary, the meat of the gameplay is still exploring the world, collecting items, and using what you’ve learned and found to figure out where Tony’s dog has been taken.  Halloween Park is huge, with dozens of scenes and many interior locations to search.  The park is expansive enough that Tony will draw a map as you progress, allowing you to fast travel to any previously visited scene.  Even playing on Easy (there are two modes: Easy and Hard), you’ll likely find yourself backtracking and finding new paths you didn’t notice on the first trip through. 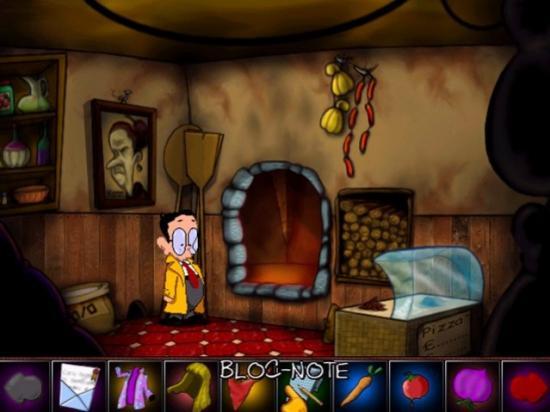 Once you find your way to key areas, the puzzles you’ll need to solve are fairly straightforward—not in an overly easy fashion, but that they can be figured out with logical thinking.  Pulling on a cow’s tail to make it drop a bouquet that’s stuck in its mouth, or putting a stick in a witch’s cauldron, are reasonable solutions to deduce.  Some challenges do require a significant number of steps to complete—for instance, fetching just milk for one quest will have you visiting five different areas and using over a half dozen items.  But even if Tony likes to show off his intelligence by calling you “oligophrenic,” the puzzles he’s solving won’t require a genius-level IQ or patience to complete.  Actually solvable puzzles, combined with the fact that there is no method of failure or death in Night of Roasted Moths, creates a very laid-back and strictly enjoyable adventure experience.

This level of playability for a game that is technically ten years old is somewhat surprising, but Tony’s Halloween tale is not without datedness.  Some jokes in the game are past their prime, like multiple references to The X-Files in Tony’s office.  The options menu would also greatly benefit from an update, as it presents all of its features without any explanatory text.  There are some great preferences that can be edited to make Tony’s adventure your own—like playing the whole game with a retro sepia overlay—but figuring out what each option does is more challenging than getting Tony a date with the Tunnel of Love attendant.

Those complaints are minor, though, in an otherwise treat of a game.  Being able to skip dialogue and speed up Tony’s walking speed help make what is an older title feel relatively current.  This is a meaty adventure worth trying out for next Halloween—or any time of the year.  As Tony would say, do it for “selfless love of mankind or a predilection for prodigal deeds of philanthropy.”  Or just for fun.