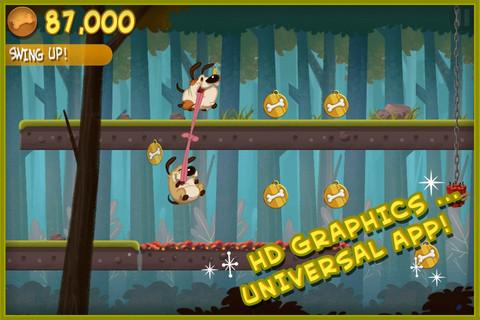 Even though it has been two years since it came out, iOS game developers are still chasing the model that Rovio laid down with their breakthrough hit, Angry Birds. Tongue Tied is a title that, while in an entirely different genre, owes much of its concept to Angry Birds and most definitely adds nothing new to an already mundane style of game.

You know the story of Tongue Tied if you’ve played more than three iOS games. The game gives you a number of levels (and to be completely fair, a good number of levels are here for you to play—50 to be exact) and you’re graded on your ability to perfect each stage. In this case instead of throwing birds at constructs, you’ll be controlling two dogs that have their tongues’ tied together and are running sideways across platforms. Along the way, you’ll want to swing them up and down to collect little doggie coins and bust up doggie bags and boxes. Additionally, as you progress along the levels, new challenges, concepts, backgrounds and so forth will be doled out in attempt to keep things fresh for players.

Swinging them seems pretty simple—swipe the front dog up or down or swipe the back dog up or down depending on the circumstances that are presented to you. Unfortunately since the game takes into account swipe angle, speed and so on, it’s actually extremely hard to get an accurate read on just how exactly to swipe these canines in such a way that doesn’t send them careening off cliffs. The more I’ve played, jumping gaps seemed to work best by swinging the dog in the back as hard as you possibly can forward.

Then again, I still found myself so routinely unable to jump the seemingly easiest of gaps—let alone focus on getting the coins—that I routinely found myself closing out the application out of frustration. If I wasn’t under-jumping gaps then I wasn’t getting enough air underneath the dogs, sending them below the platform I’m aiming for and to their brutal deaths. Other times, out of frustration, I would fling them so hard that I would not even be able to see them until they caught up to the camera. I understand the want for creativity and player inventiveness, but we’re talking about simple navigation here, and I never got a feel for how I should be controlling these puppies.

Tongue Tied adds almost nothing to the iOS platform that has not been seen hundreds of times over, even if at first glance it does look like it offers an original twist. As it stands, it’s a non-offensive, cute, straight-forward title that with mechanics that render it largely unplayable.