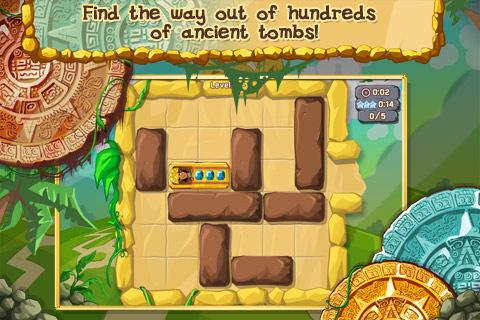 If you’re fan of the puzzle genre, you’ve probably played a version of this game before. It’s typically cars or other vehicles, and goes by names like Parking Lot or Rush Hour or something, but the setup is always the same. You need to slide pieces around on a grid to free up a specific piece so you can move it off the board. Tomb Slider takes that exact premise, puts a weird story setup to it, and sets you loose on a ton of different levels.

The sliding puzzle gameplay of games like Rush Hour and The Heist is reproduced flawlessly in Tomb Slider, though they decided that instead of cars or something similar that would kind of “fit” the setting, they went with an Aztec guy accidentally buried that you need to free and extract from his premature tomb. It’s…. weird. But it also has zero effect on the gameplay, so if you like slider puzzles, then you’ll be happy to know that they got that part right.

The best thing about Tomb Slider is the amount of puzzles in the game, which stand at over 350 different set-ups. On each level you can earn up to three stars depending on how many moves it takes and how much time ticks by. So in addition to just finding solutions, you can also go back to find better or faster ones, which gives fans of these kinds of games reason to play levels over again. In an interesting twist, meeting those goals can unlock hints to use on later levels that aren’t so easy.

But if you don’t like the timer or move tracker pressure, and just want a more chilled, zen-like puzzle solving experience, Tomb Slider has you covered. There’s a “relax” version that strips out both of these metrics and just lets you enjoy the game while you take your time. It still tracks the moves and time, mind you, but doesn’t attach stars to it – so taking 30 seconds and 30 minutes gives the same score.

Tomb Slider also employs an in-game achievement system that reaches out and syncs with Open Feint and Game Center if you use either of those services. If you don’t, you still get to enjoy the carrot on a stick mentality of trophies offline, so it’s nice that they took the time to cover everyone. 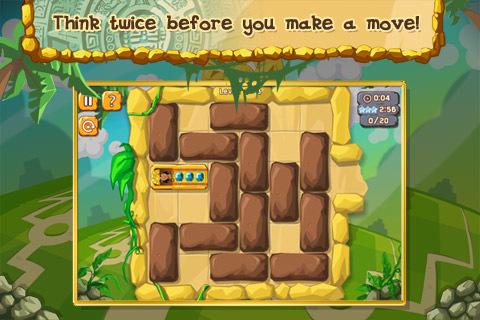 It would have been nice if the background or art assets changed between various levels to break up the look of the different sections. Unfortunately everything looks the same level after level, and after some time – even though you’re looking at new puzzles – it feels like you’re spinning your wheels a bit. Even some variety amongst the different rocks you’re sliding around would have served well in breaking it up a bit.

I can say I had no clue what kind of game Tomb Slider was going to be when I first launched it, but with a title like that, logic slide puzzler wasn’t very high on my list of potentials. While the setup is truly bizarre (especially having been so well-realized in the parking lot scenario) the puzzles are what matters here, and in that respect, Tomb Slider delivers.

Clash of the Dragons Review