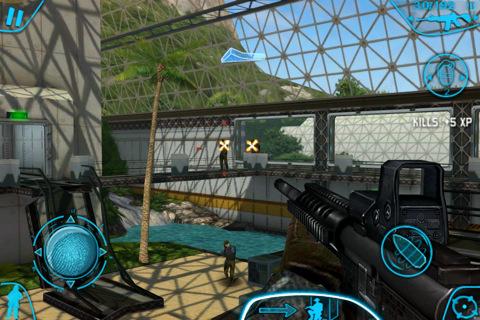 Rainbow Six: Shadow Vanguard is a competent tactical shooter, but the multiplayer fails to impress

Up until now, Tom Clancy’s Rainbow Six games have been noticeably absent from the App Store. Honestly, that’s a little surprising since the franchise has had games made for just about every platform. Now, however, Gameloft (which has a well-deserved reputation for quality shooters) has released Tom Clancy’s Rainbow Six: Shadow Vanguard for the iPhone. Like a lot of Gameloft titles, the game offers a pretty solid play experience… though it does contain a few issues that detract from the overall.

Much like the rest of the Rainbow Six titles, Shadow Vanguard is a tactical shooter. If this descriptor is unfamiliar, here’s how it works: the game is a shooter at its core, but players command a team instead of an individual, and trying to run-and-gun through a level doesn’t really work. Instead strategy is the way to go: before breaching a new room, it helps a lot check out what things look like by sneaking a snake camera under the door. Doing this allows players to make sure the coast is clear; if it’s not, then players can issue orders to squadmates to take out enemies when the room is stormed.

The single-player campaign is pretty substantial, featuring around a dozen missions with multiple objectives (including bonus achievements). By meeting the objectives and making headshots, players can amass experience points that are later used to upgrade weapons and equipment.

The game also features a multiplayer mode, though it feels like it should be better than it is. While there are five different deathmatch maps that can support up to ten players, the deathmatches are often frustrating thanks to the irritating spawn points that will sometimes resurrect a player in the middle of an enemy crowd. There’s even an online co-op mode, where three players can work together in the campaign maps, but it’s impossible to coordinate things because there’s no way to communicate (neither by speech nor by text). Both multiplayer modes suffered regular amounts of lag, too.

Managing the squad and issuing commands is handled via the game’s controls, which are more than a little intimidating at first. Thankfully the first thing Shadow Vanguard does is put players through an extensive tutorial to familiarize them with the controls and mechanics. Even then though, the game can be difficult to fully get the hang of thanks to the fact that there’s stuff all over the screen. 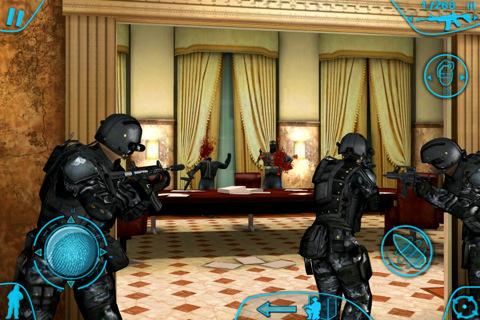 The usual joystick that controls movement is on the left side, while the camera is controlled by swiping a finger around the screen. However, adjusting the camera with one’s right hand means that players run the risk of accidentally hitting the trigger button. There’s an option to use gyroscopic controls if you want to avoid this problem, and they work pretty flawlessly once you get the hang of it. There are also a ton of buttons that are used to control all the different actions; while they’re easy to see and understand their purpose, the drawback is that they kind of cramp the screen.

Visually, the game looks pretty stunning. In fact, the urban/indoor environments look amazing on the Retina display, as do the character designs. However, it should be noted that the iPhone’s brightness needs to be cranked up pretty severely because it’s hard to see things when the levels are dark. Music and sound, unsurprisingly, are also pretty top-notch.

Playing Rainbow Six: Shadow Vanguard is a bit of an odd experience, mainly because the the multiplayer gameplay isn’t quite as solid as it was with Modern Combat 2 and N.O.V.A. 2, the last big shooters that Gameloft released. For the most part it’s a well-made shooter with a high-quality campaign, but players might want to forego playing online until the development team irons some of the kinks out.