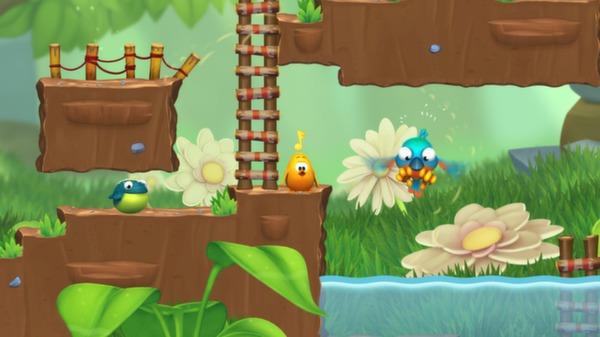 Right off the bat, Toki Tori 2+ feels different than its 2001 predecessor.  Instead of a lengthy narrative intro detailing the reason for Toki Tori’s adventure, we’re thrust into his chicken feet, plodding forward as dangerous geysers of oil burst out of the ground.  Toki’s friends scatter before us, leaving the plump, eponymous hero alone in a deteriorating world.  Toki pushes onward, through the vast island that has replaced the singular stages of Toki Tori, ready to reunite with his flock and save the day once more.

Toki Tori 2+ places significant emphasis on exploring its lengthy levels, linking each via numerous entrances and exits and an overarching map that feels like one cohesive world.  Unlike the one-off, timed stages of its predecessor, the modern Toki Tori is free to explore levels at his own pace, in any direction and order he chooses.  There are no eggs to collect: Toki’s primary goal is to make it through each level, traveling around the map until he reaches the central town where his flock has gathered.

Of course, while Toki will be traveling through lush, vibrant environments, this is no walk in the park.  Each level is packed with puzzle-platforming challenges that are reminiscent of his previous adventure, but simultaneously deeper and more subtle than the arsenal-focused trials of Toki Tori.  Instead of numerous stage-specific skills with a limited set of uses, the hero of Toki Tori 2+ has unlimited access to only two abilities: singing and stomping.  While these may seem like trivial actions compared to the bridge-building skill or baddie-halting freeze ray, Toki still accomplishes those tasks, and dozens more, with ease.

The wide variety of uses for Toki’s two skills is one of Toki Tori 2+‘s most impressive feats.  When combined with the right creature or environmental agent, Toki is able to tackle any puzzle thrown his way.  His song attracts many creatures, including bubble-spewing frogs, light-wielding butterflies, and crabs that live inside wooden blocks—our assistant bridge-builders.  His stomp stuns or scares them away, knocks objects off ceilings, and breaks through flimsy wooden boards.  Most puzzles require that many of these actions and others available be combined to progress: a standard obstacle might require Toki to stomp an eggplant-esque creature to a hungry frog, who in turn creates a bubble Toki can ride to a previously unreachable height.  A later, more complex version of the same puzzle requires Toki to float from one bubble and fall into a second after setting up a delicately timed chain reaction.

As in the first Toki Tori, most challenges have a specific order that actions must be completed in—the frog has to be fed before he’ll produce a bubble—and it is possible to trap Toki in an unwinnable position.  Thankfully, there are checkpoints scattered generously throughout every level, often immediately before and after each puzzle.  Toki is able to use his singing ability to produce a melody that will reset him on the last checkpoint, making failure a mild setback. 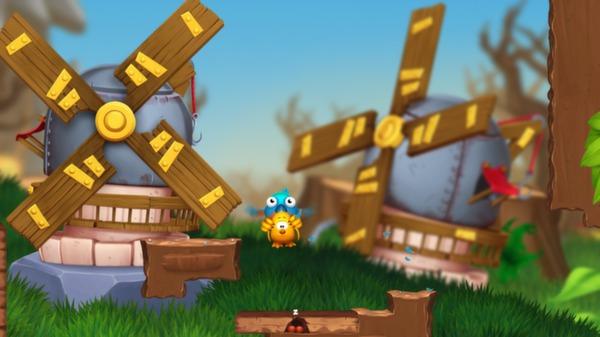 This reset function, along with four other useful melodies, are subtly taught to Toki Tori throughout his adventure.  After landing in your first inescapable pit, a small white bird appears and sings out a melody.  With no other choice, it’s only natural to try to duplicate his song—by tapping lightly for a short note and holding the key down for a long note—which results in freedom and a new song learned.

This same method of “show, don’t tell” is used for nearly all features in Toki Tori 2+, including methods of solving puzzles.  While your initial trip to the island’s center feels linear at first, you are actually capable of taking multiple exits and paths to meet your goal.  Toki’s two abilities are all that is needed to solve any challenge in the game, yet certain puzzles might seem impossible until they are presented in a more educational format.  Electrical slugs constantly blocked doorways that I thought were impassable, until a later area made it explicitly clear—through my own actions, coerced by the level’s setup—how to dispatch them.  I had the power all along.

This understated way of teaching players to solve challenges highlights the brilliance of Toki Tori 2+‘s varied puzzles and how much Two Tribes has made possible with a small number of actions.  What seems obvious in one context is baffling in another, and it’s only through faith in the player that such intricate puzzles are pulled off.  Unfortunately, that same faith has created a map and method of progression that is more obtuse than many of the game’s puzzles.  Around the halfway point in the game, Toki receives the ability to fast-travel to previous locations.  This skill, another melody, is taught in the same fashion as all the others—a little bird tells you—but the fact that you can only use this ability on checkpoints is never mentioned and is actually too subtly hinted at via a small icon.  With exploration opened up even further and almost too many locations to choose from, the map thankfully hints where you should head next, but why you’re going there or Toki’s goal at this point is hazy.  You could choose to disregard the game’s direction and simply visit levels to collect the golden shards scattered around the world, but even their purpose is shrouded in unexplained mystery, making the act of collecting them feel potentially life-changing, or entirely futile. 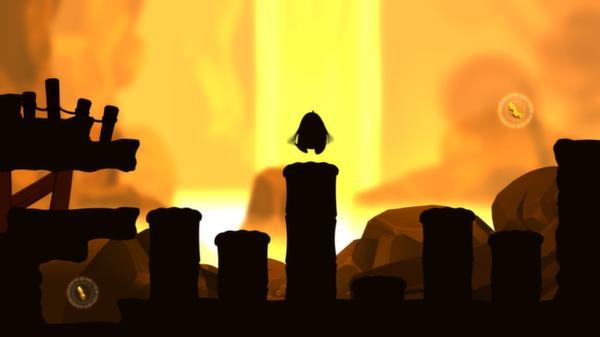 While this vague direction and overwhelming map often reminded me of Fez, so do many of Toki Tori 2+‘s praiseworthy features: its colorful, cheerful aesthetic is unbelievably soothing, even amidst the brain-sweating challenges of its puzzles.  Within this distilled joy, though, there is a hint of darkness: Toki’s deaths don’t result in an explosion of feathers or falling off the screen.  When he drowns, his lifeless body floats to the top of the water; when electrocuted, he lies still, a blackened husk.  This is just one of many small details that Two Tribes has paid painstaking attention to, like the fact that creatures that are afraid of the dark (including Toki) shake and become bug-eyed when trapped without light, or the random giant eggplants added to levels’ backgrounds as an homage to the eggs of the original title.  There are numerous secrets to uncover (yes, the gold shards are useful), nods to other games, and random surprises that might not serve any purpose except to bring a smile to players’ faces.  That is, in an eggshell, exactly what Toki Tori 2+ does.