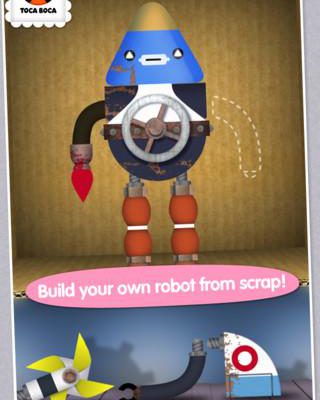 Toca Robot Lab is a machine for converting scrap into smiles

Robots and children. Children and robots. Whatever the age, whatever the gender, there seems some almost mystical connection between the two. We’ve seen it enshrined in films and toys pretty much since the idea of a robot was first mooted. And now children’s app developer Toca Boca have made the link on iOS with Toca Robot Lab.

The app features two distinct phases to play through. In the first instance you build your robot, picking its legs, body, head and left and right arms from a selection of scrap metal parts. For each body part there are three options to choose from, and the options vary on each play; chosen randomly from what appears to be a very large pool indeed. Once your robot is active, you get to fly it through a test area full of collapsible obstacles searching for three stars and the magnet that ends the course. 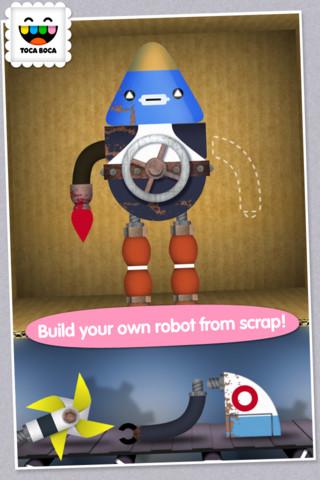 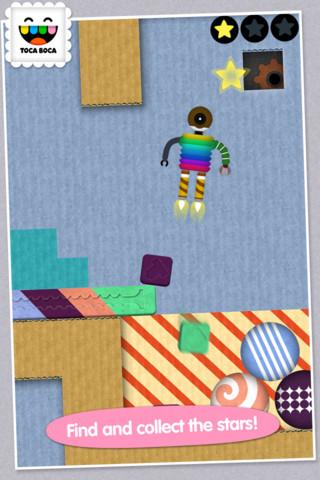 That’s it. It sounds absurdly simple, and it is. It’s a children’s game after all, and the concept and controls are suitably simplistic and easy to grasp. The robot is built by dragging the selected part onto an outlined area, but it’s very forgiving of poor accuracy. To fly your robot around, you just pull it on the screen in the direction you want it to go. Simple, intuitive, requiring little or no adult help. But even then, surely, it sounds far too simple for all but the very youngest, right?

Well that’s what I assumed when I first played it with my six and two year olds. I was disappointed: it’s a popular and highly regarded app and I’d been expecting more. This, I figured, looked fun but wouldn’t have much longevity – especially for the eldest one.

It’s become my youngest’s favourite thing to do on the iPad. It’s still a popular choice for the six-year old too. And when you watch them playing, it’s really not hard to see why. The available choices for the robot body parts are extensive, and only displaying three at a time means that brand new options are frequently available on different playthroughs. With five different parts to interlock, it means that every robot is unique. In a particularly delightful touch, many of the heads feature blank screen that flicker into life with mischievous expressions when soldered onto a body, creating further surprises.

The course the robot then flies through is, in a minor stroke of genius, basically a sandbox game for children. It consists of a simple maze that’s randomly generated each time, and is usually large enough to encourage exploration but small enough to present little difficulty in navigation. It’s full of stuff they can interact with: balls that roll, girders that topple, blocks that fall and, of course, they have to keep an eye out for the stars and magnet. Such is the attraction of this space that older children who’d have no trouble finding the exit will still fly their robot round all the corners, looking for things to knock over. 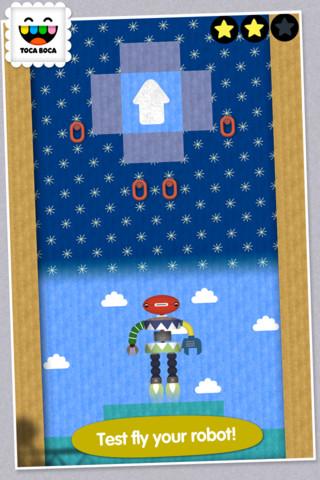 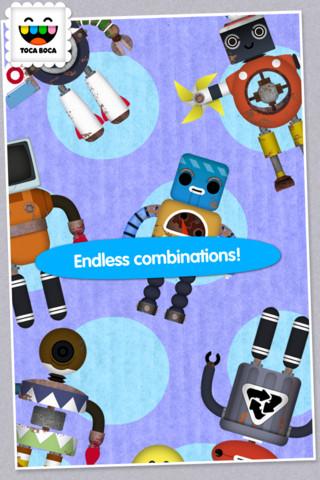 The real kicker, though, comes from the fact that the app combines both elements together. The kids aren’t flying any old robot through a maze, they’re flying a robot that they designed and built; a unique robot that almost certainly will never exist again. Even the very young intuitively appreciate this connection and delight in spending time testing and playing with their creations, feeling that sense of ownership and involvement. It’s the secret behind a lot of popular children’s toys and apps, and Toca Robot Lab nails it near-perfectly.

Its appeal is aided by clever graphic design that strikes a wonderful balance between cute and mechanical. Robots are made of scrap metal, but it’s scrap with smooth rounded corners, pleasingly patchy paintwork and gloriously rotund cylinders. Sound effects are limited but appropriate and clear, and the whole is supported by a jaunty soundtrack that doesn’t become annoying over time.

It’s hard to fault Toca Robot Lab when it brings so much obvious pleasure to the children who play it. Could it perhaps have used a few more interactive features in the test course? Yes, probably. Maybe a little more animation of the finished robots? Fair enough. But it does what it does with such skill and enthusiasm that it’d be churlish of me to criticise it too much. Give children the chance to become robot engineers in the Toca Labs, and see what they create.