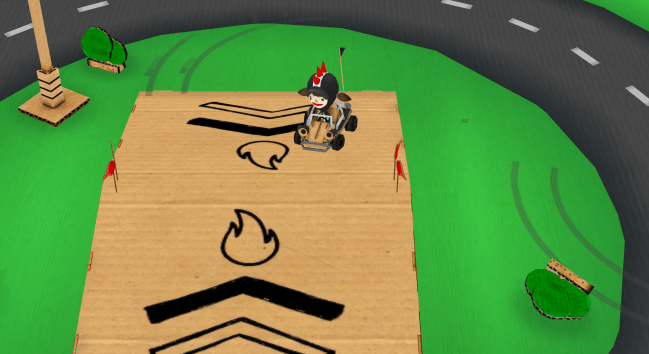 Driving your kids crazy in the best possible way

Toca Boca has become a byword for quality in children’s apps. Their games encourage exploration and experimentation, yet come without any hidden in-app purchases or other hidden nasties. Recently they’ve boldly started branching out into apps for slightly older kids, starting with Toca Builders and now moving to the racetrack with Toca Cars.

Like all their other games, it’s incredibly simple to pick up and play. You choose a racer and then start steering them around a virtual environment simply by touching the screen in the direction you want to move. As you drive and skid around, you’ll encounter houses, traffic lights, trees, and other bits of scenery you can bulldoze over and push around. Wreak too much havoc and there’s a simple button press to reset everything again.

But you’re not limited to just knocking things over: many of the things you’ll encounter are interactive. Most obvious are various ramps that allow your little racer to pull off different kinds of spins and jumps. There are puddles of paint to drive through and color the world with tire tracks. Best of all are the other characters, an irate robot that pushes you away, a shy bird that flees and hides, and an enthusiastic dog who follows you about.

Each time you start the game, a random new layout is generated for you to enjoy. But driving is only half the story. You can also build your own tracks with a sandbox editor that’s just as accessible as the racing. Just drag things off a roster at the bottom of the screen and onto your level, and then when you’re ready press a button and presto! You’re driving in your very own, personalised world.

This two-pronged approach not only extends the play-life of the app, but it also represents some interesting opportunities for collaboration. The racing part of the game is easy enough for children of three, maybe even two, to pick up and enjoy. But they won’t understand how to build a level. Older siblings and parents, however, will. And my family has enjoyed some great times building tracks for my youngest daughter to explore.

You can’t fault the presentation either. Toca Boca has a distinctive and appealing in-house art style which is on display here. Most of the scenery is quite purposely drawn to show that it’s made of cardboard so there’s no need for alarm about knocking it all over. Racers and other characters are full of character and charm. Even the music, often a low point in kids’ apps, is pleasingly melodic.

If I had to pick fault with this, then I’ll pipe up and say it could have used a bit more variety, especially in terms of interactive characters. There are a lot of different kinds of ramp, but the tricks you can pull off on them are all pretty similar. And the three other characters, who share your world with their distinctive personalities, sometimes make you wish Toca Cars provided a few more to enjoy. 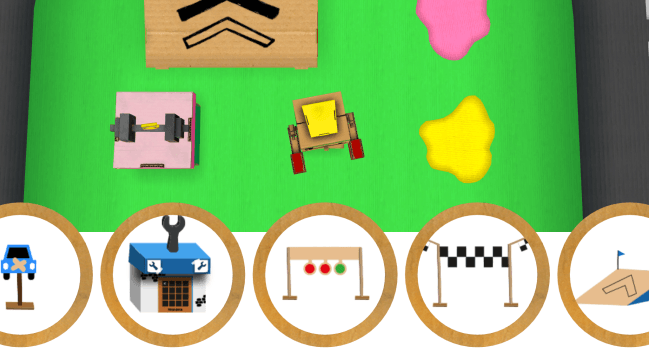 But when you see your kids really get into the sandbox and all the different things that can be achieved there, you’ll realize that’s a fairly small issue. Watch them chain the jumps together just to see what happens, or try and re-create their favourite corner of the local park, or just try and paint the town pink and you’ll see how much depth is possible with the limited tools at their disposal, thanks to the magic of a child’s imagination.

That legendry wellspring will run dry, eventually, and in truth my two little girls got bored of Toca Cars a little faster than I hoped they might. But their experience can’t really detract from the absurd amount of pleasure it gave me, both as a gamer and a parent. I think I enjoyed it as much, if not more, as they did. And for all of you out there whose kids like cars, or trucks, or deranged cardboard robots with an attitude problem: well, I can say without hesitation that this is for you.