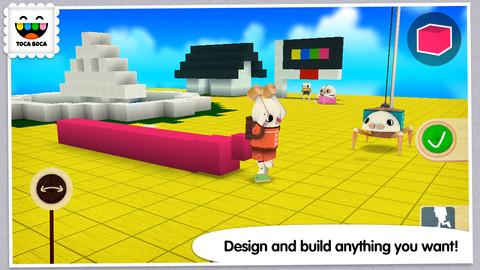 Building bridges, and spaceships, and watermelons, and…

Toca Boca has become the name to contend with in the world of pre-schooler apps. Apparently able to consistently make accessible, imaginative, fun apps out of thin air, their releases have become de-facto purchases for many parents. But, perhaps bored with the lack of challenge resulting from their mastery, they’ve decided to branch out into the realm of primary school children.

Enter Toca Builders, a game in which kids get to build three dimensional pictures out of coloured blocks. But by inverting the usual principles of simplicity, this app actually makes things more entertaining by putting a layer between the user and their goal. All the building is mediated by one of a number of cute robot helpers. One drops lines of blocks, another winches and stacks them, a third colours them. There are several others, and you need to make them collaborate to realise your dreams.

The interface for all of this is slightly trickier than Toca’s earlier apps. You’d expect that for the older audience, but this is perhaps ever so slightly too opaque: I had to sit and help my seven-year-old figure it out. The different robots all have slightly different controls although there is commonality: a trackball-type movement control is a particular touch of genius.

But those kinds of small challenges that the app puts in the way of building whatever it is you want are part of its appeal. If you could just conjure whatever blocks you wanted wherever you wanted them, it’d be amusing to doodle with for a while, but would quickly become boring.  It’s a very strange tension between free play, exploration, and simple challenge, which mostly manages that difficult balance but just occasionally falls off the side. 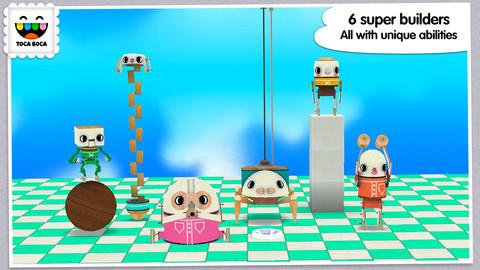 The biggest hurdle is high rise builds. One robot can build straight up, another can place blocks in the air but not on the floor, and then there’s the crane. That means things like tall walls can be a little tricky to put together. There’s also a fixed height limit of six blocks which can be frustrating for young architects, although it does help promote the use of pre-planning to get the desired design.

Kids are encouraged to persevere by the endearing nature of what’s put before them. All the robots are rendered with Toca Boca’s customary style and panache and are very appealing, each with its own distinctive character. As a further spur to their imagination, the blank canvas they’re usually presented with at the start of a new build is occasionally replaced with an already started construction: a simple harbour, for example, or a small wood. 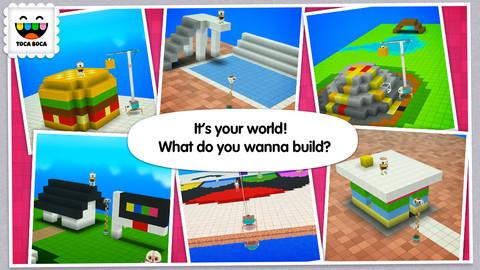 And once there’s a little heat under all those ideas that seem to bubble up so effortlessly from the developing mind, there’s no stopping them. You can build what you want, as long as it’s made out of blocks, although there’s one character who can produce messy splats of colour to enliven otherwise geometric design. The sky is the limit. It just so happens that the sky in this case is six blocks high.

There was little doubt that an app maker as accomplished as Toca Boca would fail to take the first step from pre-schoolers to junior school age kids, and Toca Builders proves it. There are some small teething problems, but nothing a little gentle parental encouragement won’t solve. After all, sitting down and playing together is one of the great pleasures of parenthood. And who knows, after they’re all tucked up and dreaming of their latest creations, you might well be tempted to try a little bit of building yourself.