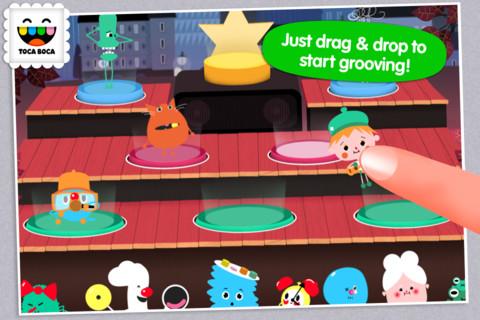 Toca Band is music to my ears

Swedish iOS developer Toca Boca has swiftly made a name for itself amongst parents thanks to its delightful range of games and interactive toys for young children. The latest app to join their expanding collection is the music maker Toca Band, and having enjoyed several of their previous offerings with my family, I wanted to know if this orchestra would also hit the right notes.

The setup is startlingly simple, even by Toca Boca standards. It presents a stage with three rows of placements where you can drag and drop a mixture of sixteen colourful characters. Each musician makes a different noise, ranging from percussion through to instruments and vocalists. When the musician hits the stage they start to play, and they make different sounds depending on which row you select: the further back they go, the louder and more vigorously they play. There’s also a star platform where each character gets to play a solo, their music directly under the control of the player instead of happening automatically as with the other spots.

All those different band members, each playing in one of four different styles, makes a lot of potential combinations. And as you choose a place on the stage for each player, the noise they make in that particular row is blended seamlessly into the growing chorus. And that’s the magic. It’s an app that allows little ones to make a fully realized tune of their very own without even trying; a fairly advanced music synthesizer masquerading as a toy box.

However, in order to work this wizardry Toca Band musicians all have to be singing from the same sheet. Literally. They all play variations on the same five chord progression. It’s a lovely five chord progression, melodic and funky, and all the different noises lend it plenty of varied sonic textures. But it’s still just five chords. Children love the repetition, but for adults the jaunty tune rapidly transforms from a catchy delight into an irritating earworm. And even kids get fed up with arranging variations on just one tune in the end.

To help engage them, Toca Band offers some quite wonderful visuals to go along with the audio. Each character in the band is unique, drawn in Toca’s recognisable and appealing style, and many are quite brilliantly bizarre. There’s a cat with a mouth full of ethereally wailing spheres, a percussive robot chef and my personal favourite, a little girl with a harp in her hair who sheds droplets of rainbow as the strings are plucked. In addition to making different noises in different stage spots, they also have different poses and movement routines, especially in the solo spot.

Soloists deserve a little extra attention both because they don’t rely on the usual interface and because it’s the only point where the player gets complete control over the sounds the musician makes. The normal drag and drop touchscreen interaction is simple enough for even toddlers to use, but they’ll need a bit of adult support to explore what goes on when controlling a soloist. Each character is played differently with a mixture of pushes and swipes, and older children get extra enjoyment from figuring out the different combinations. Many of the characters also permit completely discordant play when soloing so children get the chance to learn a little bit about what sounds melodic and what doesn’t.

There’s an awful lot to like about Toca Band. The wonderment and joy evoked when kids and adults alike encounter the possibilities of the app for the first time is truly something to behold. And when that glow has worn off there’s still plenty of band combinations to try out and soloist capabilities to explore. But sooner or later, the repetition of that tune is going to get you. And if it gets to you before it does the children well, the portability of your iDevice will come in handy as you dispatch them into a different room.