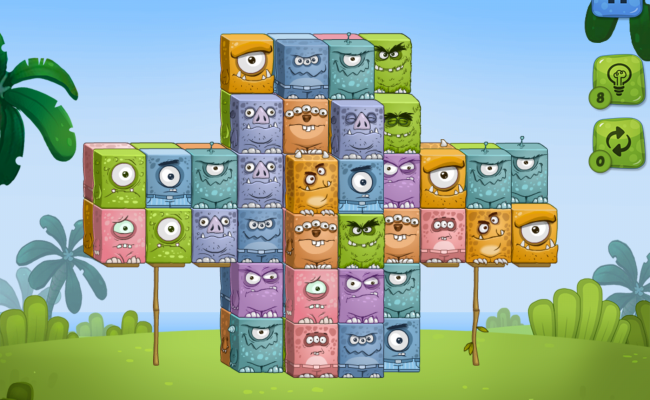 Maybe it would be different if I had grown up in Asia, but mahjong isn’t the first thing that comes to mind when pondering what would make a good mobile game for the whole family. Crazy Labs obviously thinks slightly differently than I do, which explains why Tip Tap Monsters is exactly what I just described. It uses inviting graphics and an intuitive interface to give it broad appeal, but not everyone will be crazy about the double-fisted monetization system.

If you’re not familiar with mahjong, it’s outside of the realm of this review to explain it. Suffice it to say that it’s a tile-matching game that was born in China many years ago, and it’s been turned into video games many times over. 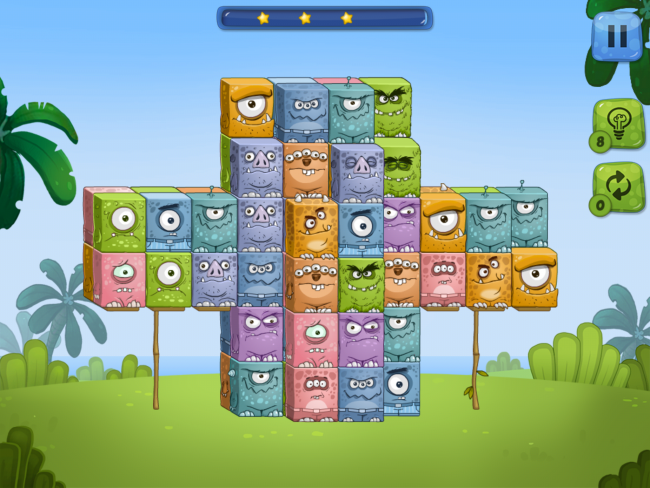 And yet, maybe not ever like this. Tip Tap Monsters replaces the tiles with cute, rectangular monsters, distinguishable from one another by things like color and the number of eyes they have. They’re animated too, blinking while they wait to be selected and jumping up and down when they’ve been picked as part of a match.

The graphics and island-esque music both helped attract my seven and five-year old children to the game like someone said free Disney World tickets were being handed out. They didn’t care or seem to want to hear more about how to play, but the first board is really a series of short challenges that explain the core mechanics is a very clear manner — like learning without even realizing it’s happening.

Otherwise, this is classic single-player mahjong at its core, meaning the goal is to clear the board by finding matching pairs of monsters. Matches can only be made if the monsters have at least one adjacent side free and have nothing on top of them. Occasionally the perspective makes it difficult to tell if a particular monster meets those conditions, but that’s a battle mahjong video games have been fighting forever. 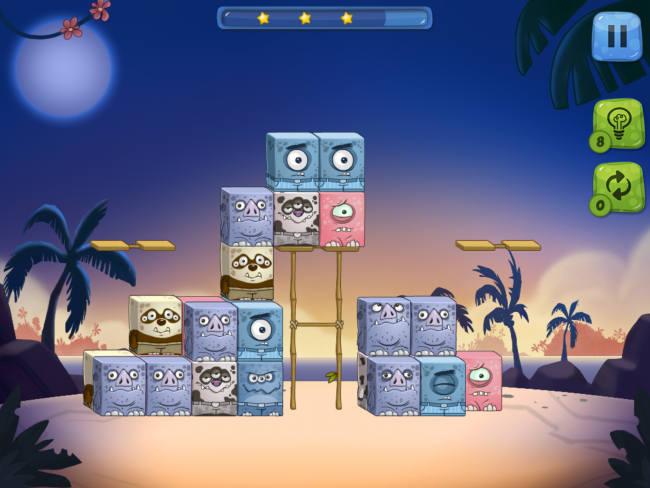 It’s possible, especially for younger gamers, to end up in a spot where the next legal move is not apparent. The game solves this in two ways: with hints that highlight the best possible match, plus a shuffle button that rearranges all remaining monsters. Both are extremely helpful and simple to use, but you get only a limited number to start and have to buy more via in-app purchases if you run out. That’s an obvious point of emphasis if you plan on letting your kids play.

Another feature that frustrated my son was the time limit for each board, as the difficulty ramps up pretty quickly trying to beat the clock. The timer can be turned off with a single tap, but you can’t earn any stars (each level grants a maximum of three, similar to Angry Birds or any number of other mobile games) unless you play with it on. 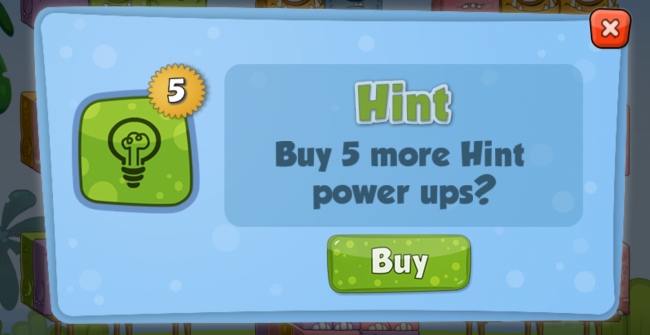 The first 10 boards are included with the free download, along with the first board in the Lost Islands, Moon Beach and Desert Island zones. To unlock the remaining boards, you have to pay — either one price to access all of the remaining levels or a smaller one to grant you one zone. Either choice will also get you a more hints and shuffles, and the former option also eliminates the pop-up ads you’ll sometimes see between boards.

Crazy Labs did a really nice job turning mahjong into something mobile gamers of all ages will want to try, but a really lousy job making it work as a free-to-play title with in-app purchases. I don’t monetize games for a living, so I’m not sure what the answer should be. Just be aware that if you’re a parent, you’re likely going to have to keep an eye on your kids playing Tip Tap Monsters and decide if you want to pay for more hints or shuffles.