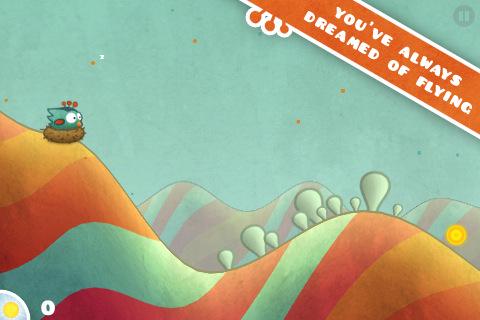 We spread our wings and fly in Tiny Wings, a true gem of an iPhone game

At this point I should really stop being so surprised when a unique take on something we’ve already seen a million times before hits my iPhone. Maybe it’s my console background bias where multimillion dollar projects tend to more often than not just play it safe. The iOS world is still relatively untamed, and there are great games being made by small teams of super creative people. Tiny Wings is one of those games.

Tiny Wings tells the story of a bird that just wants to fly, and he’s going to spend his whole day trying. His version of flying is mostly sliding along the ground on account of his tiny wings, but given some momentum he can experience the glory of temporary flight before coming back down to Earth. You make this happen by tapping on the screen to tuck in the bird’s wings to dive and let go of the screen to let him flap.

So you’ll let him flap his wings on the inclines and tuck in on the declines. This way you ride the hills on the ground faster and faster until you get airborne (Think kicking your feet back and forth on a swing). Then once you’re in the air you’ll tap to dive down trying to hit a downhill patch of land to regain speed and fly again. At all times you’re being chased by the sunset, and if it catches up to you the game is over. You’re just trying to get as far as you can before that happens.

There were a few games that Tiny Wings reminded me of straight away. The obvious one is Canabalt, the now standard iOS game where you run automatically and tap the screen to jump from building to building. Then there’s Solipskier where you drag your finger up and down the side of the screen to give your skier a path to follow, creating hills for jumping and what-not. The other that came to mind is the old Nintendo game Excitebike. When coming down from a huge jump in that game you could maintain speed by hitting the ground at a parallel angle and, at its heart, that’s the core element of Tiny Wings.

Learning the right time to tuck in those wings to drop back down to Earth is paramount to maintaining speed and outrunning the sunset. Once you play a few times you start to grasp the ebb and flow of the flying and landing, and you’ll quickly learn that hitting those declines at the perfect time just zips you along the ground at top speed to launch you and get the maximum amount of air. It’s a brilliantly simple mechanic that’s a little tough to pull off consistently, but incredibly satisfying when you do it. Even the bird looks a little impressed when it happens. 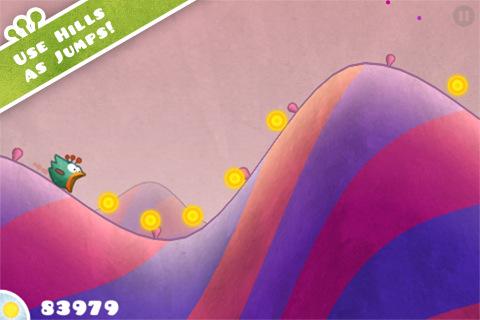 It’s always a good sign when I need to tear myself away from a game when it’s time to write the review, and even now in my head and I can see the up and down motion of riding those hills in my head. There’s not much else to the game, but it offers enough new that from now on when I want a quick jaunt with my iPhone I won’t turn to Canabalt, but Tiny Wings. I can’t think of a way they could improve it.

How can a one button game be so gratifying? A game like Tiny Wings shows us that a very simple concept can be deeper than it appears, and offer a great experience for both people just trying it out and those who spend time to really get good at it. This is truly a must-have game for the iPhone.