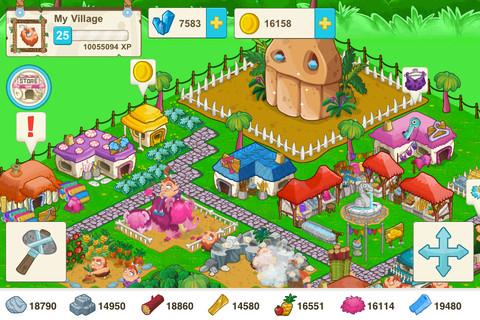 Fret not the tyrannosaur as the magic stone will provide the protection needed as players construct their own prehistoric town in Tiny Village. Developed by TinyCo, the free-to-play title is a virtual space city-builder type of game. Perhaps best described as Trade Nations meets the Flintstones, the application presents itself with a fun and quirky style, hosting a people that have an, evidently, very small gene pool.

Chased through the woods by a hungry T-Rex, a pair of cave folks stumble across the safety of a magical rock bearing mystical crystals. Upon the stone’s driving of the dino away, the pair begins to build their village around the object, and thus the player steps into control. The idea, though, is one that’s been seen a dozen times before: Build a thriving society.

Unlike most of the games of this style, Tiny Village doesn’t model itself as much off of Smurfs’ Village, but is more reminiscent of Trade Nations sans the social aspect. This means that players must manage several different elements including resources, population, and income.

In terms of the first, there are several to be concerned with, which include crafting items such as stone, wood, food, and so on. Like Trade Nations, each resource collecting facility requires workers to function, thus houses must be constructed to increase population. Should no room for houses be available, players can also temporarily hire a worker for eight hours. When resources are gathered, they are hauled off to a storage unit (which can be expedited through the use of a second worker) for use in constructing new buildings or in earning some coin.

The primary revenue stream for Tiny Village stems from various trade stores that can be created. These Flintstone-style storefronts make use of specific types of resources to create various objects that range from rope to hammers. Like most apps of this nature, the items can take anywhere from 30 seconds to several hours to complete, with the longer ones being worth more money in the end. What is also nice is that income also generates through every home and decorative item in the game (do not ask how a palm tree pays “rent”), adding incentive to make one’s town actually look nice.

Over time, many of the buildings — such as the homes — can be upgraded. However in order to do so, players must periodically upgrade the mystical stone itself as they level up. That said, doing so requires a tremendous amount of resources. Surprisingly enough, these resources cannot be bought through in-app purchases. The only things that can are the primary in-game currency of “Coins” and the virtual currency of “Crystals.” These are used to instantly finish the construction of buildings or items as well as purchase premium structures that produce resources more quickly. That in mind, the costs range from $0.99 to as much as $99.99. 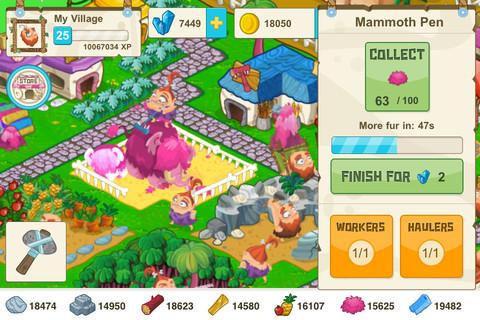 In order to guide the player through the whole of Tiny Village, the game follows the typical quest system. As users build up their stone age home, different quests will appear, tasking them with the building or creating of specific things. It’s nothing extraordinary, but they do often reward players with a respectable amount of Crystals. It’s not enough to buy the big-time premium buildings, but it is enough to speed up a few processes now and again.

There really isn’t much of a negative to be had when it comes to Tiny Village other than the obvious. Simply put, the game isn’t terribly original. Nothing it does is truly ground breaking and, at best, the upgrading of the magic stone (to upgrade other buildings) and decorations paying “rent” are the only things that remotely stand out. That isn’t to say Tiny Village is bad. It is a solidly made game that has a quirky and amusing style all its own. Considering that the allure of these city-building and virtual space apps heavily revolves around décor, the new aesthetic is a nice change of pace. That in mind, if you’re a connoisseur of such titles, then this is an app worth checking out.