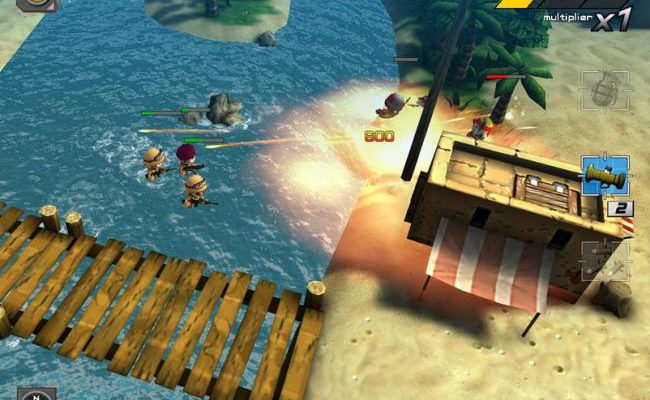 Who ever said big guns don’t come in small packages?

Chillingo released the first Tiny Troopers game back in June of 2012 to much acclaim, so a second tour through this miniature warzone didn’t seem like too far-fetched an idea. While Tiny Troopers 2 might play it safe as far as sequels are concerned, the sprawling battlefields are more vibrant, the action is more precise, and your troopers are back and still as tiny as ever in this fun and quirky shooter.

If you’ve played the first Tiny Troopers game, then expect to find more of the same here in Tiny Troopers 2, which is not necessarily a bad thing. The presentation is as slick and shiny as ever, and the designs of the troopers are just so adorable: especially with their little waddling animations, and the seemingly never-ending cute name generator for new additions to your troops. But don’t be fooled by the cutesiness of tiny troopers named Buster or Nasir: this is a game that is all about action, and once you’ve developed these strong attachments to your little pint-sized soldiers, the developers have no remorse about showing them getting gunned down and dying in a hail of enemy gunfire. 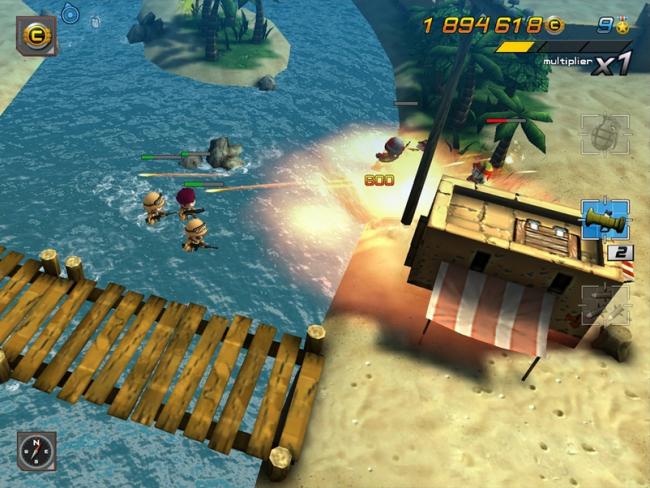 Like its predecessor, Tiny Troopers 2 utilizes an easy-to-pick-up one-touch control scheme, which lets you move, fire, and dodge all with a single tap of your finger. You can even swipe up on the screen in a vertical line to duck and take cover from a nearby explosion, which I found to be a really neat touch. The only real problem I ever had with the controls was when I wanted my tiny squadron to do something near the top of the screen, and my hand would inadvertently block most of the action on the battlefield, and leave my team vulnerable to blind spots as I issued these commands.

Tiny Troopers 2 features three different operations with seven missions apiece, and a fourth blizzard-themed operation that’s promised for a future title update. Most of the missions will revolve around you getting from Point A to Point B, while eliminating whole infantries or destroying enemy structures like radio towers along the way. As an added objective, you can also hunt for collectable dog tags and rare war medals during each mission, and each map is very generous in size with tons of nooks and crannies to wobble through (or maybe it just seems that way because your little troopers are so small!). The war medals have a dual function as the higher form of currency in Tiny Troopers 2, so if you come across them while you play, then you’ll actually be able to afford some of the higher-tier items in the game store.

The game manages to change up the pace for a bit every now and again with fun rail-based scenarios that have you riding on a fixed course inside a devastating tank, however, the inability to purchase new abilities or health upgrades for your tank in these levels makes them incredibly frustrating – especially when you’re playing on the highest three-bullet difficulty setting. When enemies are bombarding you from every direction on the screen, pretty soon that one-touch mechanism starts to feel very limited. I’ve never rage-quit a game by throwing my iPad at a wall before, but after 30-plus attempts at the first tank mission in Operation 1, I sure started to think about it. 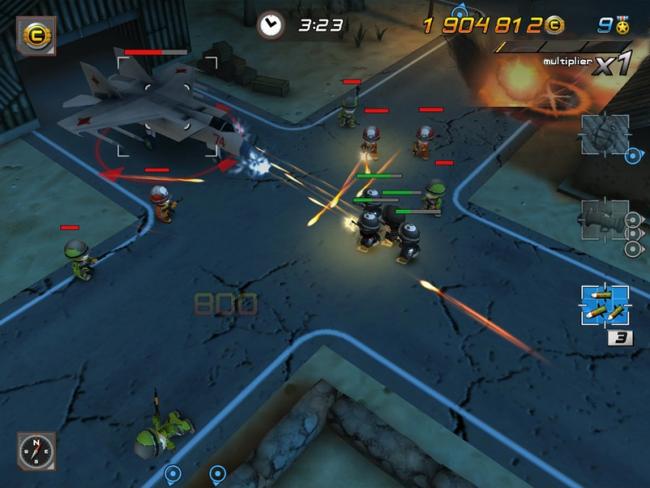 But putting my pent-up rage aside, there’s no question that most of the games features are to be applauded.  My personal favorite is the new zombie survival mode, which is almost a given for any war-based action game these days. As you might have guessed, the goal of each zombie round is to survive for as long as you can against endless hordes of the undead using limited resources. There are three different maps of zombie-gunning action to try, and a nice variety of undead archetypes to encounter. A few zombies will even projectile vomit at you, which is pretty gross, but also pretty awesome.

But while the zombie missions are a great way to get more out of the game once you’ve finished the fairly short campaign, I would have loved to see the scores earned in these arenas be translated into your overall currency.  This way you could play them as a means of powering up your troops to take on the higher difficulties in the primary campaign.

Even though Tiny Troopers 2 may not have set out to redefine the Tiny Troopers franchise, the game still functions as a fairly impressive sequel with great visuals, fun gameplay, and a perfect balance of depth and pick-up-and-play accessibility. Despite a few issues with the one-touch controls (and an inherently frustrating difficulty spike in some of the tank-based levels), the troopers’ second outing is still able to stand tall among the other units of the mobile gaming war.