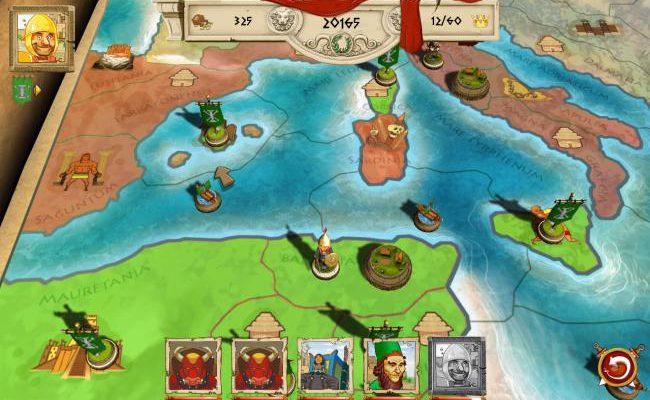 When done right, genre mash-ups can create some incredible games. Just take a look at Puzzle Quest or Quarrel. Tiny Token Empires, a new mash-up from developer BiP media, joins their ranks with ease. It’s like someone took Puzzle Quest, Risk, and Civilization, put them in a blender, and set it to awesome.

Set in the days of classical civilizations, players will select from one of five armies; the Greeks, the Romans, the Egyptians, the Carthaginians, and the Persians. Their goal? To conquer the known world! (which at that time consisted of little more than some of Europe and a bit North Africa). To do this, players will move their armies across the map, conquering different countries as they go. They’ll set up cities, build fortifications and barracks to train different types of military personnel, and venture forth to become the top dog of the ancient world.

Once your army encounters an opposing army (or barbarians residing in unclaimed territory), you’ll do battle by playing a lengthy round of match-3. I say lengthy because, unlike most match-3 games where you’re simply looking to make the next match as quickly as possible, Tiny Token Empires forces you to rethink the way match-3 is played. Each member of your army will have a power meter, and that meter will be attached to a certain color on the match-3 board. Every time that color is matched, their power will increase. Once full, you can choose to unleash a devastating attack on the opposing army.

While it sounds simple, there’s a good deal of strategy that goes into every turn. For example, if you have two of the same military type in your army – let’s say they both use red – then matching red could be a good move because you’ll power up two troops simultaneously. Or maybe you can’t find any helpful matches – so what does your opponent need to match? Can you steal their next move?

Different troops have different strengths and weaknesses, and heroes can have special artifacts that will benefit different members of your squadron. Combine that with other on-board bonuses, like how matching 4 nets you an extra turn, and you’ve just turned match-3 gameplay into something that now requires a surprising amount of strategy and thought.

If doing this turn after turn isn’t up your alley though, the developers have provided a handy shortcut. You can click a button to simulate the match, and it will give you the most likely outcome given the combatants both sides have committed. It’s never going to perform as well as a player potentially could, but if you’re looking to speed things along, the value of this can’t be understated. 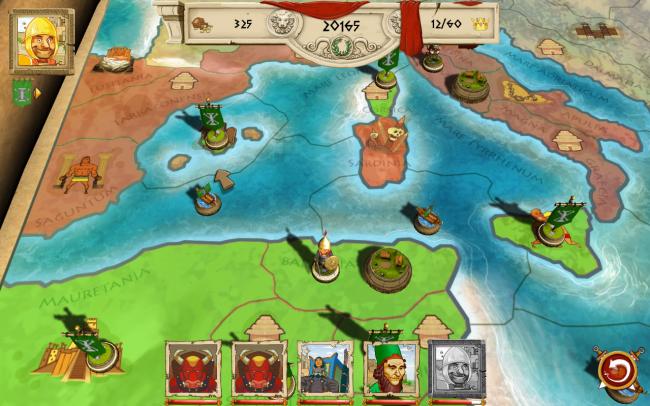 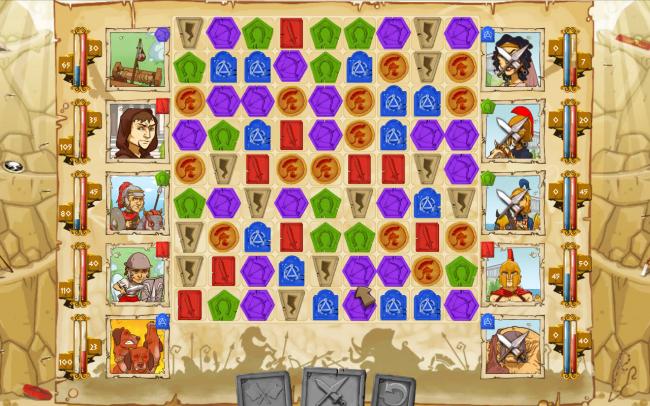 Of course, if you’re looking to speed things along, you’re probably playing the wrong game. Tiny Token Empires is huge in scope, with a single session potentially lasting an hour – or even hours. You can always save and come back though, so there’s no need to worry about not having the time finish a game in a single sitting.

In addition to the “take over the world!” gameplay, there are a variety of other modes available with different objectives, each of which allow you to customize the number of participants and difficulty. There’s also a campaign mode for each nation, and while the first four missions essentially serve as a tutorial, the remainder offer plenty of challenge as you’re tasked to complete specific scenarios.

Like the gameplay, the presentation here is absolutely spot on. The world map has a lively, realistic feel to it. The character art has a goofy, cartoony feel that offers plenty of personality. The writing is funny, the music is epic – there’s just not a single thing to be disappointed with here.

In fact, we really have no complaints at all with Tiny Token Empires. Are there things that might make the experience better? Sure. The game has no multiplayer, and it seems like a perfect candidate for local or asynchronous play. Likewise, while the map it offers is huge, having a selection of maps might have made this a slightly meatier package. But in the end, the sheer amount of content you’re already getting is more than enough to satisfy any gamer.

Taking over the world is a lofty goal, be it for a player or a developer. But as far as unique mash-ups go, Tiny Token Empires might just be the best we’ve seen yet. Demanding a good deal of strategy on multiple fronts, gamers with a thirst for global conquest and a taste for fantastic gameplay owe it to themselves to pick this one up.